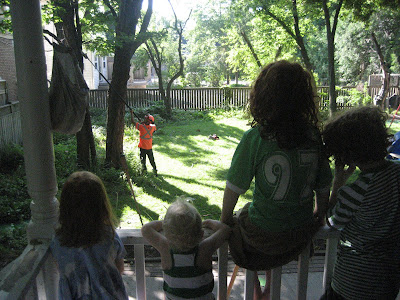 Here’s what’s happening in our yard this morning. Add in the sounds of the children yelling over the chipper, and you get the full picture.
Below, our Monday evening activity. Also better than television. Add in a popsicle and a scrounged-up frozen chocolate chip cookie or two, and Kevin’s soccer-playing night looks a whole lot more fun for this Mama. 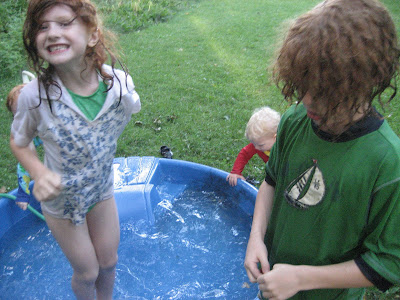 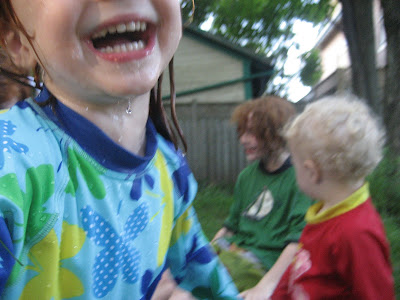 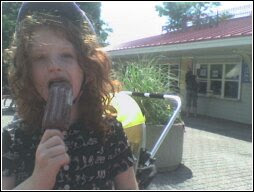 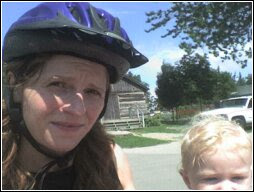 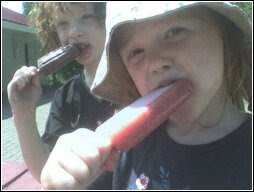 Roused myself this morning after a too-fun evening out with siblings last night, and organized the children for a bike adventure. The photos are taken by my ancient cellphone (I got it three years ago, which means in tech years it’s one hundred and thirty-three); here we are toward the end of our journey, when the children were splashing themselves liberally with melting popsicles. It got ugly. Well, it got sticky, to be more precise. There was some semi-serious discussion of whether hands might get glued onto bike handles, that’s how sticky it got. But prior to that, we biked all the way to Columbia Lake and picnicked in the shade on a hill overlooking the water, a field of black-eyed susans waving below us in the cool breeze. The only thing that could have made the event ever so slightly more charmed would have been the addition of Kevin; though I actually find the children are better behaved, and rise to the occasion more earnestly, when they are being supervised by only one parent (why is that?). After lunch, we followed the gravel trail along the stream and found a patch of red raspberries. I almost encouraged the kids to clamber down a steep hill into the swampy creek, but thought better of it. We biked amidst the lunch crowd on the trail going through campus, and the concession stand at the park was our final stop. With the exception of one small meltdown over having to share the much-coveted slushie (our newly four-year-old girlie is still learning to control her impulses for “now, now, now!”), by the time we were home the children were in a blissed-out state. CJ crawled out of the bike stroller and into the sandbox where he spent almost an hour, the big kids read on the couch, and I sipped a cup of cold coffee (let’s pretend it was iced) on the back porch while browsing the paper.
And I’m ever so reminded of why I love summer. 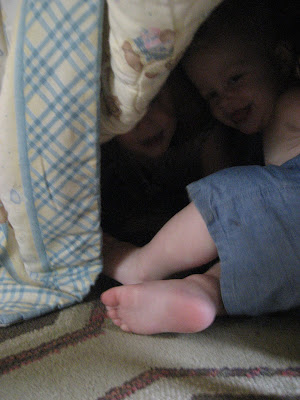 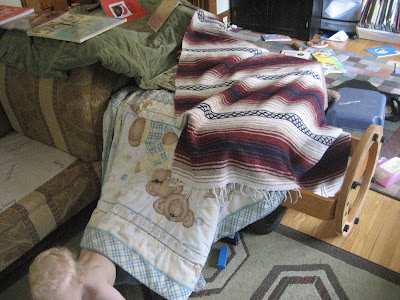 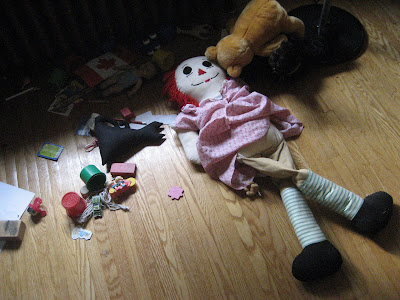 Alright, I’ll admit it, we’ve been bored. What am I doing wrong here? We have the scheduled activities, the swim lessons that eat up the better part of the morning, with bike riding and snacks included. And this afternoon we have the playdates to coincide with naptime. We have the free play, open permission to upturn chairs and couch cushions, to layer blankets, to strew about toys. We have library books. We have siblings. We have bread baking mornings and cookie baking afternoons. We have an enviable backyard. We have day trips planned and accomplished. And yet, and yet … We have back-talking, complaints about the service and the food, we have biting and kicking and general restless rolling about, we have nagging and ignoring and tears. I wonder how homeschoolers manage this. In theory, I’m all for a bit of necessary boredom. In theory, it should push us toward creative solutions; and sometimes does nudge the children toward playing together, and making up their own games; but just as often, in practice, boredom seems to breed conflict. It’s like, with nothing better to occupy the human mind, inventing some trouble is a satisfying interim solution. I see this played out in miniature all day long, and frankly, it grows a little tiresome. Can’t we all just get along? I ask. And am treated to, at best, blank stares, and at worst, piercing moans of misery, wails of “it’s not fair.”
On a separate but not unrelated note, in reflecting on our recent family “holiday,” I’d like to use my friend Marnie’s rather brilliant phrase: such adventures shouldn’t so much be called family holidays, as family “experiences.” Yup. That about sums it up. “Holiday” is a word overloaded with expectations, none of which are remotely fulfillable with four children in tow. (Relaxing, rejuvenating, restful … uh, no, no, and no). “Experience” on the other hand … now that’s the truth! And it’s not a bad thing, either, the family experience, especially when it’s not trying to be something it’s not. Our recent family experience was all the things you might expect it to be: busy, rife with detours, noisy, active, mosquito-bitten, containing mysterious ailments, brief respites, good food, necessary disciplinary tactics, all in all a touch of the arduous and a touch more of ardour. Good times.
I’ve been writing this whilst overseeing two playdates, ear to the naptime baby monitor, bread baking in the oven, and my interruptions have included: tossing snacks at hungry children, sandbox mediation, and a young man in construction garb at the front door to inform me our water will be shut off for the better part of tomorrow and Friday.
Thank goodness for this cup of “Less-Stress Tea” (courtesy Homestead Herbals at Little City Farm, via Nina’s buying club). 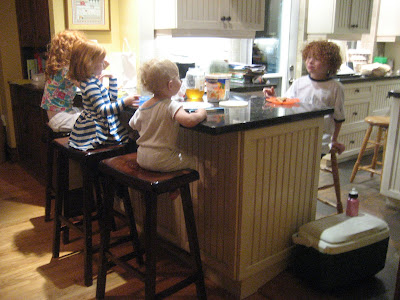 Figuring out (or remembering), based on today’s success, that a mixture of planned and spontaneous is the way to increase each day’s pleasure. We started swim lessons this morning, a two-week every-day stint that unfortunately won’t include CJ, whose session got cancelled. But he comes along anyway, and proved easy to entertain today, as we spent a great deal of our time coming in and out of various changerooms with various combinations of children in various stages of wet and dry. We transported ourselves to and from using the bike/run combo, which makes me feel fit and fitter, and ate a snack at the nearby park after swimming, then went onto the library to refresh our reading material. Home for lunch, siesta, and cookie baking. Yesterday evening, while Kev played soccer (almost the whole game … on that knee … he came home and iced it for ages), the kids and I biked/ran to the zoo at the park. Not an especially exotic zoo by any stretch of the imagination, but absolutely thrilling to the smallest of our crew, who almost lost his mind with excitement–uh, Mama, can you believe this, like, seriously, I’m going to have to crouch over, point and scream, because I think, if I’m not mistaken, that what we have here before us is a DI-DI!!! And another, and another, and another!!! Bunnies, deer, a cow-like animal, miniature horses, donkey (“what’s the difference between a donkey and a horse?”), goats, sheep, peacocks, and two piglets (“Look–‘these two little piggies are not going to market’. That’s good, right Mom?” “Hmm, it says that every year, but I have my suspicions …”). We snacked beside the deer, and arrived home in time to brush teeth and go to bed: perfect timing. Alone, at last, I indulged in the Bachelorette while folding laundry because heaven help me, I’m a summer reality television addict (not recovering). This afternoon, figuring they’d gotten a good dose of healthy exercise, I gave into the three oldest children’s pleas for “screen time” and let them spend our siesta playing on the computer; which meant that I couldn’t. So I read instead. It was LOVELY. At least as much fun as Facebook. Simple pleasures.
When I started this post, CJ was sitting at the counter on Albus’s former stool, proudly eating a cookie fresh from the oven; he’s now “dow, dow” and bringing me stuffed animals, kissing them, telling me stories, imitating their noises “woo, woo,” and requesting attention, please, Mama. Supper’s well underway (brown rice in oven; beans already cooked). Sure, kid. Meow, moo, peep. 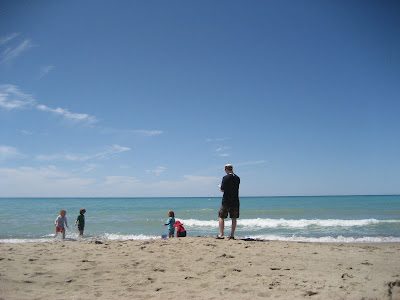 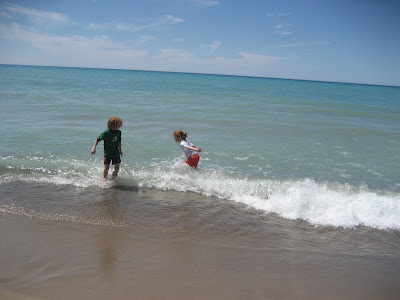 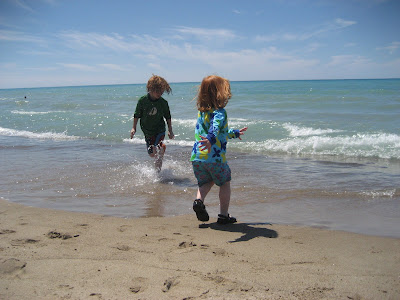 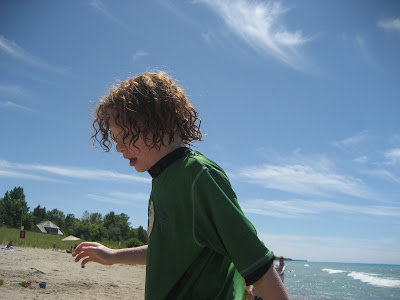 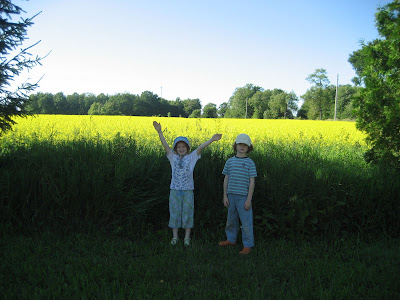 Would you guess the temperature is 18 degrees Celsius, and the water in Lake Huron approximately two degrees above freezing? But our afternoon on the beach was entirely summery, with awkward sunburns to prove it (under one eye? backs of knees? the exact spot where Kev applied sunscreen to my spine?), and included burying each other in sand, searching for fossils in tiny stones, building a castle/moat, eating ice cream and french fries, and ending the day at my brother and sister-in-law-to-be’s nearby farm. The surrounding fields of canola are stunning, fluourescently yellow, glowing in the dusk. We finished the day with a campfire.
Now it’s Monday morning and I feel Monday morning all over … the kids are outside in the hammocks having the following conversation: “What’s Mommy doing?” “She’s inside.” “Do you know what she’s doing?” “She’s playing on the computer.” “No, she’s working on the computer.” “No, she’s playing.” “Grownups don’t play on the computer.” “I think she’s checking her me-mail.” Now that’s a good word for it.
Can anyone see CJ? 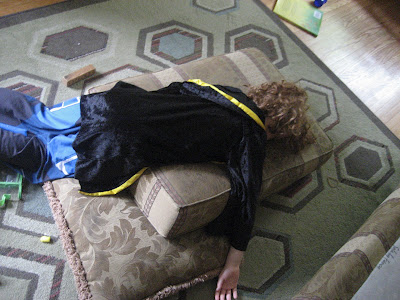 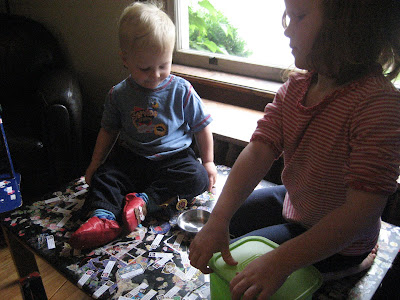 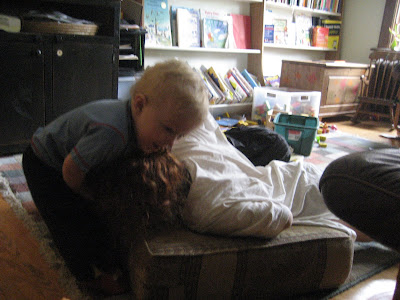 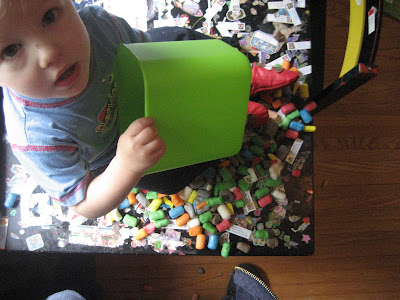 The weather isn’t cooperating with my great Outdoors Summer Plan. So we’re getting into trouble indoors instead. Actually, I think that’s okay. Things picked up after this, at least briefly, and for some of us. CJ maintained a non-stop screeching, complaining riff (could be the new tooth pressing against the gum), but the big kids dragged themselves off the floor to play Jr. Monopoly together. We ate what amounted to lunch. I had a cup of coffee. Could be worse. Boredom is good for the soul, in the small tolerable doses, that is. Pushes its sufferers toward creativity. One hopes.
I’ve had requests for my granola and quiche recipes, so will post those at some point in the near future. Meanwhile, it’s Siesta Time. What am I doing standing here typing?
Page 17 of 17« First«...10...1314151617