The gift of a story, told 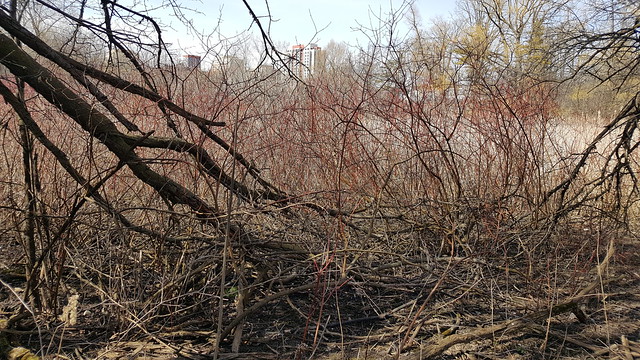 I have to highlight today’s featured X Page story, “The Virgin,” which is accompanied by a recorded performance of the stage version of the story. If you have 4 minutes, please take time to listen to Anandi tell her story in her own voice (video embedded below). The written version is longer and has more details, but both versions are equally expressive and funny, told from the perspective of a child who becomes a participant in a ritual she doesn’t fully understand. I was privileged to hear the original draft of this story read out loud during a small group session. It felt like we were right there in the wedding tent, the air bright with saffron, experiencing this memory along with Anandi.

Here is the link to Anandi’s story, “The Virgin.”

Today, I’m drinking a cup of turmeric tea and thinking about the rare and unusual pleasure that comes from hearing a story, freshly written and read out loud in the author’s voice.

The word that sparked Anandi’s memory during that workshop session was “gift.” Seems appropriate. 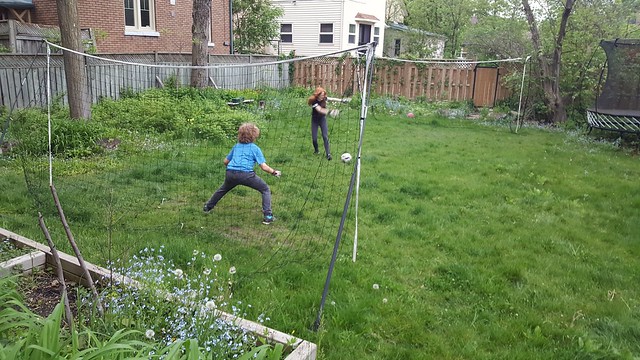 As I drove the back roads, early this morning, following gravel trucks and farm machinery and backlogs of commuting traffic toward Orangeville, and beyond, to the 404 north to Barrie, where I was meeting a book club at a care home, I noticed my breathing. Sometimes I noticed that I was holding my breath. Sometimes I noticed that my breathing was shallow. Other times, I would draw air deeply into my lungs and exhale — and that felt good.

I was afraid of being late.

But what if I were late, would that constitute a crisis? No. Deep breath. Ah. 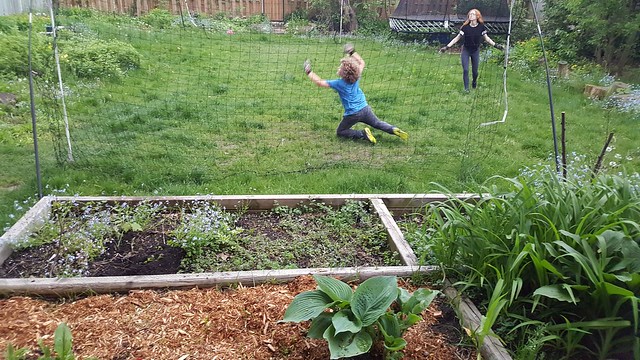 At the care home, I spoke for an hour to a group of older people, all women, who were interested in the life of a writer, and who indulged my passion for a feminist history of running and sports in Canada.

Driving home, my breath came more easily. I turned off the radio and let my mind wander. I thought about how my general life goal (if I were to put such a thing into words) is to express myself truly, to embody my values, to articulate in any setting my belief that experiences are what carry meaning in our lives, not things, not brands, not objects, but connections, being in the same place at the same time with the world that surrounds us, and being present there. In believing this, I open any experience to its potential to be meaningful, by which I mean: any experience has the potential to be purposeful, joyful, and deepening — to bring me closer to others, and closer to my hopes for who I might be becoming. 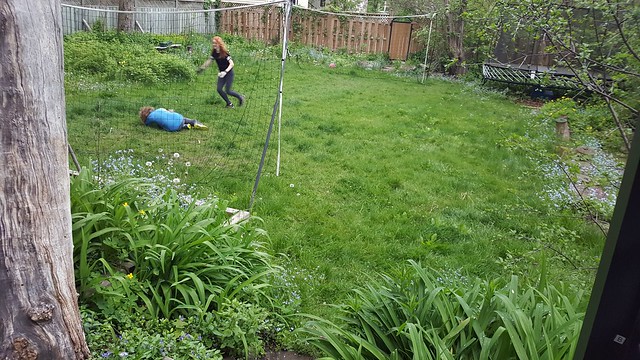 Waterloo friends, the Waterloo Public Library is helping me throw a launch party for my new picture book, Jammie Day! When: Saturday, Nov. 25 (that’s tomorrow), at the main branch of the WPL, from 2:30 – 4. Books will be available for purchase. Wearing your jammies is optional, but welcome (kids in jammies will receive a small prize; not sure whether this applies to adults, too …). I’ll be reading from the book and there will be music, crafts and a scavenger hunt.

The wild writers are coming to town 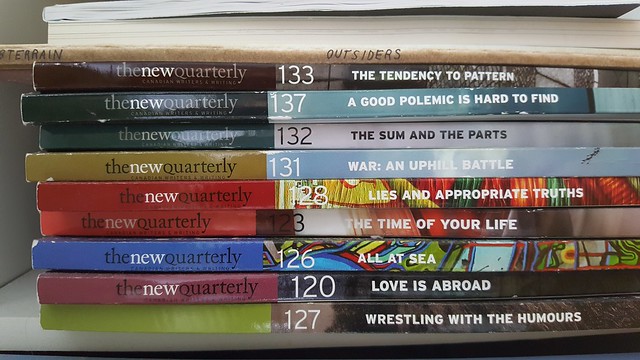 My favourite literary magazine, The New Quarterly, is hosting the fifth annual Wild Writers Festival at the Balsillie School in Waterloo, on the weekend of Nov. 4th, and I will be there too! Join us to share in the delight of the written word.

Details, including ticket information, are available on their website. Note that there are free events as well as ticketed ones. (My event is FREE, and I’ll be moderating a panel at 1:30 on Saturday on the subject of finding your voice in fiction, featuring the amazing multi-award nominee Kerry Lee Powell, Brent van Staalduinen, Kirsteen MacLeod, and Sharon Bala.)

Highlights from the rest of the weekend include:

On-stage interview on Friday night with Rosemary Sullivan, acclaimed biographer, most recently of Stalin’s Daughter, (and once-upon-a-time, my professor); Saturday writing workshops with Alyssa York, Isabel Huggan, Erin Bow, Michael Helm, among others; a “speakeasy” with Zarqa Narwaz on Saturday night at the Berlin hosted by my friend, and terrific writer, Tasneem Jamal; and Sunday brunch with, among others, 2016 Booker prize nominee, Madeline Thien.

PS To say it’s been a busy week/month/season would not begin to cover it. I’ve got more notebook exercises to share, and reflections on attempting to take a rigorous coaching course (mid-way through), and political thoughts aplenty, but this post, as is, will have to suffice for the moment.

I think I came to France … 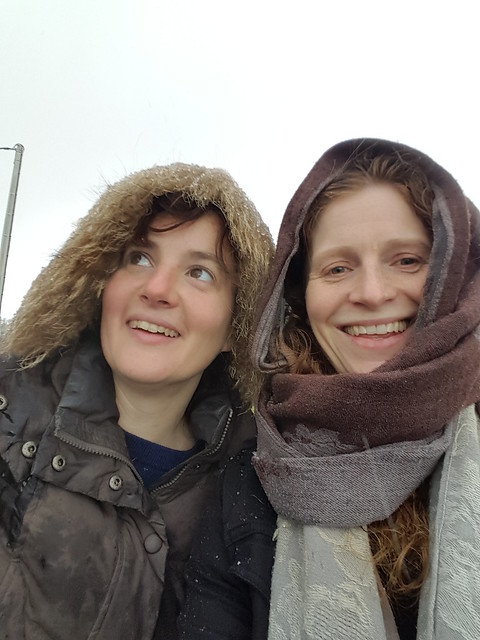 On my last full day in France, I went for one last walk on the Voie Verte, with Kelly Riviere, my collaborator, who translated and today performed my museum piece. I promised her that, contrary to its reputation, Normandy had been beautifully sunny during my stay, and as we set out, this seemed to hold true. We saw ducklings in a stream, a father fishing with his small son, families on bicycles. It was only when we turned around that we noticed the lowering darkening sky, and no sooner had we said, “Oh dear it’s going to rain,” then it began to rain. The rain came in the form of hail, icy fragments that melted on contact and soaked us by the time we’d reached the village again. But as you can see from the photo above, we appear to have a similar sense of adventure. 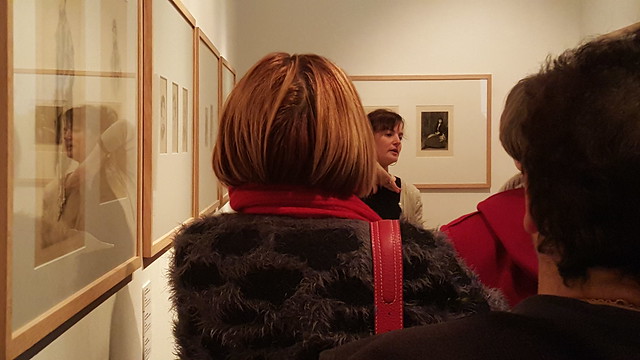 A few hours later, we’d dried off and readied ourselves for the performance at the museum. As planned, at the start of the piece, I positioned a chair and sat in it, laptop open, as if preparing to write about the paintings before me — the first paintings discussed in the piece. I was quite close to the paintings, and I sat looking at them as the room behind me began to fill. And fill. And fill. I realized, without turning around, that the small gathering we had expected was not small at all. Kelly began. And the crowd followed her and stayed with her — with us — for the entire time, as we moved through the museum. This was quite remarkable given the limitations of the space, and the size of the paintings or etchings, many quite small, which meant people were standing and listening to Kelly describe and illuminate a painting they could not see. 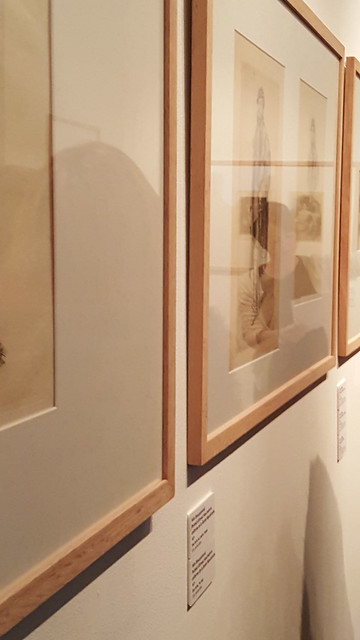 It was a moving experience, and unlike any I’ve ever had or expect to have again. And that sums up this whole trip, I think. This whole wholly embracing and embraced trip into what seems to be another world. One in which I’ve been opened, again, to the beauty of possibility, and the possibility of beauty. 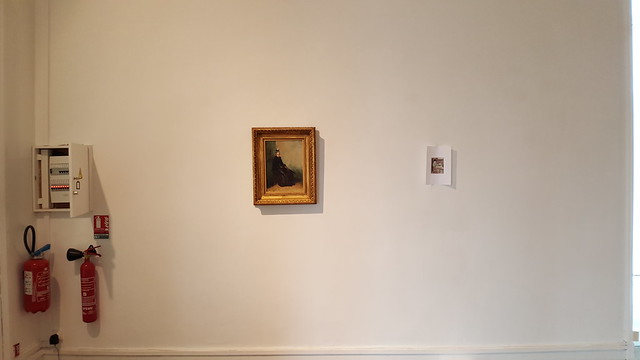 I’m excited to be going home. I can’t wait to see those beautiful faces again. But I think — no, I’m certain — that whatever comes next will be better because I’ve been here. And I hope to come back again soon.

I suppose I should know better than to blog under the influence of extreme emotion or wine, or, much worse, both, but here goes.

I am “home” from a truly wonderful evening that completely focused on and celebrated Invisible sous the lumiere, as Girl Runner must be called while I am in France. It was a truly remarkable evening. I can’t believe it, actually. Nearly three hours, all focused on Girl Runner. The first performer (above) was actually a writer, not an actress, a young woman who has already published novels herself and who is also a runner: she memorized at least half an hour of text directly from the novel and performed it — embodying Aggie at different times in Aggie’s life. After her performance, which was very moving, the same woman did a short lecture on sports and literature, and the book. This was followed by a second performance, a reading from the book performed by a male actor, who showed us a whole different aspect of Aggie’s character — her humour. The audience was really laughing. I started to think that I’d written not a novel but a play! When his reading of the text was done, it was my turn on stage for an interview, with a warm reception from the audience.

After all of this, there was a dinner for the artists. During which I had some wine along with the meal. And I’m only “home” now, and it’s after midnight.

I feel like I’ve seen something that I won’t forget, and also that’s changed my view of what I can do and imagine. Being in France has shown me Aganetha as I never saw her before, but it has also shown me something about my own writing that I hadn’t appreciated, somehow. I don’t know how to describe it. All I can say is that it’s amazing to feel such energy and to be in such a different creative space. This trip has been a complete gift. Full stop.

Tomorrow is the performance of my museum piece. And on Monday I come home. But meanwhile, here I am, floating.