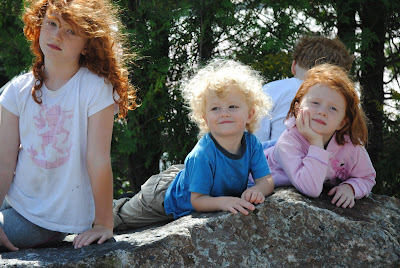 Feeling vaguely melancholy; end of summer-ish. Pulled into the driveway this afternoon and noticed fallen leaves on the pavement. noooooooo! But, yes, the days are narrowing ever so slightly. The early morning run happens at the edge of sunrise, not in full light, and nights are cool, almost cold. My sweaters are starting to look comfy and appealing once again. But I’m not done with summer yet! 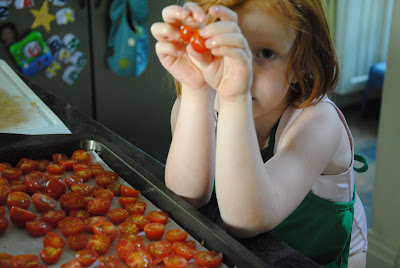 Witness, these tomatoes picked from our front yard veggie garden–almost exclusively cherry tomatoes, since that’s what we planted. I find the skins a little tough, so Fooey helped me make a recipe from one of her cookbooks, for roasted cherry tomato sauce. Nothing fancy, but it did require slicing each little tomato in half before drizzling with oil and roasting in the oven: Fooey’s job. Nothing makes her happier these days than a job. She is never more cheerful than when she’s been asked to help, and when the job’s done she declares, “That would have been a lot harder without me!”

Often, that is true.

The recipe called for a lot of fuss at the end because it had to be pressed through a sieve to strain all the skins out; only a whiff of roasted tomato remained in the sauce, which we tossed with hot pasta and served with queso duro blando, which I substitute regularly for feta. Albus declared it a bit bland. My kids are used to a chunkier sauce. I am not a sieve-it cook. So I won’t bother to post the recipe.

In other news, I am considering training to complete a triathlon. I am working out a regular training schedule, and I am even learning to swim (kind of critical to the whole triathlon concept). In fact, I think I’ve learned (front crawl, head in water, breathing to the side), though my neck feels a bit stiff after a lot of practice. The technique will need to be finessed, but I feel a sudden understanding for people who love to swim in all waters, even deep cold Canadian lakes … it’s peaceful under there, calm, all noises stilled except for the underwater sounds, and the sound of the body itself, experienced from the inside. I might just become a swimmer at the age of thirty-five. That would be something. I’ve always wanted to learn … and I’m not sure why it took me this long to jump in and try.