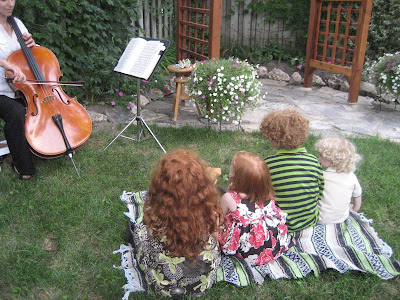 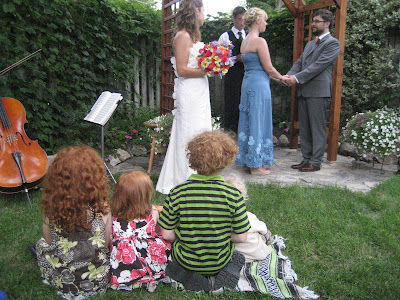 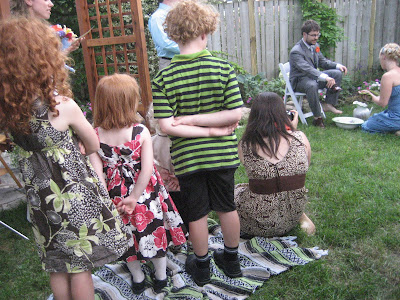 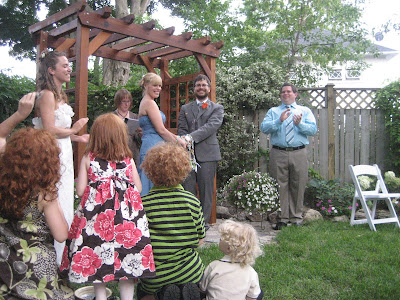 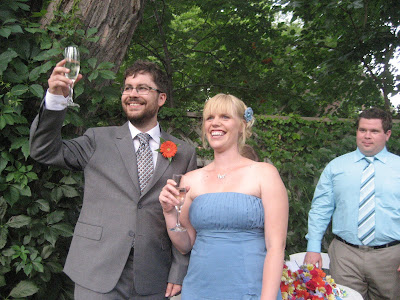 On the Soccer Sidelines

A funny thing happened at house league soccer this summer. Kevin took Albus to most of his games, and got to know some of the other parents. During one conversation, late in the season, a dad politely asked Kevin what I do, and Kevin said, “She’s a writer,” like he always says, bless him, and the other dad said, “No way! I’m a writer, too!” or something to that effect. When Kevin brought this discovery home, I realized how excited I was by the thought of having a sideline soccer chat with another writer. And it turned out that we did get to talk shop during one of the tournament games. Which made me realize how rarely I talk shop. And how lonely this writer journey has been. And how totally I’ve been responsible for my own isolation.
I’ve been thinking about the blog, recently, because a friend and new-to-blogging-blogger had questions for me, very interesting questions about maintaining privacy, deciding how much to reveal about the day-to-day major and minor life-changing events that affect our writing, about shaping a blog entry, and choosing a focus, and et cetera. I wish I could claim to have thought deeply about these issues; but the truth is that I’ve flown by the seat of my pants, and this blog exists and is maintained by instinct. Even the blog’s title was not something I spent hours pondering; in fact, it was the first thing that popped to mind. (I had been considering the possibility of blogging for a long time before I began, however; so maybe my subconscious had already worked everything out). I am surprised, now, that I was brave enough to choose a title that would out me as a writer, having spent a good portion of my writing career shrinking from that identity. I was not comfortable claiming to be one. On the other hand, I was extremely happy and comfortable with my identity as a mother. So, I preferred to answer the question, and what do you do?, by saying, I look after my kids.
In retrospect, I think my discomfort came from my exalted view of what it meant to “be a writer.” How could I claim to be something so wonderful and mysterious? Well. Sometime during the past decade, I’ve come to understand that being a writer is like being anything else, that it is a craft to be learned and practiced, and that talent is relative, and that saying “I am a writer,” does not mean the same thing as saying, “I am a writer of brilliance, and here are my many proofs and prizes.” It means saying, I practice, I keep at it and I haven’t given up, I am prone to moments of reverie and calm, I sit my butt in front of the computer and I translate experience through the lens of imagination into a structure that relies on words.
So, I’m a writer. I write.
And let me tell you how much fun it is to talk to someone else who does the same thing. This must sound fairly obvious to all of you who enjoy talking to your colleagues about work. But it’s only been very recently, just this spring and summer, that I opened up to the possibility whole-heartedly. Why has it taken me almost a decade to come around to appreciating this? If I’m honest, I’d say my barrier was basic insecurity. I was afraid of not being good enough, of my own competitive instincts to be the best (stupid competitive instincts; though I thank you for making me work hard); of competition itself, quite frankly, because a writer is self-employed and potentially fighting for a spot on limited lists with other writers, who are equally hungry. I can’t identify precisely what happened to change my point of view, but I don’t see it like that anymore. There is room for many. There is no “the best.” There is a good deal of luck involved in success, as well as talent and hard work. Anyone who sticks it out in the arts has my deepest admiration. And I celebrate all writers who break through into literary stardom (if there is such a thing).
All of which makes me a happier writer, and a happier person, too. And excited to talk shop, whenever the opportunity arises, be it on the soccer sidelines, over a bottle of beer, via email, or here in Blogland.
The link above is to a story written by the soccer dad, whose name is Tamas Dobozy. I’ll admit straight away that it is quite unlike the kind of story that I write, but it is damned interesting, and plays with ideas of identity and reinvention, of heroism and cowardice, and at the end you may be wondering, like I was, who is telling the truth.

What I Read This Morning

This morning, I woke with yesterday’s story in my mind. I am writing all this week, and Kevin is looking after the kids (they are headed on bicycles to their first summer swim lesson this morning–and the sun is shining).
I did not mean to start my writing morning by reading a long essay by a writer who has lost her cat; but if you have time, consider reading it, too (link above: “Lost Cat,” by Mary Gaitskill). It is about much more than losing a cat, of course. It is about how humans attempt to love and to change each other, out of love, or out of what we interpret as being love; and about how we are haunted by our childhoods; how our patterns establish themselves and persist; and about so many other small and moving things: the difference between sentimental and sentiment, and where our real feelings intersect with the feelings we use to hide from ourselves our real feelings.
In a paragraph that made me laugh out loud, the author begins to ask random people, strangers, even, whether they have a psychic feeling about where her lost cat might be, and she writes: “I am still amazed by how many of them claimed they did.” Which made me wonder, would I claim to have psychic feelings about a stranger’s lost cat, if asked? I probably would. I would probably appreciate being asked, and entirely believe that my feelings on the subject were as legitimate as anyone else’s. Wouldn’t you?
Well, anyway. The essay is not primarily about the cat, but about other relationships, of the human variety. I won’t give it away. The pleasure of this essay–like the pleasure of so many experiences–is letting it unfold without guessing in advance what it will reveal. (Don’t get me started on those movie trailers that spoil a good movie by revealing all the best lines).
Now I shall hang laundry in the sunshine, and mull the effect of this essay, and its effect on the story I am writing.
And then, I shall write. 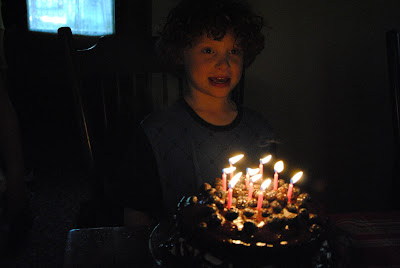 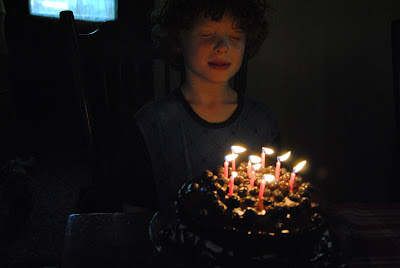 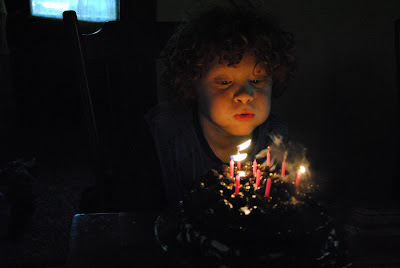 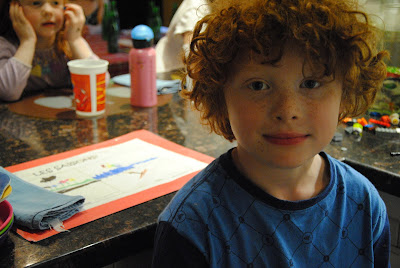 … I came to my senses and went with the whipped cream AND the chocolate sauce. And tomorrow he’ll be nine for real.

If you haven’t seen Bill Murray reading poems to the construction crew who built Poetry House in New York City, please do. I love seeing poetry presented in unexpected ways. Removed from predictable confines, art takes on meaning, and unexpected emotion: the wonders of YouTube.

“What the Living Do”

“What the Living Do,” by Marie Howe. Have you read this poem? I hadn’t. Thanks to Pickle Me This for posting the link. I don’t know why, but sitting here this afternoon, struggling with sick kids and boredom (mine, as much as anyone’s), it landed in my lap like a beautiful, unexpected gift.