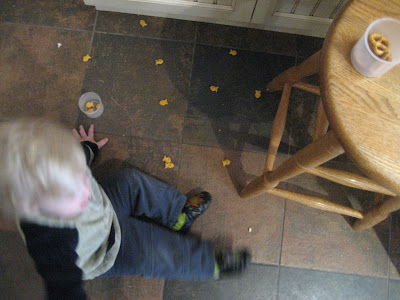 I have not been a good blogger this week and there’s a reason. The reason is that I have started writing a parenting column twice a week for a new website that will launch in December. I’ll invite you there, when it goes live. Meantime, though there’s no direct poaching of subject matter (well, not in the columns I worked on this week), there is a general overlap between the genres. The columns are polished, obviously, and much more topically focused. But are blog-like in that I’m talking about real things that are really happening.

But I need to continue this blog, and push to find a few minutes here and there (like right now–while CJ “washes” every plastic dish in the house in our kitchen sink while standing precariously under-supervised upon a stool with a revolving seat while juggling lit matches … um, just kidding about that last thing. Please stay calm. And, yes, aren’t I eminently qualified to write a Parenting Column? I find myself muttering that on occasion since landing the gig. Hey, this is a great Parenting Column moment. Parenting Expert over here! Please, nobody look!).

Because I haven’t blogged most of the week, I’ve got an overload of topics on the brain. Such as, how has this return-to-school experiment gone? I’ll tell you. I’m not a student anymore. It’s not part of my identity. It would suck to go back to school for real. It would take some humbling. And a genuine desire to acquire the skills contained within the degree–and to get to the end. That’s the only reason I’d go back. If it felt imperative. I’ve enjoyed stretching my brain, and it’s awfully pleasant to spend a couple of hours away from home every Thursday evening, but, hey, I could accomplish that by going for a walk with a girlfriend, and get some exercise to boot. Also, though he hasn’t explicitly expressed this, I’m pretty sure Kevin is terrified that I might go back to school. This experiment (ONE CLASS THIS TERM!) has proven how hard it would be on the whole family to launch this mother into a new career. It would be a full-family project, and I wouldn’t be the only one making sacrifices. Interesting. Trot over to my Moms Are Feminists Too blog which is where I really should be venting about this subject and discovering creative solutions.

If only I weren’t so tired. Topic four. So Tired. I felt so tired this afternoon it was like being extremely hungry, except insert sleep for hunger. And CJ declined to nap. This took me way back, when, after a night spent up with two kids under two, I’d be so exhausted by mid-morning that I’d try for a brief nap on the living-room floor with Apple-Apple crawling on my head and Albus pulling open my eyelids. Good times.

Well. I have managed to rouse myself in order to cook up a delicious-smelling hamburger curry which simmers on the stove behind me now while light-as-air rice is steaming inside a clay pot in the oven while CJ tries out surfing in a giant wok on the kitchen floor (having safely descended). Some of the things mentioned in the last over-long sentence feel like achievements. Actually, they all do, even the surfing undersupervised (and entirely content) toddler. No one’s going to grade me on these accomplishments, or, likely, even say thanks, but nevertheless … the best moment yesterday was walking onto campus and remembering the warmth of the scene I’d left behind: bean/sausage/endive soup and fresh-baked bread upon the table, which one of the children had set without (major) complaint, my family sitting down to eat. (Though apparently both soup and bread struck out with the two youngest, who dined on cereal instead). Nevertheless. It’s a scene that takes constant vigilance and effort to conjure, day after day; my life. Ours. 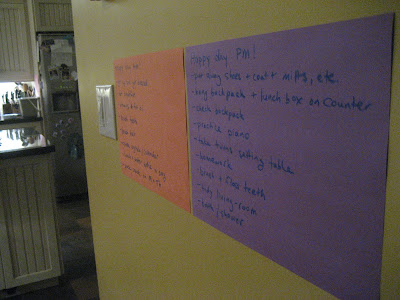 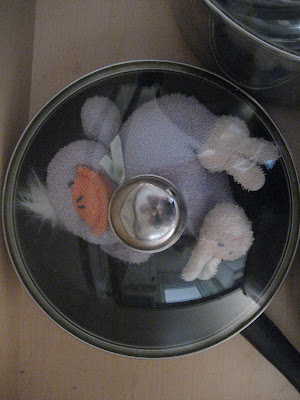 What a mess this house is. What a crumb-cluttered, toy-tossed, almost indescribable state of yuck. Here’s a stuffed duck I found inside a pot inside a drawer. Duck soup. We suffered complete pandemonium after tonight’s supper, for which there was no explanation. Both parents were too tired to rise from the table to staunch the inevitable tragedy-in-waiting. (Nothing too terrible happened). But, crikey, it was loud. You could have called it downright chaos. Anarchy.
After dish-washing, and lunch-packing, I corralled the older two children into helping me plan out new morning and evening responsibilities. Actually, there’s nothing new about any of these, it’s just new that we’re writing it up and posting it on the wall under the saleable titles of: Happy Day AM!, and Happy Day PM! (Chores, duties, and other words of that ilk did not feel quite so inspiring. Hopefully this is not a case of Orwellian double-speak). Thanks to both Janis and Marnie for their helpful suggestions on organizing and motivating feet-dragging children. We’ll see how this works, and for how long …
::::
In other news, I’m discovering mixed emotions about my women’s studies zine/blog project (read the previous post if this is the first you’re hearing about it), though perhaps should not be taking its temperature minute-by-minute (curse you, internet, curse you!). Talk about a consciousness-raising project (sadly, it may only be raising my own …). But I spent part of last night surfing for blogs by feminist mothers, and found … so much anger and bitterness. Destruction rather than construction. I wonder whether this is the feminist that other women don’t want to define themselves as, and whether the word now means something other than what it once did. And maybe I’m a complete naif for never noticing that. I’ve always rather blithely defined myself as a feminist, without bothering to explain: oh, but not that kind of feminist. But I guess I’m not that kind of feminist, really. I’m not a natural activist, that’s for certain. I have an abhorrence toward violence of any kind, and rage causes me deep discomfort. I do recognize there are situations in which rage might be the only response. But I still don’t like it. I don’t like feeling angry myself or assigning blame. I’m wondering … can change happen … gracefully, gently, slowly? Can it be brought about by people asking: how can I make this better? What does better look like? How can I help?
:::
Please go and read the responses to the questionnaire that are coming in. I’ve posted them here. They’re lovely and thought-provoking, and I thank everyone who’s taken time to reply. You’ve got me thinking, too.

Moms Are Feminists Too 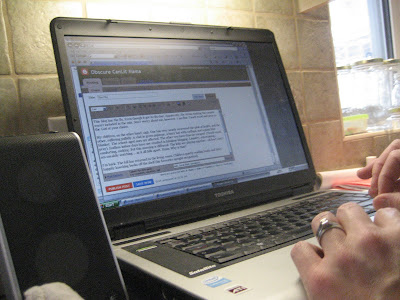 Hi readers. Could I ask a favour, please? I’m working on a zine project for my women’s studies class, and have launched a blog to complement it. Both relate to a recent post on how the personal feels political. The blog is called Moms Are Feminists Too. If you are a feminist and a mother, or even a mother who’s thought a bit about feminism, would you consider visiting and responding to my opening questionnaire? It focuses on motherhood, identity, work, and feminism.
I haven’t got any brilliant ideas, yet, for change, but basically want to create a forum to discuss how we can make this job of mothering more valued in our culture. Think of these two extreme characterizations of stay-home mothers: yummy mummies and welfare moms. Think of the negative baggage both of those images carry: on the one hand, we have the self-indugent hyper-privileged moms, and on the other, the lazy, uneducated moms. It’s mean. And it’s prevalent. (Can you think of a different prevailing characterization for motherhood today? If so, I want to know! My fuzzy-mummy brain can’t conjure any up …). (And, yes, I wrote that last sentence on purpose). Stay-at-home dads face similar problems, which makes me think the underlying issue is a general cultural disdain for childcare and children.
Because this is a school-related project, I can’t promise it will have legs past the assignment’s due date. But then again, maybe it will. Thanks in advance for your help and input!
:::
Note: you don’t have agree with everything / anything I’m saying to add your voice to the mix.