Give what you want most 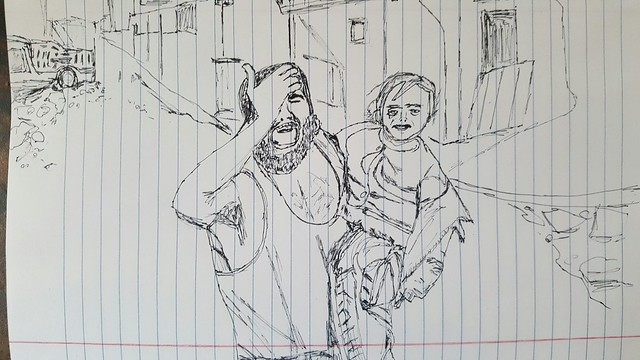 To tell the truth, I don’t have a lot to say this morning. Yesterday, I came across a photo in the newspaper and felt like I had to respond to it. Because I can now draw, I drew it. I don’t even know how I would write about it. What are the limits of my imagination? The limits of my knowledge are vast. I don’t know the details of what is being shown, except that this photo was taken in Mosul, Iraq. All that seems certain is that these are two people, human beings, a father and his daughter, caught up in the horror of war, which is a man-made horror. “What is happening?” my youngest asked, when he saw this picture. “Their house has been bombed,” I said. “Who bombed them?” But I don’t even know that. According to the caption on the original photo, they live in Islamic State territory, so maybe they’re being bombed by whoever is fighting against Islamic State. Where is evil, in this picture? Where is the enemy? Why is it so easy to destroy, to reduce a building to rubble, to displace lives?

And the question I am most afraid to ask: How is our safety and security linked to this picture?

Propped on my desk right now is a little card on which I’ve written out the Ten Tenets of the City of Joy (I read the Ten Tenets in a newsletter from the Stephen Lewis Foundation, a charity I support). The City of Joy is a residence in the Democratic Republic of Congo that serves women who are survivors of sexual violence (rape is used as a weapon of war in a many conflicts, including in the DRC). You can read more about the City of Joy here. 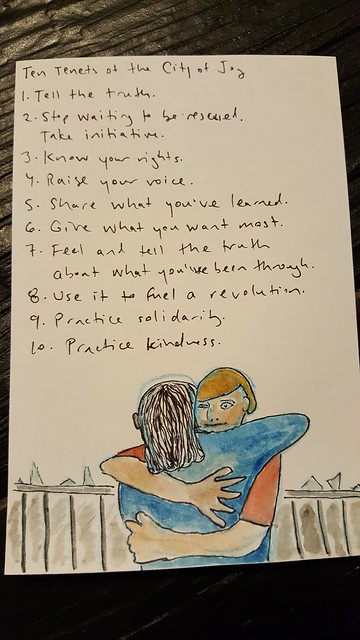 The Ten Tenets give me something concrete to hold on to when I am feeling despair. Right now, I’m drawn to # 6: Give what you want most. And # 10: Practice kindness. But let me push this reflection further — I am not a victim of violence or a survivor of war. I am, in many ways, the beneficiary of the misery of others; the systems that work for me create disadvantage and disaster for others. And I don’t know how to change that. What would I be willing to sacrifice? I’d like to add one more tenet for myself. # 11: Listen.