In Vancouver, day of surreal 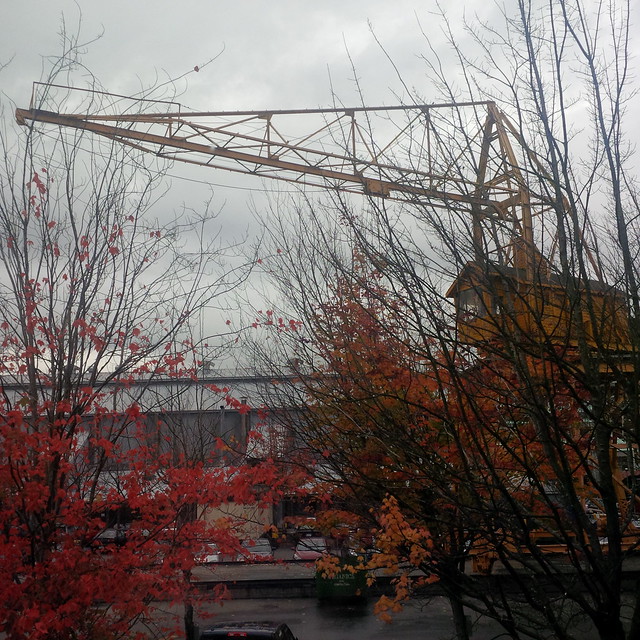 The Weather Network tells me it’s 14 degrees, feels like 13, with 20-30 mm of rain expected to begin at 5:50PM, which coincidentally is around the time I’ll be taxiing to tonight’s event, a fundraiser at Vancouver House with Joseph Boyden.

Today may go down in my memory as one of the more surreal; if, that is, I can remember any of it. I’ve been having trouble sleeping on this trip. It was well after 1AM when my body finally shut down, and my alarm went off at 4:15AM. I roused myself, finished stuffing things into my bag (didn’t think it was all going to fit for a moment there), and caught a shuttle from the Banff Centre to the Calgary airport. It was too dark to say a proper goodbye to the mountains.

I slept on the shuttle, like someone who had been drugged rather than like a normal dozing human being. Off the shuttle, I felt delusional from exhaustion, wandering the airport, trying to behave like a responsible adult who understood self-check-in machines and how to attach luggage stickers and where to stand in line. I was randomly selected for the full-body pat-down, which, frankly, bothered me not at all. On the plane I slept that drugged sleep again, surfacing to see on the TV screen in the seat-back next to mine, live footage from Ottawa, where shots had been fired inside the Parliament buildings. A reservist killed at the war memorial for the unknown soldier. A gunman killed too. Baffled Canadians taking cellphone footage. Streets shut down.

There is nothing to be said about this that I feel qualified to say.

I can’t really connect with my emotions on the subject. It sounds trite to express sadness. But I am sad.

When we landed in Vancouver, I realized it was only 9AM here. The hotel generously found me a room. I slept the drugged sleep, roused myself, ate a burger for lunch and watched soccer in a sports bar. I texted with my family while eating, which made me feel less lonely. And then I went for a run on the seawall. Running is hard, it’s always hard, but it works. I feel better.

Kevin is sending me texts and photos from home: right now, my kids are playing music together in our living-room. My brother Karl is recording them. CJ is singing into a mic. The girls are playing ukuleles. And Albus is tapping out chords on the piano. It’s like my dream family come to life. Only I wish I were there to see it.

But I have seen Karl Ove Knausgaard–twice. First when checking in, and then when getting off the elevator in my running gear. Neither time did I fangirl him. It took some restraint.

I need a short nap before putting my Little Black Dress and heading out to a party. Nothing about this day feels concrete, feels like I can dig my fingers into it and find the pulse. I’m oddly removed. I was running on the seawall an hour ago. I flew over the mountains this morning. I’m here now. I’m here, now.

PS This is the photo Kevin sent me of the kids, playing music together. Sorry. It’s very very tiny. It seems fitting: this is as close as I can get. Home feels far away, right now.

In Banff, with mountains
In Vancouver, afloat