In Banff, with mountains 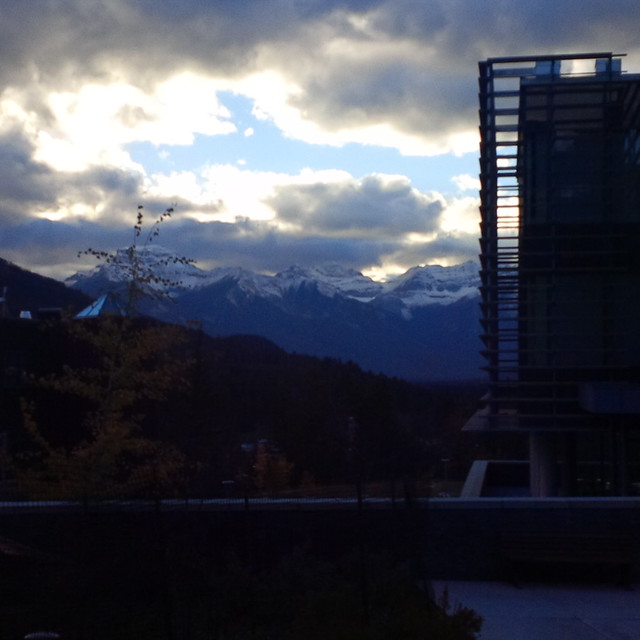 The Weather Networks says it’s 17, feels like 16, which could also be described as “perfect.” I’ve been here since Saturday, late afternoon. I probably should have mentioned it sooner. But I’ve been stunned into silence by the mountains. There are mountains everywhere. It would be no exaggeration to claim that the first evening I was here, I was pulling out my phone to take photos of mountains every few steps.

It was like, hey, wow, holy crap that’s an awesome mountain right there! 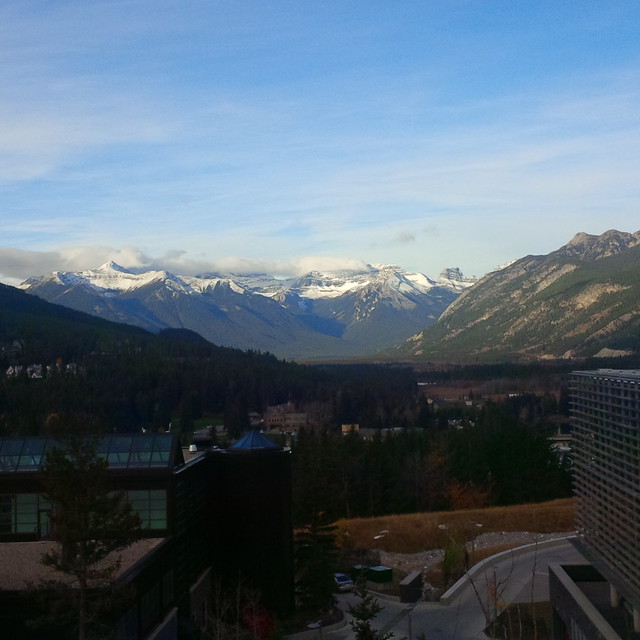 Turn head an inch and begin walking. Stop. Holy crap, another freaking mountain! Like, right there! 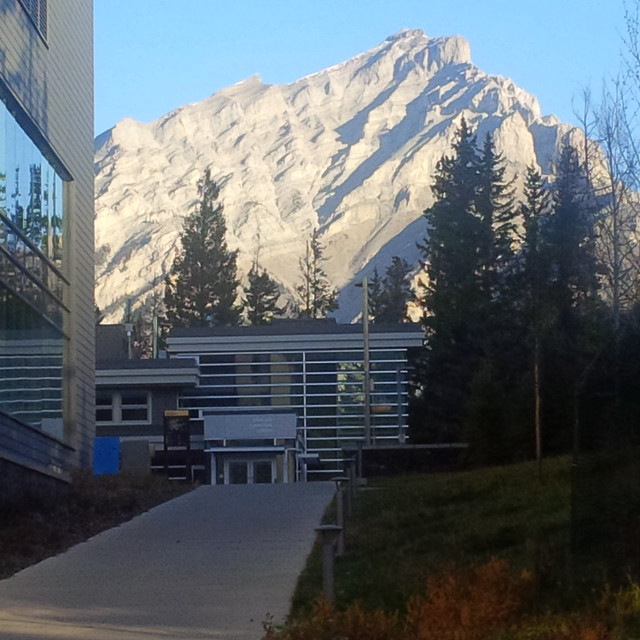 I mean, seriously! Look at that mountain!

When it seemed my husband had received enough mountain photos, I widened my range of recipients. If you haven’t gotten one yet, don’t worry, it’s on its way. 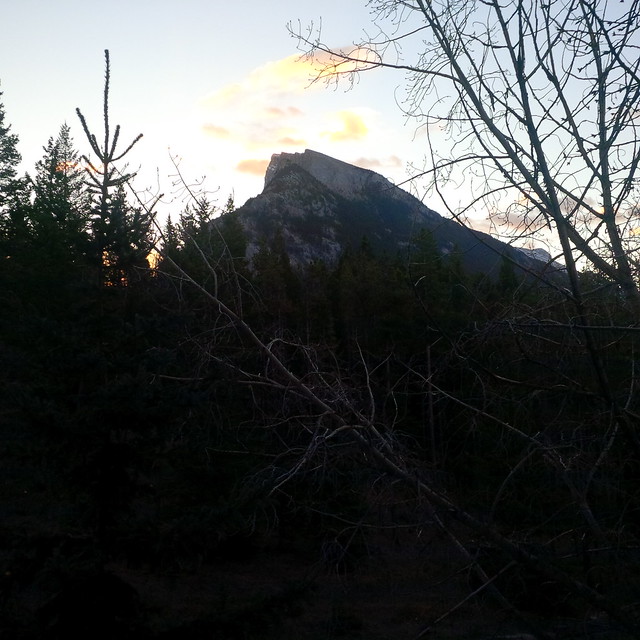 For example, I texted the mountain that’s out my bedroom window to my 13-year-old. Let me rephrase that. I texted a mere photo of said mountain, not mountain itself.

“You should climb that, Mom,” he texts back.

It’s steeper than you think, I reply.

I mean, it’s sheer bloody rock, so far as I can tell. And I have a wobbly kneed fear of heights issue. I also read, with over-much attention and avidity, the section in my Banff Centre guide, provided for me in my room, on local wildlife. It’s a long section with many useful details that set my imagination into overdrive. Walking between buildings after dark, I find myself on the lookout for cougars. I know it’s irrational. But cougars. Mountain lions. What’s not to fear? I’ve noted, too, the signs posted around campus reminding us to keep “three bus lengths” between ourselves and any elk we might see. “Do not approach.” “Was not planning to, thanks.” Apparently there was a grizzly on the other side of Tunnel Mountain, blocking the path today. A grizzly. Tunnel Mountain? The one recommended as a nice stroll with a great view at the top? I might have to pass. Who knew I was such a wimp? Well, now we all do.

The thing is, I don’t need to trespass on Grizzly land to get a great view. Let me text you a photo of the great view I get just by turning my head. 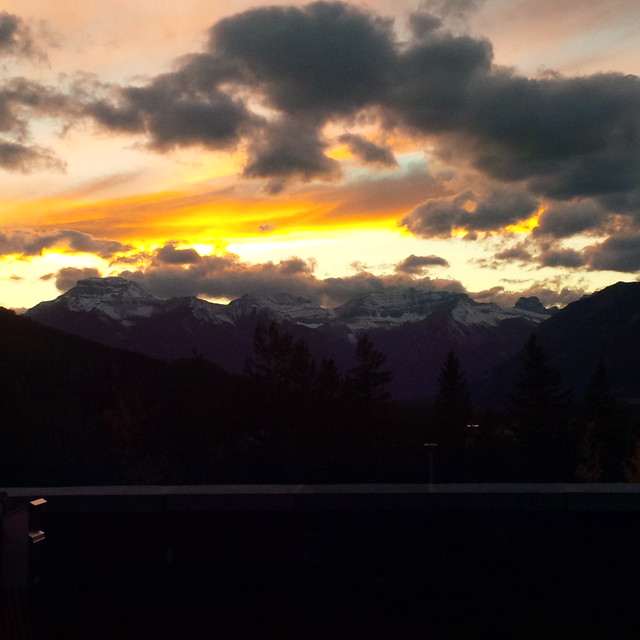 In fact, it’s a bit unnerving, all the great views. I ate lunch with the writer Kim Thuy today, and she was saying there’s such as thing as suffering from too much beauty, and your head explodes; metaphorically, I presume. I tried looking up the syndrome back in my room. The search led me to a Tumblr site called “Too Much Beauty,” which mainly featured young male actors I didn’t recognize because I’m not a young female teenager. So that seems a dead end.

I wonder, could there be such a thing? Could one suffer from too much beauty, staggered by the immensity, the vast non-human scale of these complex rock creations towering over us, former seabeds embedded with ancient tropical coral reefs? How to write anything of consequence while looking at something so old, so immense, so austerely implacably beautiful?

I am therefore typing this in my room, facing a blank wall. It’s peaceful. I’m working well in here. I’m sipping a healthful beet/carrot/ginger concoction that I pray will dislodge my nasty cough so I can sleep through the night, once again. Truth be told, the free drinks, which seem to abound wherever writers crop up, have not been helping, either with the cough or the sleep.

But the beauty. It’s out there, waiting for me, whenever I’m ready to face it.

P.S. Never take a selfie with a mountain. There is no point. Mountain wins. 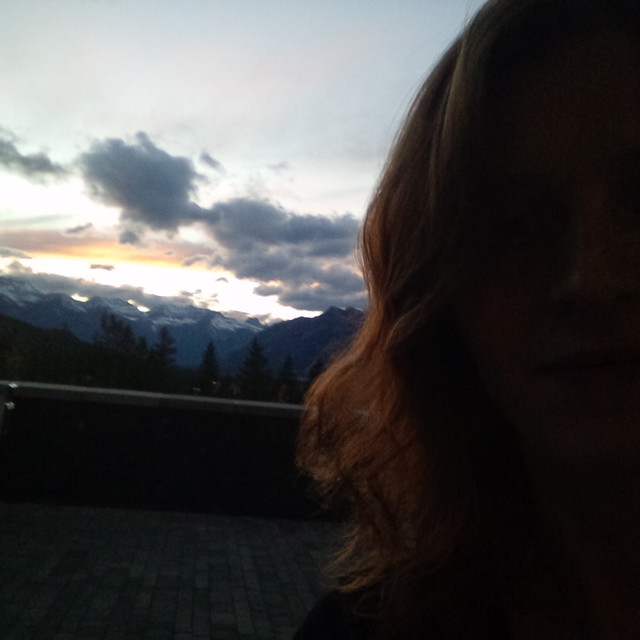