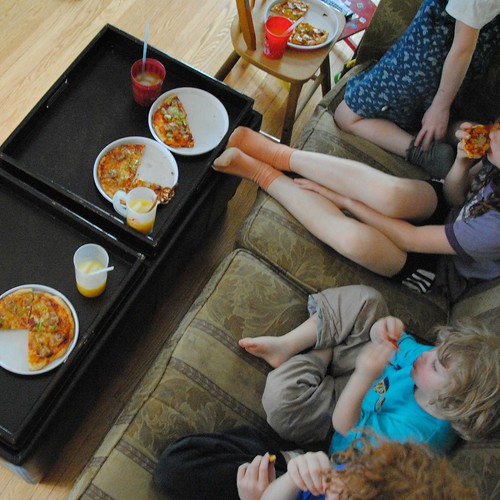 My thoughts are all over the place on this Monday morning. I’m wondering: should I blog our week in suppers? Skip over that and write about my weekend of solo parenting? Share news about upcoming events and unexpected Juliet feedback?

Last night, I set my alarm for swimming. I woke at 2am. I’d been dreaming about sleeping (again!). I decided to turn off the alarm and really sleep. I have three early mornings planned this week; given that I also have two evening readings, self-preservation starts to come into play. It was a little easier to turn off the alarm given that yesterday, late afternoon, I ran 12 pain-free kilometres, keeping up a good pace and plotting my return to distance running. That counts as my first real distance run since my injury in January. It’s short, as far as distance runs go, but it was a blast. Next week … 14 km??

Uh. Where was I? Oh yes, self-preserving.

Tonight, I’m ferrying children from dance to soccer practice while Kevin has an early soccer game. Tomorrow, I’m at the Starlight in Waterloo (come, too!), from 7pm onward. Readings start at 7:45. And on Wednesday I’m headed to Toronto for an event at Type Books called the “Short Story Shindig” with Heather Birrell and Daniel Griffin, and hosted by Kerry Clare; 7pm (come, too!). This is all very exciting, but doesn’t go terrifically well with excessive early morning exercise.

As I said to Kevin this morning, “This isn’t the year of the triathlon. This is the year of The Juliet Stories.” (Which may be the first time I’ve admitted that, even to myself. I really really liked the year of the triathlon. I felt so hard-core. Sharing my book feels less focused, less goal-oriented. Maybe I need to start thinking of readings as races. They definitely affect me in similar ways — I’m nervous before, wired and happy during, and it takes me a little while to come down afterward.)

Now. Let me tell you all about my weekend with my kids. We had so much fun! Why can’t we have this much fun all the time? Is it because I’m usually trying to get too many other things accomplished? That can’t be entirely it, because we seemed to accomplish quite a lot, even while finding time to relax. Our weekend included …

:: watching Modern Family on Friday night while sharing an entire bag of Cheetos (which were utterly disgusting, may I just add)

:: a bike trip to the grocery store for picnic and party supplies, followed by a picnic in the park

:: reading outside while two girls rode giggling past me on scooters and bikes too small for them 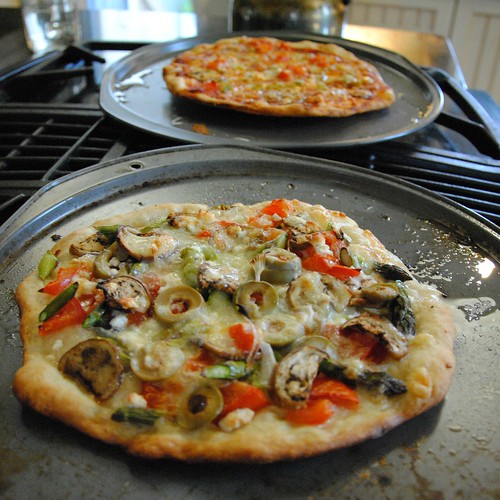 personal pizzas for party night (the one with the olives, asparagus, and eggplant? yes, that’s mine)

:: “Party Night,” wherein we had homemade personal pizzas and punch with ginger ale while watching a movie, then gorged on episodes of Modern Family while simultaneously gorging on boxed cereal and utterly disgusting candy; the rules for Party Night go like this: everyone gets to choose one treat from the grocery store (under $4), and we stay up as late as we want; oddly, three of four children chose boxed cereal (Corn Pops, Frosted Flakes, and Froot Loops, for the record). We have never felt so collectively gross. I blame the milk. Maybe the sugar too. It was surprisingly easy to herd the children off to bed at a not entirely unreasonable hour (9:30ish) …

:: … though AppleApple and I got distracted searching for my old Grade One piano book in the basement, which we never found, but we did find one of my old and relatively simple classical piano books, and ended up staying up for another hour playing songs. The Wild Horseman. The Happy Farmer. One of Muzio Clemente’s simple Sonatinas (she’s learning it!). Minuets from the Anna Magdalena Bach notebook). Bliss!

::  making and delivering, on bicycle, invitations for an 11th birthday party (a week from today!)

:: more bike riding and trampolining and laundry hanging; hey, whatever makes us happy

Mother’s day was capped off by the return of Dad, and supper out at all-you-can-eat sushi with my mom, too.

And that is plenty for one blog post. Never got to the unexpected and lovely Juliet feedback. Well. More tomorrow.

On gift-giving
The morning is fleeing!