The week in suppers: mid-March, sigh 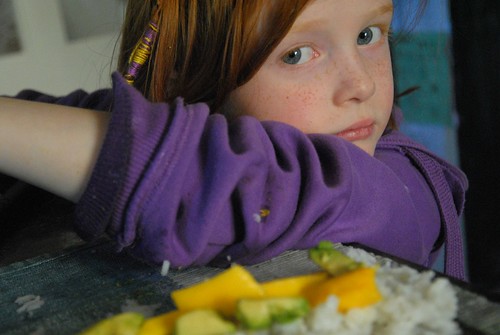 **Monday’s menu** French onion soup over stale baguette slices, with melted cheese.
**Inspiration** This meal was inspired by a stale baguette. However, we had a soup shortage; underestimated appetites. Apparently it was delicious. (I ate leftovers and didn’t get a taste.)

**Tuesday’s menu** Sweet potato coconut soup. Bread. Cheese.
**A request** Realized, while the kids were preparing to leave for school, that the day was going to be insanely busy and something needed to be tossed into the crockpot. I thought lentils. The kids requested my sweet potato soup instead. I was surprised because I thought they’d be getting sick of it; but I love requests. Apparently it’s not to be called “yam” soup, even casually. Yams don’t sound as tasty as sweet potatoes.

**Wednesday’s menu** Pulled pork on buns.
**Thanks** to Grandma who babysat (and brought a crockpot of food!) while Kevin and I were in Toronto eating Chinese food before the Harbourfront reading.

**Thursday’s menu** Mashed potatoes. Mushroom gravy. Kale chips. Fried tofu.
**Plenty of time** Thursdays are the best because I have time to cook (at least with our the most recent schedule; who knows what the spring schedule will bring). That mushroom gravy is fantastic. The kids would agree with me, except for the mushrooms.

**Friday’s menu** Ethiopian lentil bowl. Baked rice.
**Leftover surprise?** Nope; there were not quite enough leftovers to anchor Friday’s meal and I didn’t want to suffer a repeat of Monday’s shortages. So I cooked up lentils with tons of garlic instead. The recipe is from Simply in Season and it’s delicious and super-easy.

**Weekend kitchen accomplishments** Four loaves of bread. Used the new bread flour, which made light and fluffy loaves; a big improvement on the rustic lumps of the last batch. 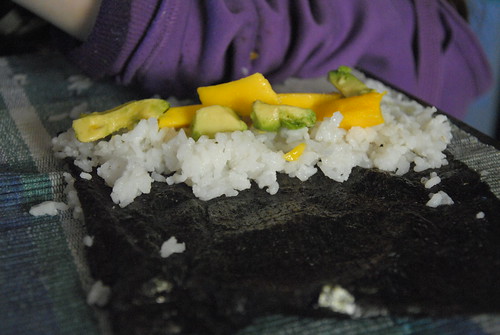 **Cooking with kids** CJ’s menu, Fooey’s assistance. Sushi, maki, and miso soup. Green tea.
**Overheard from Dad-in-charge** “You’re putting your sleeve into the roll again.” “I think you should take off that sweater.” “You’re covered in rice.” “There is rice all over the floor.” [muttered]: “This would be so much easier without help.”
**Guests** In keeping with our attempt to invite guests to dinner at least once a week, we invited three to share in our sushi meal. Together, we devoured 3.5 pounds of sushi-grade salmon, plus rolls made with mango, avocado, and cucumber.