Friends, I Signed the Contract … and other news 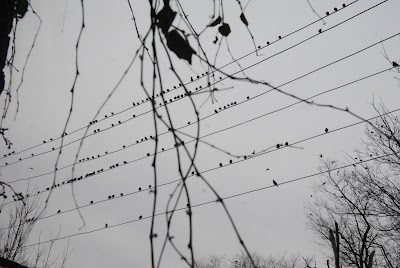 I wonder what picture I create–of my life, and of my character–here in Blogland, and whether it relates, even somewhat accurately, to reality. I don’t mean that I deliberately attempt to misrepresent myself, only that I often blog about best intentions, questions, hopes and plans, and forget to follow up with the hey-here’s-what-happened-with-that post.

So here’s what happened with a few things …
1. Kids playing outside, alone.
The most wonderful thing happened this weekend: two boys from Albus’s grade, twins who live up the street, spontaneously appeared on our front porch, dressed in winter garb and throwing snowballs, to invite Albus to play with them! Seriously! No parents were involved (though we did give Albus permission to go). Off the three of them went, tumbling like puppy dogs, to have a snowball fight. And the twins came back again yesterday, and Albus spent about three hours playing outside with them, all over the neighbourhood, all on their own. I am thrilled. And I had not a moment’s pang about his independence and freedom to wander. I think this has to do with several factors: he’s old enough, and he’s not alone, but with friends.
2. The book. The publisher.
Okay, I’ve been wanting to make a formal announcement for awhile, but the truth is that no moment ever feels quite momentous enough, and in any case the good news has leaked out in dribs and drabs and you probably already know what I’m going to say. But just in case … I signed a contract with a publisher! The publisher is the wonderful, independent, Canadian House of Anansi Press. (Please visit them, and pick up some of their books for Christmas gifts, which you can get directly from them for 30% off. Yes, I am shilling on their behalf; but only because I think the books are that good. Offhand, for grownups, I would recommend: Far to Go, by Alison Pick; Annabel, by Kathleen Winter; February, by Lisa Moore. Their children’s imprint is Groundwood, which publishes the Sam and Stella books, by Marie-Louise Gay, and the classic Zoom, by Tim Wynne-Jones, illustrated by Eric Beddows. Good, good, good.)

The tentative pub date may sound like a long way off to anyone not involved in writing and publishing books, but sounds plenty soon to me: Fall, 2012.

I’ve been working with Anansi’s editor, Melanie Little, for several months now, and if you spot me mumbling to myself on the walk to school, or looking particularly grumpy/lost/absent, please be kind. The transition between writing time and mama-time is not always smooth, especially if I’ve had to leave a story unfinished (which is most days). Don’t take offense, run in the opposite direction, or report me to the authorities, please. Really, I want you to approach and talk to me. Throw me a lifejacket. Pull me out.
I am thankful for yoga, which gives me time to empty my mind so that it can be filled anew. I am thankful for a recent writing week, which yielded another story and a half, and solid new ideas to boot. I am thankful to Kevin for doing more dishes and cooking more suppers than he did even a few months ago. I am thankful for an excellent nursery school, public school, and babysitter. And I am most thankful to have a publisher’s support backing this work. I won’t say it’s erased all anxieties or doubts, but it’s a true gift to know others are out there, rooting for this book, and doing their best to make it all that it can be.
3. Green dreams. Confessions.
People, I am dreaming green and living grey. I drive my kids to swim lessons (yes, it is walking distance). On a rotten weather day last week, I drove to pick up the kids from school. I had no excuse except convenience and comfort. And I keep using the drier! (There continue to be lice outbreaks at school, but still …). Last Wednesday, while Albus was at piano lessons, I lost my mind at the grocery store (at least I’d walked there), and in a sleep-deprived haze grabbed off the shelves several boxes of snacks and treats. Packaged up in plastic and cardboard. With ingredients I can’t pronounce. Better versions of which I could have made at home. There. I won’t go on. Just know that my intentions are good, but they are not good enough.
4. Is there anything else?
Probably. But that’s all for now. I am inches from finishing a Really Good Story. I’ll let you know how it turns out … or will I?
The Unsupervised Child, Outside
The Car