The Unsupervised Child, Outside 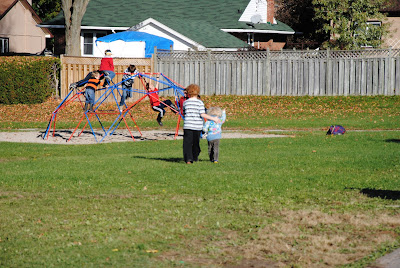 A couple of nights ago, I read a bedtime story to Fooey: Danny and the Dinosaur. It’s a book many decades old, in which a boy befriends a dinosaur, and they spend the day wandering around Danny’s city, eating ice cream, and playing with Danny’s friends. When we got to the end, and Danny said goodbye to the dinosaur, and they parted and went their separate ways, Fooey looked at me with puzzlement. She couldn’t understand: Why were the children outside all by themselves? Where were their parents?

That question has haunted me ever since. Fooey does not see children outside in our neighbourhood all by themselves. It is so foreign to her that it leaps out as an aberration when she sees the idea illustrated. Of course, she is only five, perhaps too young to run around the neighbourhood without parental oversight. Perhaps; but perhaps not. I remember playing outside at the age of four or five with my brother (younger) and a friend (my age), by ourselves, unsupervised. We were given the freedom, and trust, to walk from our house to his, to cross backyards, to play in our unfenced yard and garage while my mother made supper, or put the baby for a nap, and checked us occasionally from the window. When I was not much older–seven, eight, nine–I played freely outside in my neighbourhood. I don’t remember having to check in regularly with my mother, or any other mother, nor do I recall being “street-proofed” in any way. We explored beyond our own yards, we crossed quiet streets, played on the college campus nearby, went sledding in winter, had imaginary adventures in the small woodlots on campus, and dipped our toes in the creek. By ourselves. No parents. Hours spent on our own.

My children don’t get to do that. (They play unsupervised in our fenced yard; and they walk to school with friends; but these are activities with obvious boundaries and safety features built in). My eldest is nine. We don’t live in a small town, and we do live on a busy street, but there is a little park nearby, and the neighbourhood is full of other kids … few of whom I’ve ever seen walking alone, let alone just going out to wander around and play. Something about the lack of kids out and about makes sending my own kids out and about feel much less safe. If the little park were frequented by neighbourhood kids, on their own, if the sidewalks were full of kids roller skating and scootering and building snow forts, without parental involvement, if it were the habit of kids to wander around the corner to knock on friends’ doors to see whether someone was home and could come out and play … how different would this neighbourhood look and feel?

What are my kids missing out on? What should I be doing differently, as a parent? Why am I so afraid to let them be on their own for long stretches of time, without me knowing exactly where they are or what they’re doing? (I know what I’m afraid of–terrified of losing one of my children–but I don’t know why I am so afraid. Is the fear irrational? Is my control over my kids’ activities hindering their development as autonomous individuals?).

Dear Diary,
Friends, I Signed the Contract ... and other news