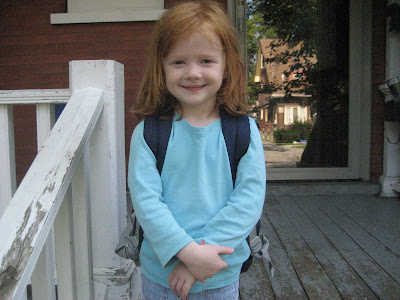 “This is my first day of school in my whole life!”
She has, in fact, been dragged back and forth to school since she was five weeks old, but finally finally her own time has come. This morning, she met her teacher and explored her classroom. She looked confident and prepared, identified the “F” in her name (afterward she confided rather dismissively, “That was easy!”), and she and her little brother played together contentedly while the proud parents discussed the ins and outs of full-day kindergarten with her teacher. (I love how in kindergarten the grownups are required to squat on teeny-tiny chairs around teeny-tiny tables). She will attend her first full day on Monday. Her inside shoes are already there, waiting for her in her shoe cubby (there is also a bin with her name on it, a hook for coat and backpack, and a lunchbox cubby; all labelled and waiting to welcome her).
:::
Yesterday we tried out racing from school to piano lessons to City Cafe Bakery for take-out pizza to home again, all the while thinking: next week we’ll add choir in, too, after supper. Well, maybe not. Choir might just have to take one for the team, because the kids were in states of fine fury and exhaustion by 6pm. Albus kept stalking around glaring at everyone and saying, “I’m so angry!” “Why are you so angry?” “Because you’re not … because Fooey is … because !!!! roar!” Clearly, he was in the frame of mind that in adulthood calls for swear words mumbled under breath, or a nice restorative after-dinner beverage on the porch. We figured he was angry because he was exhausted beyond all repair, and we let the children veg after supper with a movie, then brush teeth, and fall into bed. But Apple-Apple in particular was too wired to relax, and had fits in her bunk, insisting that she must read herself off to sleep. This argument proved particularly effective on her mother, who feels exactly the same way most nights.
:::
Want to make note somewhere (baby book not available): CJ is speaking words! Putting them together in twos! “Dada ball,” he told me last night, coming inside after kicking a soccer ball around the back yard with his dad. Seriously, he did! He also announced, clear as a bell, and at exactly the right moment: “Nap.” Yup, it was naptime. What was that you say? Naptime. Oh, “naptime, naptime!” “Didi” continues to stand in for animals of all kinds. If he’s not kissing his favourite “didis” (animal crackers included), he’s having them kiss each other, or demanding we kiss them. And he’s got a great big head nod he uses to indicate “yes.” I like when a kid says yes rather than no. Shows a positive outlook in life, doesn’t it?