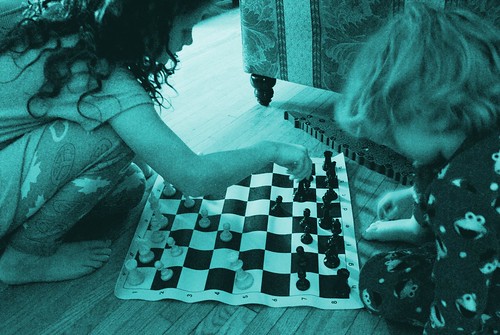 My favourite free photo editing software (Picnik) has just gone offline forever. So I’m trying out Gimp. All I can say so far is: too many options! 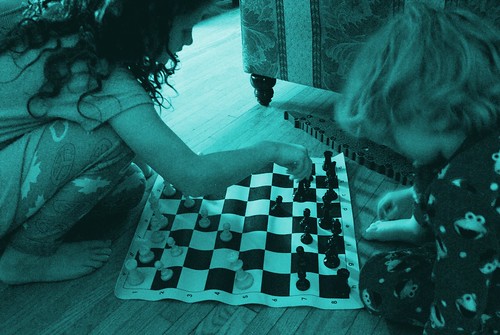 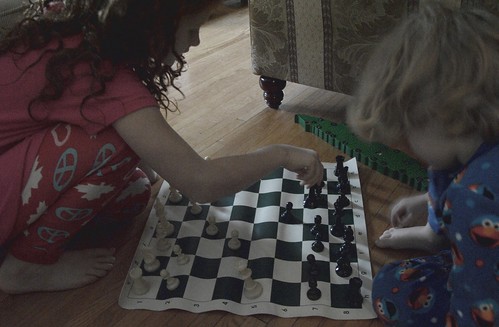 Spot the differences? I like the top one best. I think.

Photography has the ability to steal big chunks of my time. I can’t decide if I mind; is it stealing time I could be using more productively? But I so enjoy doing it. A friend who’s a photographer has pitched me on participating in a photo project I’m pretty excited about. (If this goes ahead, it will be the third photographer I’ve modelled/mused for in less than a year; new side career?) He also asked whether I ever print my photos. The answer is, embarrassingly, no. I print our family photos in one large batch, once a year, and stuff them into albums. But my experimental photos have never been printed. Not one. Maybe because I imagine them needing to be printed large, or printed on an unusual material, or printed as part of a larger project that I haven’t wrapped my mind around (and quite possibly never will). Maybe because printing would seem too close to commitment, to being a final step in a process I’m not sure I’m close to figuring out. Maybe also because it would be an expensive experiment for an amateur. Maybe someday.

Maybe I’ll always have a few too many pots on the stove.

And on that note, she departs to go outside and take more photos in the lovely afternoon light. 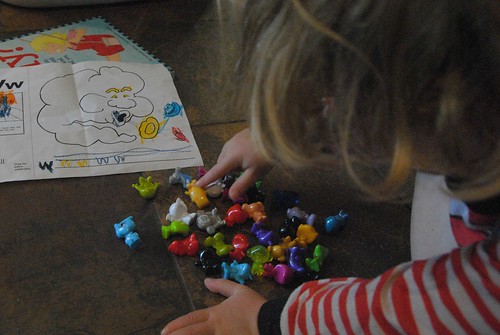 While I’ve been holed up in the writing cave, my youngest has apparently learned how to write. On the back of this worksheet, which he coloured and filled out himself (you can see his Ws), he signed his name. Just because. Did I know he could sign his name? I did not. At least, not in clear easy-to-read lettering. He was a bit embarrassed by my praise. So he got to work dumping go-gos on the floor (those brightly coloured plastic figures you can see in the photo). Then he separated them into two piles, and counted them. Up to 27. Correctly. After which he separated and organized them by colour.

“I think your little brother is prettty smart,” I said to Fooey, who glanced at me in puzzlement. “Of course he is,” she said. 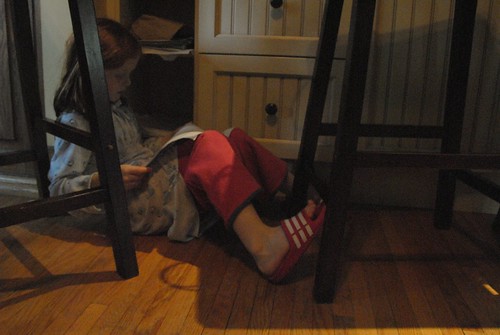 Meantime, she was holed up under the counter — reading.

Writing week. Can I sum it up? I cannot, not with precision. It’s been worthwhile, but not in the ways anticipated. I’m too superstitious (or realistic) to write in detail about the work done. But yes, work has been done. It’s been a good week. I’m looking forward to the next intensive, scheduled for May. 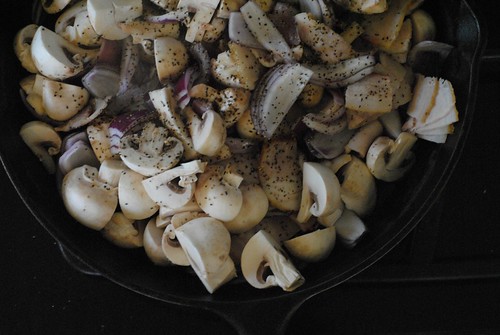 **Monday’s menu** Ham and scalloped potatoes. Salad. Corn. Fruit with whipped cream for dessert.
**Best of all** An extra Easter dinner, not cooked by me. Prepared and hosted by my dad and stepmom.

**Tuesday’s menu** Udon noodles stir-fried with tofu and veggies.
**Inspired** I’ll admit that a new product at the grocery store inspired this meal. Udon noodles! I mixed everything together and forced everyone to try it. But it was so delicious, I really got no complaints. No more than usual, that is.

**Wednesday’s menu** Baked potatoes. Broccoli. Mushrooms and onions fried with bacon. Sour cream, grated cheese, butter.
**Obstacles** Eldest son was supposed to turn on oven when he got home from school (as I was out with the others at piano lessons). This has worked without a hitch in the past. Except he called to say he was at a friend’s house instead. So the potatoes didn’t start baking until I got home. And on another note … really, if I was going to fry bacon, I should have just fried it into crumbly bits. Instead it got kind of soggy amidst the giant pan of mushrooms and onions. And the kids were not fooled and did not eat their veggies as hoped. They picked the bacon out of the mix and skipped the rest. Sigh. (One package of nitrate-free bacon was an impulse purchase from Bailey’s; clearly not vegetarian.)

**Thursday’s menu** Cranberry beans. Baked rice. Cabbage and carrot salad.
**Beans** The beans smelled delicious simmering all afternoon. But in truth, I like two kinds of beans: black (or turtle) and small red Mexican, and the cranberry beans (aka romano, I think) pale by comparison. They’re a little too fat, a little too mushy. Probably better for a soup than as a stand-alone bean atop a pile of rice. But I have a large bag to get through …

**Friday’s menu** Veggie burgers, hot dogs, and veggies on the BBQ.
**Thanks** to Kevin, who saved supper when I realized I’d planned nothing, had spent the day writing, and was about to leave for swim lessons with the kids.

**Cooking with kids** Fooey’s menu. Breakfast for dinner.
**Truth is** Kevin did all the cooking. Fooey was feeling a bit off, so we thought it best. Albus pitched in on the fried potatoes.

Things I am not doing today 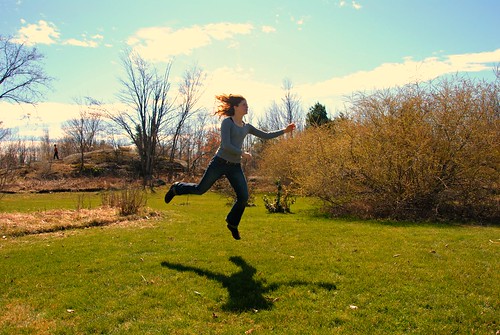 I have done no laundry.

I have cooked nothing.

I have scarcely seen my children.

I have taken no photographs, although it is Sunday, and I try to take photos on Sundays.

I have not been outside.

I have scarcely moved from this desk.

My writing week seems to be starting a day early. I seem to be writing escapist historical fiction. I am next thing to flabbergasted about this turn of events.

But I am not worrying about it. Not today.

Two things. One, if you live in the Waterloo region, look for Green magazine in the KW Record. I’ve got a piece in there about dreaming green. (It is not yet available online.) And two, let me direct you to my conversation with Marita Daschel about The Juliet Stories, photography, and motherhood, among other things.

The week in suppers: last of the cold cellar 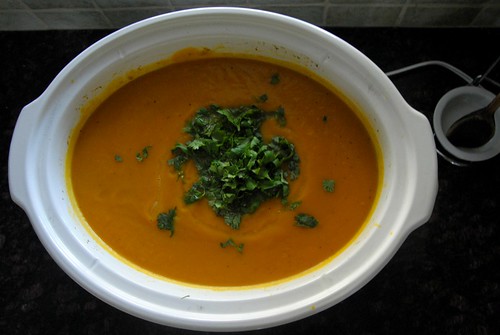 **Monday’s menu** Split-pea soup (crockpot). Baked squash. Homemade garlic bread.
**Cold cellar** Monday saw me heading to the cold cellar on a mission: use up what’s left, and quickly. The warm snap was not good for the rotting veg factor, therefore, roasted squash. I also delivered several pounds of garlic to friends this week; it had become suddenly rather redolent — not spoiled, mind you, just hinting toward The End. I’d stored too much for our family to use before time ran out. Must make note and remember this for next season’s garlic order …

**Tuesday’s menu** Sweet potato soup (crockpot). Steamed broccoli. Baguette and cheese.
**Cold cellar** Used leftover roasted squash in soup, combined with sweet potatoes. And made such an enormous batch that I froze the leftovers for another supper.

**Wednesday’s menu** CJ’s birthday party supper, one day early: Black beans, rice, fried hamburger, tamales, tortillas, tortilla chips, avocado salad, spinach salad, peppers, cilantro, green onions, various cheeses and salsas and toppings. Birthday cake/cupcakes and ice cream for dessert (of course).
**Party fare** I love serving this meal to a crowd. It can be served buffet-style, and happily feeds a variety of tastes and dietary needs — vegan, dairy-free, gluten-free, etc., etc. The other advantage to this meal is the ease with which much of it can be prepared in advance. Sure, it took the better part of my afternoon to chop, mix up dressings (with loads of garlic), etc., but I was able to serve this meal to 18 people within half an hour of getting home from the girls’ piano lessons.
**Cheating** The cake/cupcakes were out of a box. The little kids and I baked them the night before. I would not object to making party cake from scratch, but have yet to discover a simple and successful cake recipe that compares to a boxed mix. Maybe you have one?

**Friday’s menu** Church supper.
**Because** Thank you, God, we made it to Friday night. 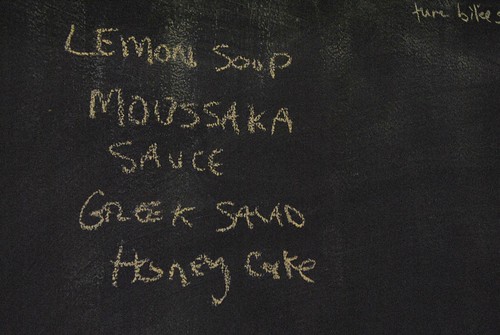 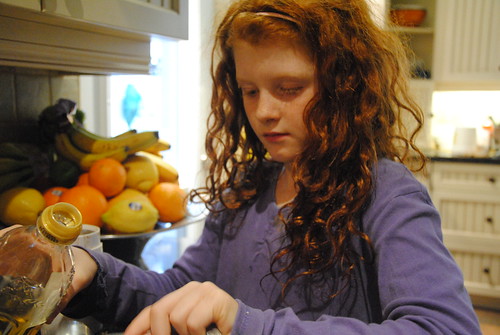 “I think they like olives and lemons in Greece.”

The week in suppers: the “hungry” month 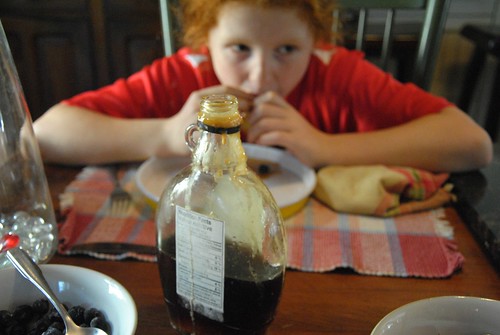 **Tuesday’s menu** Choose-your-own-adventure-noodle soup. Japanese broth. Unadulterated broth. Egg noodles. Rice noodles. Chopped scallions. Fried cabbage with carrots, tofu and ginger.
**Inspiration** Made a huge fresh pot of turkey stock. Nope, not vegetarian, but I’m a big believer in broth. So I buy bones and make stock and freeze it for soups and such.
**Cabbage** There were complaints over the cabbage/carrot stir-fry again. Thing is, we’ve got a lot of cabbage and carrots … and not much else. ‘Tis March. The “hungry” month, I’ve seen it described. I promised to make a coleslaw next time with the next cabbage.
**mini-recipe** Japanese broth: Eight cups of stock, 1/2 cup tamari sauce, 4 tbsp sugar, salt to taste. Heat to boiling. Serve over noodles. At the table, sprinkle individual bowls with scallions, hot pepper flakes, and Chinese five-spice, to taste.

**Wednesday’s menu** Lentil curry (crockpot). Baked rice.
**Convenience, again** It took a bit of effort during the breakfast hour, but lentils + crockpots = easy. And then I went out for supper (with my sibs) and didn’t even taste the meal I’d made. Albus told me it was pretty good and he’d had two bowls. There seem, however, to be a lot of leftovers.

**Thursday’s menu** Leftover noodles fried with leftover cabbage and tofu.
**Thanks Kevin** Over the supper prep hour, I took AppleApple to her goalie training, and did some secondhand shopping. It was nice to return home to a tasty meal; I rarely object to reinvigorated leftovers.

**Friday’s menu** Leftover lentil curry. Leftover rice. Fresh baguette.
**Guess what?** That lentil curry did taste pretty good. It definitely hit the spot after a run/soccer practice. This menu was a little light on the veggies, however. 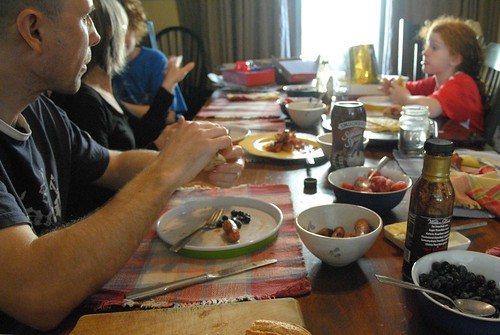 **Cooking with kids** Albus’s menu. Crepes with maple syrup, and strawberries and blueberries from the freezer. Bacon. Breakfast sausages. Baguette.
**Mmmmm** Some small debate over what to call breakfast-for-dinner. Brupper was roundly rejected. Albus thought it should simply be called brunch. Whatever it is, it was delicious and there were no leftovers. Not a scrap.