The cure for November or “Christmas-cookie Sunday” #CCS 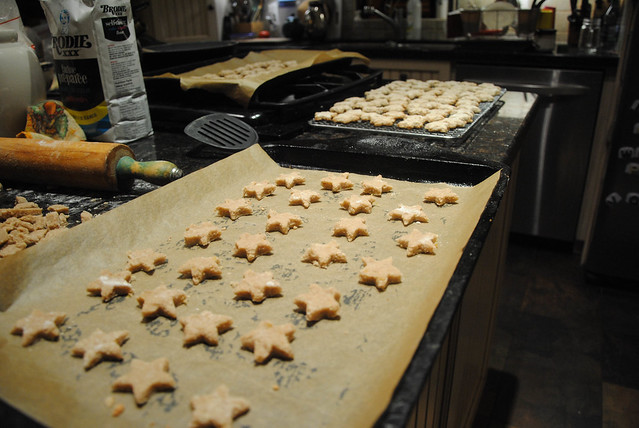 I’m putting a timer on everything I do today, in an effort to maintain a disciplined schedule. Blogging was not on my to-do list, but I have to report that I found a cure for November, at least a temporary one. It’s called December. Yesterday, we started December a day early and dragged the tree out of the attic, which the kids decorated (the younger ones with greatest enthusiasm). AppleApple and I also decided, impulsively, to start a new advent tradition: Christmas-cookie Sunday, or, as her big brother said, as he dashed through the kitchen, “Hashtag CCS!”

It was quite late in the day when we started our baking project, and I had my doubts about the five-ingredient, flour-less, oil-free cookies chosen by my daughter (and in truth, our version looked only sort of like the polished shining cookies in the cookbook’s photograph), but it all came together smoothly; moreover, I highly recommend these cookies. They are crunchy and chewy and lemony. Plus you can tell yourself that eating one is almost like eating a tiny little protein bar. That’s what I told myself when I ate one after coming home from spin class this morning.

Now, to return to my disciplined day. Timer just went. 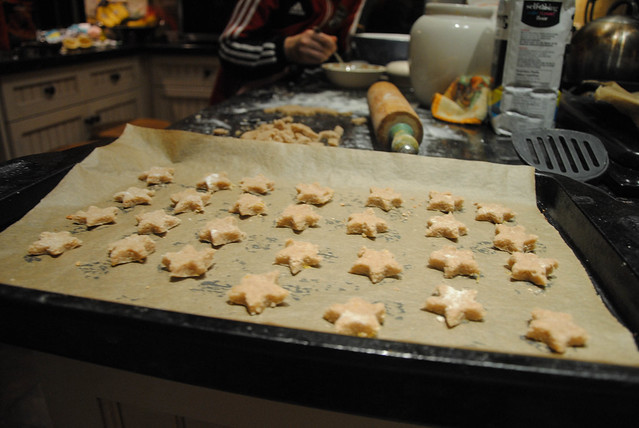 Grate the zest from one lemon into a small bowl. Sift 2 and 1/2 cups icing sugar into a large mixing bowl. Add 3 cups ground almonds, the lemon zest, and 2 teaspoons cinnamon. Mix together. In a separate bowl, beat two egg whites until stiff. Fold the beaten egg whites into the almond mixture, and stir until the batter comes together. It will make a stiff dough. If it’s sticky, add more ground almonds.

Divide the dough in two to make it easier to roll out on a lightly floured surface. Cut out cookies (we used a tiny star cookie cutter from the Bulk Barn), and lay onto baking tray lined with parchment paper. Bake for 5 minutes in a 400 degree preheated oven. Use up all the scraps by gathering and re-rolling.

Let cool on rack. Ice with a lemon glaze made from 1 and 1/2 teaspoons freshly squeezed lemon juice mixed with 1/4 cup of icing sugar (or more). We used three batches of glaze to ice our cookies.

PS Next week we plan to try Pfeffernusse for #CCS. If you have suggestions for favourite Christmas cookie recipes, please post them or email them.

PS#2 I’ve opened shop. Signed and personalized copies of my book are now available for order on the sidebar. Optionally, for a better price on Girl Runner, my Canadian publisher, House of Anansi, is offering a one-day deal, 50% off (TODAY! DECEMBER 1!).

There is no First Prize
Snapshot, briefly