Patrolling the back yard 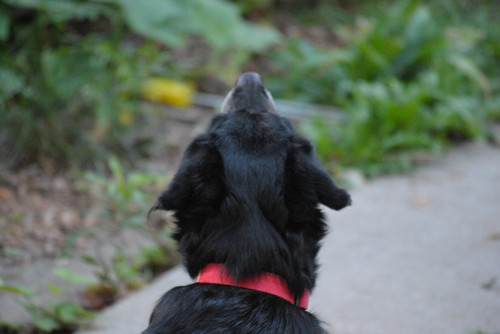 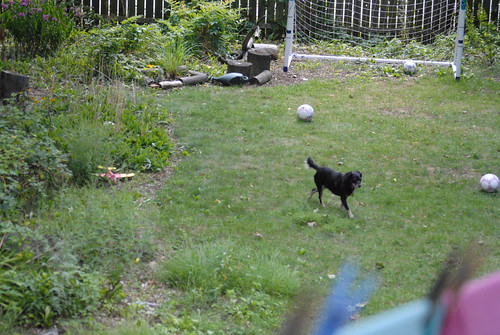 Yup. I think I’m getting used to having these four-legged critters around. 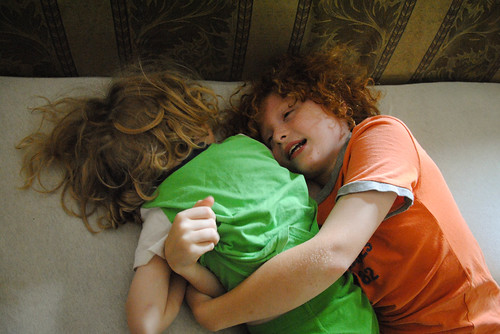 saying goodbye to his little brother

Overnight camp was not a huge part of my childhood. But I did work at a wild and beautiful camp the summer I was sixteen (I was the pony girl). And I remember well the feeling of waking early, eating communally, singing around a campfire, and being someplace where the only thing on the agenda, really, is to have fun. To be outdoors as much as possible, and to play.

This week, my biggest kids are away at camp. No ponies at this one, but lots of friends, and already a few years of happy history behind them: this will be their third summer. They know what to expect, and they were looking forward to it when they left yesterday. I could detect not a whiff of anxiety in their goodbye demeanour.

And actually, I feel pretty okay too.

I’ve found babysitting for the week, so I can keep plugging away. Our schedule will be a little lighter without the extra soccer practices to go to. And the two little kids can soak up some time and attention.

Meantime, I’m glad the two big kids get the chance to experience a bit of independence, a bit of freedom, and the beauty of what feels like wilderness (even though, in reality, it’s only a few minutes from the nearest town).

The week will go fast. I’m looking forward to hearing the stories and the songs. To seeing what changes the week has brought (last year, both seemed taller, and more mature, after just one week.) And to doing piles of laundry. 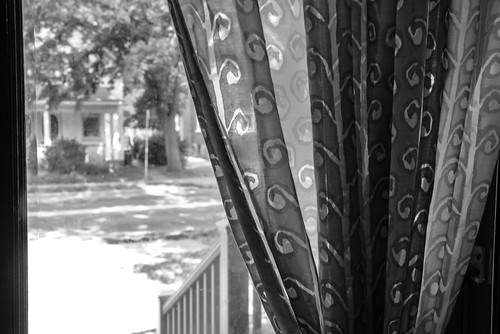 This summer, I have yet to can a thing. I’ve frozen a few odds and ends here and there in small batches, usually leftovers from a meal (ie. too much corn on the cob).

I haven’t found the energy for it, and I’m not sure why.

This morning, Fooey and I looked at Soule Mama’s blog together. She loved the photos of children feeding chickens, playing with pigs and sheep, and picking veggies in the garden. “The children have to do a lot of chores,” she observed. I said they were homeschooled, and she said, “Well, of course! Because they have so many chores, they don’t have time for school.” Let me add that she said this with a very positive tone. Not “chores” as in drudgery, but “chores” as interesting activities.

I felt a pang for the seasonally lived life. “It’s lot of work,” I said. “It’s their whole life.”

I know that’s why I read Soule Mama’s blog: to live vicariously, just a tiny bit. To imagine pulling off muffins baked before kids come downstairs and weeding with baby riding on my back and preserving food and painting rooms pretty colours and renovating an old farmhouse and being a homesteader. When I was a young teen, I spent many happy hours imagining life as a homesteader, out in the middle of nowhere, building a self-sustaining life from scratch. I don’t know why it appealed to me, but I know it was a fantasy that hasn’t had much impact on my actual day-to-day life, even though remnants of the fantasy remain, fondly.

Today, I am thinking with admiration about all those hard-working people who live seasonally. Right now, in Canada, if I were living truly seasonally, I would be canning like crazy. Now is the time! Grab the moment! Preserve summer. Instead, I’m lost in thought before a computer. I’m at a soccer field until dusk. I’m going for a run. I’m vacuuming dog hair.

But I have some angst over not canning. I feel like I should be. And I feel tired too, worn out, a bit, by the continuous nature of living, the daily demands, being unable to catch up or keep up. Laundry, meals, basic family hygiene, household demands. We attempted to get the kids doing regular chores earlier this summer, and we didn’t stick to it. (We should try again, for their sake and for ours.)

I need something similar to attend to, a project larger than myself, more meaningful. (Or is this just August talking–a wistful month, I always find, during which I feel nostalgic for what’s passing even though it’s still right here all around me?) 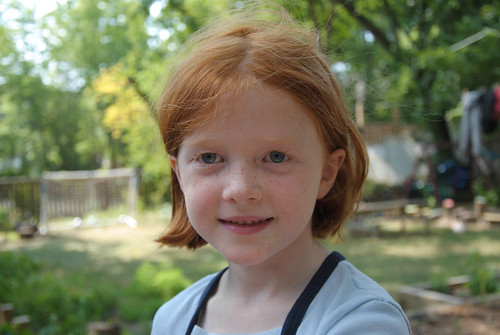 I’ve been quiet here. Blame summer. Our days are feeling lazy and hazy and kind of effortless, even though it’s also busy. Swim lessons have occupied our mornings for these past two weeks. Tomorrow’s the last day, which feels bittersweet. The kids will be happy to be done, but I’ll miss the routine, and the feeling that we’re soaking up summer.

In other news, I almost hesitate to say it, in case it falls through, but we may soon have a real family pet (and not just an ant farm–which the children made yesterday with their very creative babysitter). I won’t say more … yet. But excitement is high, and I include the parents in that too.

On yet another note, one small soccer observation. I’ve figured out that there’s one really simple way to be part of a team: show up. I’ve noticed that as the season has gone on, I’ve gained affection for those teammates who arrive every week, ready to try their hardest, regardless of skill level. That said, I’m hoping to continue to improve my skills, even while I recognize more and more what my weaknesses are (that’s a good thing, right? I mean recognizing weaknesses?). I’m considering looking to play indoor this winter. I hate getting beat up on the field, but I actually love the game itself; so the game is winning out, at least so far. I want to play it, I enjoy playing it, I enjoy talking strategy after the game, and I enjoy visualizing how I can get better at it.

Finally, I participated in a project this week called For the Love of It. I’ll let you know when it’s up, with more behind-the-scenes info then. (I’ve gotten used to being on the other side of the camera/questions, so this felt a little strange.)

And now, I’m off to write — fiction. Which you know I’m doing for the love of it. And that’s a pretty awesome reason to do anything (see all of the above). 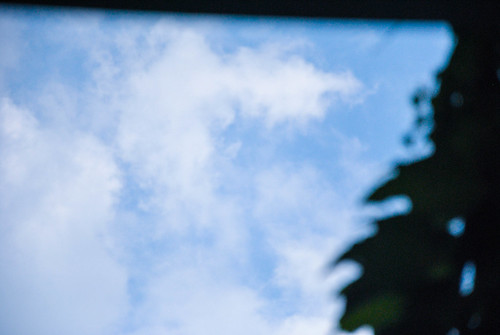 The heat has stopped my brain from working.

It’s wow heat. Heat that remains present at 8pm on the soccer fields. Heat that keeps a body up at night. Heat that hollers HOLIDAY!

I had no babysitting today and it was a treat. What could I have accomplished anyway? I’m filled with lassitude.

I am thankful for fans, cold water, ice cubes, swim lessons, and a vehicle available to take us to places like the mall. Seriously. We went to the mall today and wandered around in the cool air and forgot how hot it really was, at least briefly. Then we went to the library (also air conditioned). Now the kids are vegging with a movie.

And I’m discovering that my brain is not working at peak capacity. So this is all I will post for now. 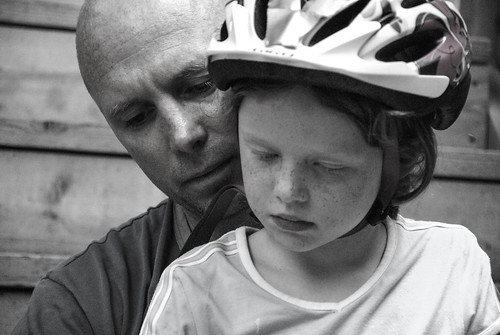 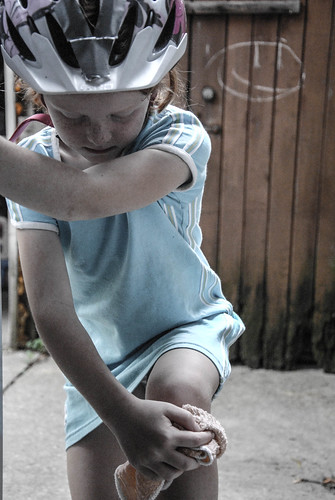 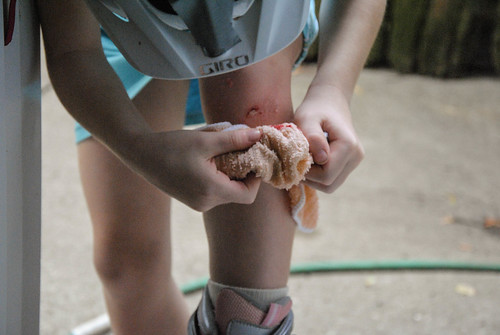 roller blading, before and after

Hot, quiet, humid. That’s our Sunday. Looked like rain. Did not rain. One soccer game still on the menu (mine). Though need bread, have not baked bread; see hot, humid. Can’t bear the thought of turning on the oven.

Also wrote a new short story this weekend — fiction!!! My first attempt since writing the last of The Juliet Stories (which, a very few of you may be interested in knowing, was “She Will Leave a Mark” from the first section.) It felt like breathing or something. Essential, natural.

Oh, and I have to post a link to this truly amazing review, by a book blogger called Buried in Print. Quite enough to swell the head, methinks, so I’ll only read it once.