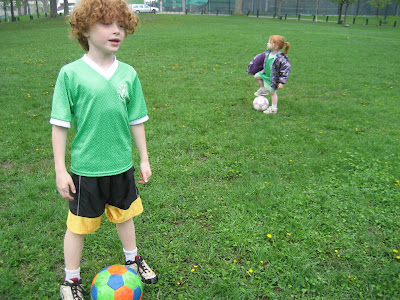 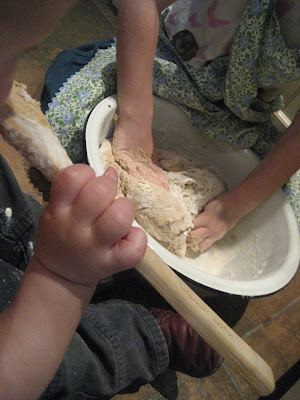 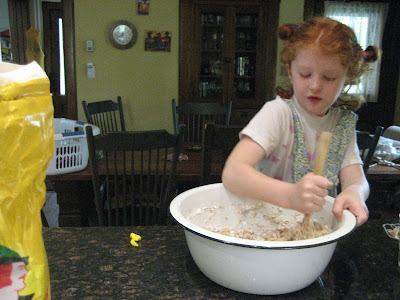 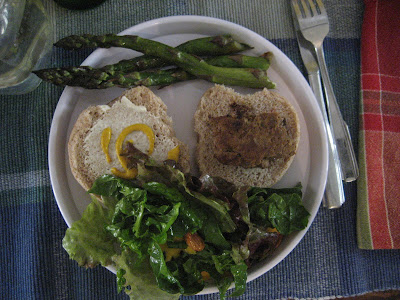 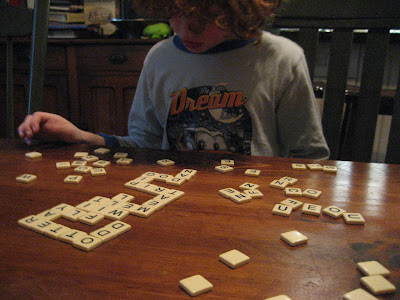 There’s been an interesting conversation going on about how a blog’s tone develops, especially these mommy-blogs, in which stay-at-home parents reflect on their daily lives; and I’ve noticed this blog has really changed since its inception. More photos. Less text. But also less complaining? Less detail, perhaps. I’ve begun to treat this space more as a scrapbook than a diary. But is it painting a picture of our daily lives that is too idealized? Does it look like we spend our days cavorting in puddles, our fronts dusted in flour, our minds peacefully occupied? Well, that’s ’cause we do.

Blogland is nothing if not selective. And I like selecting the good stuff. Tantrums? Siblings whacking siblings? Last-minute-supper-prep-madness? Bathtime resistance? “I’m so bored.” Disturbed nights? Late-night glass of wine? Too much coffee? Warts, snot, burping, dirty diapers? Yup, we’ve got ’em, too. But I haven’t started photographing that stuff yet. Maybe I will. Or at least slip in a few views of the darker side of this lifelong adventure, just to balance things out. No promises, however. 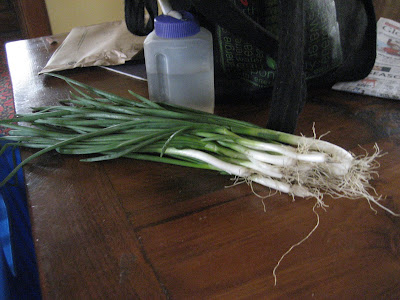 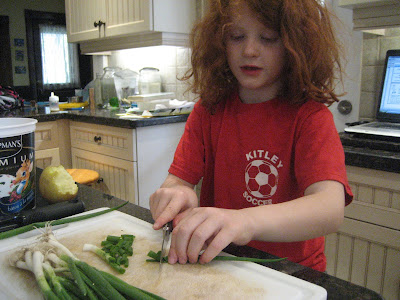 That previous post was too long. Note to self: no drinking & blogging. Above, our first local food of the season … green onions grown in neighbour Nina’s garden!! Wow. Things this tall and edible are growing in gardens around us right now. I hadn’t realized how starved I was for fresh and green–woke bright and early to fantasize about market morning and to make a list–then sent my hobbling husband with two children. And here this post shall end, perhaps too soon; but it’s soccer in the park. Which means it must be raining. Or just about to.

Soccer in the Park, the Deluge Version

We arrive early, wondering … will anyone else show up? And, is that thunder? 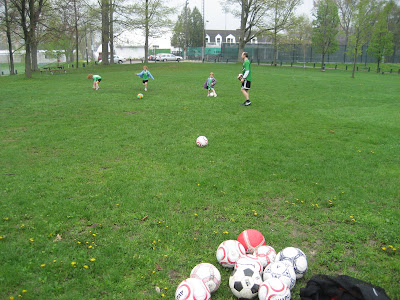 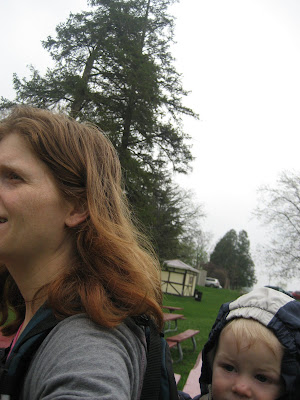 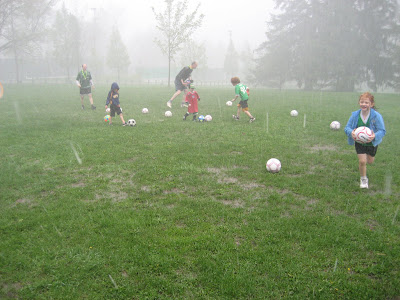 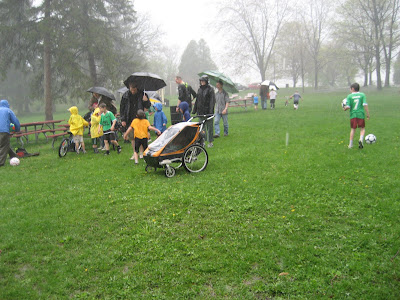 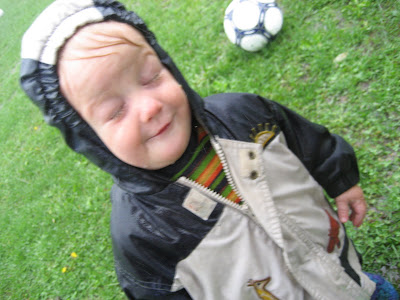 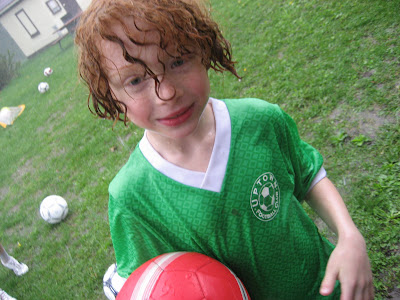 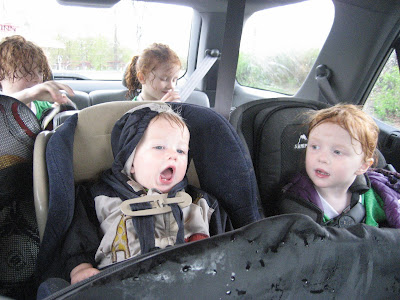 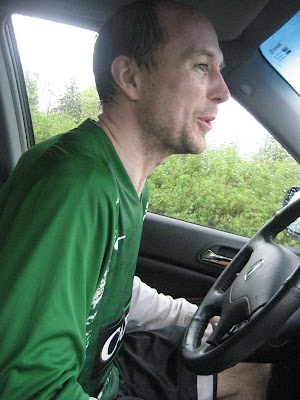 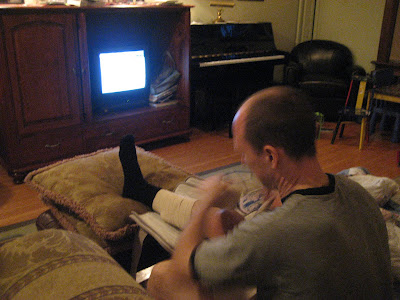 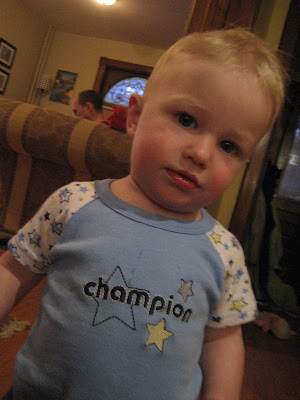 These photos commemorate one of the last days of the splinted knee, which happened to coincide with Kevin’s favourite time of the year, the first round of the hockey playoffs when there’s a game on every night, and our television is tuned to it. First round doesn’t seem to be over yet, but the splint is officially off, the knee officially healed (I keep asking, “Okay, so the bone is completely, totally healed, like it’s not going to break apart if someone bumps into it?” and Kevin keeps saying, “Uh, yah, that’s what the surgeon said.”). In fact, after six weeks of not bending his leg, AT ALL, it’s time to do the opposite and figure out how to get it to bend readily again. (“So, if it’s all healed,” I asked, “why wouldn’t you be playing soccer this summer?” And he replied, “Because I can’t, um, run. At all.” “But you can bend your knee now.” “Well, in theory, I can bend my knee, but it doesn’t bend more than ten degrees right now.”) Right.

The Good and the Trying

The good first, shall we. Kevin’s at soccer tonight, which means he rushes out the door after inhaling the supper I’ve thrown on the table early in order that he can inhale it and rush out the door. Phew. My attitude about this has improved greatly over several seasons, and I’m being honest here (I think) when I say that I don’t begrudge him time to run around a field attempting to boot a ball into a net and occasionally coming home wounded (giant egg on head so far this summer, which turned into the most gorgeous purple black eye, like he was a performer in the Rocky Horror Picture Show). Where was I? Oh yes, my non-begrudging-ness …

The good. After Kevin leaves, I often feel at loose ends. I don’t know why it should be different to be left alone with the kids in the evening as opposed to in the morning, but it is. I feel less capable, less sturdy, less resolved. So tonight I drifted into the living-room, laid baby CJ on the floor (he’s happier rolling around than being held these days), and started playing the piano. I almost never play the piano anymore. When I do, it turns into someone on my lap hammering the keys and demanding Old MacDonald. Completely out the blue, and without the least premeditation, I sat at the bench and started playing the little riff from the Rolling Stones’ song that goes “You can’t always get what you wa-ant …” It’s a bluesy little riff, repetetive, and though I never figured out the exact chording and timing for the next bit–“You just might find, you get what you ne-eed”–it didn’t really matter, I just kept playing it over and over. (Is that even the right line? I’m really not sure where it came from or why it entered my head). The kids seemed lulled by the music, and interested. How did I know that song? What was that song? Get out the drums, I suggested, and a mini-jam-session erupted, dancing and drumming. I played a couple of other old songs, and then caved and played out of a kids’ songbook (A’s request). But it was soooo good. Our evening progressed so much better because of it, I am sure.

Ah, but how’s this for trying: realizing post-snack that their teeth still needed flossing (Kevin’s job, and I don’t know his method, but it sure as heck looks better than mine). Baby CJ was so fussy by this point that he was only happy in his sling, so I took each child in turn on the couch with the floss and CJ fussing and stuck to me and half-blocking the view of the teeth, my fingers occasionally getting chomped; the whole scene struck me as impossibly comical. But still trying. Also trying are AB’s bedtime requests. Despite supper and a snack, she regularly discovers that she is So Hungry as soon as the light goes out. Or better yet, as soon as Mommy or Daddy has made it all the way downstairs. “Mama or Dadda?” she will call coaxingly, then quickly the ‘plaint grows louder. Tonight I couldn’t turn to Kevin and say, “Your turn.” But you know what–cookies and the removal of them from the lunchbox turned out to be an effective motivator.

So here I sit, F just re-deposited in her bed (she’s having a hard time falling asleep this week, due to napping in the stroller on the way to pick the kids up from school), blogging instead of doing the dishes. We had a simple and popular supper tonight: whole wheat rotini, a sauce made from completely local garlic, onion, green pepper, and tomatoes (tomatoes and pepper thanks to a neighbour’s front-yard-garden! oh–and yes, I got permission before picking!), the whole lot mixed together with sliced nitrate-free local hot dogs (Nina). Hmm, does that count as a recipe?

Oh, our onions are off the table. They’ve been replaced by garlic bulbs. But the onions are now hanging rather attractively in my cast-off pantyhose down in our basement. Kevin sorted out that project. We also have a bunch of potatoes stored in paper bags in the cold cellar. Online research leads me to believe we can’t store the potatoes and the onions near each other–but I couldn’t find any answer to the question: how near? Like, in the same cold cellar? Or, side by side in the same cold cellar? If anyone knows, please comment.

The dishes are calling. In voices tiny, but persistent. Hello over there basking in the glow of a computer screen. You will sleep better if you wash us right now. (But will I?). Enter Kevin. He’s home. “Are you blogging?” Uh, yah. And do you want to do the dishes?

Okay, this is way too easy to do. I sense an impending addiction. It’s like being able to blurt out anything to anyone (or, as the case may be, no one) at virtually any time, with (almost) impunity.

To set the current scene: baby is lying on a blanket on the floor, “talking” (shouting, more like it; he’s got a big voice), surrounded by bits of Playmobil, while the other kids play something I can’t quite make out. I love their imaginary games, though truth be told, they’re too obscure to follow, and seem to rely on repetition: “I’m putting this bed in here, because they have to sleep in here.” “But then there is no door.” “This is a door.” “I have to pack up all your jewels.” “Okay.” Enhanced by incredible engine noises from A, age 7, and always but always the loudest child anywhere. Not because he’s shouting but because of his sound effects, which he’s been performing since infancy. Airplanes roars, explosions of all kinds, motors, engines, robots. He seemed to come by his repetoire instinctively, before he could have known what noise a car would make.

I wasn’t going to write about the kids. Much.

Anyway, that’s the scene, and I’m on the computer in the kitchen (bad placement for someone prone to check more often than she should), and there are dirty dishes on the counter, pots unwashed, leftover supper food just put away (pasta, with almost entirely local homemade sauce and salad; cherry tomatoes from our driveway garden!), and Kevin’s off to play his weekly soccer match. Let’s hope he comes home uninjured. (Black eye a couple of a weeks ago. Ouch). The Olympics are on in the background, too. And I’m about to floss the kids’ teeth, one by one, with them lying on the couch with their heads in my lap. All of the ones who have teeth.