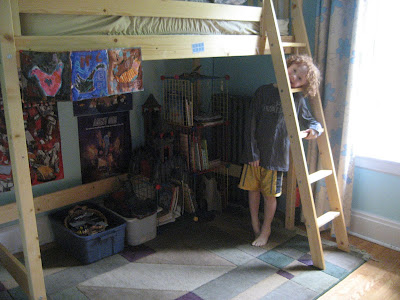 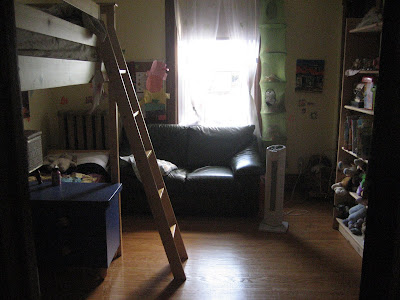 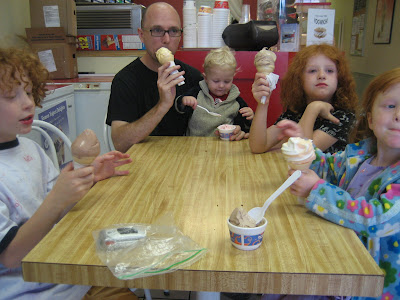 Weekends are chore times, and four busy summery weekends had passed without us being here to do the picking up. The kids’ rooms were particularly disastrous. I made several mid-week attempts, with children helping, to tidy their rooms, without getting much of anywhere. Finally, yesterday, we awoke with the gleeful knowledge that we had nowhere to go and nothing much to do. Can one clean gleefully? If you’re Obscure Canlit Mama, yes, yes, you can. There’s something so satisfying about cleaning when it’s really beyond dirty: moving furniture, organizing, purging (don’t tell the kids). Under the couch in the girls’ room I found: fuzz, fabric, dead bugs, a spider’s web with large unhatched egg, crayons, pencils, hair bands, toy cars, Little People figures, several bouncy balls, a nightgown (!), a bath toy, and that’s just what I can recall. Didn’t take any before pictures, but see above … the rooms: floors cleared, shelves tidied, everything in its place and a place for everything. It took hours. And the kids didn’t help (which was helpful in and of itself; thanks, Kevin).
After supper, we hitched up the new bike stroller–yes, we did! After contacting the manufacturer directly, Kevin discovered that the necessary parts were living in our basement (we’d had them all along). So we went for a family ride, all the way to TCBY for frozen yogurt, and then a bit further, too. After jogging with the stroller these many weeks, biking with the stroller didn’t even feel like real exercise. Which was pretty nice.
:: :: ::
Obscure Canlit Mama has news. It’s kind of good news/bad news, except I can’t separate the two. My agent called on Friday afternoon. To set the stage, we’d just gotten home from Nina’s buying club, CJ was pounding on a wok with a barbeque tong he’d dragged out of a bottom drawer, and I was preparing a baked mac-and-cheese for the kids’ supper so that Kevin and I could go out to celebrate our anniversary, so my hands were kept busy during the conversation. My agent hates to give bad news (who doesn’t?). Listen, there’s bad news and then there’s bad news. Along that spectrum, this was disappointing but not unexpected. She doesn’t think the stories will sell (to a publisher). She’s read the earlier novel version, and feels the stories leave too much out, all sorts of research and context; besides, she says, it’s grim out there and publishers aren’t buying novels these days let alone a difficult-to-sell, almost-certainly money-losing dreaded short story collection. But. She said, Let me just toss an idea out there … have you considered writing this material as a memoir?
Um. No.
She said she’d give me a few weeks to mull it over, and call back.
So, let me ask you: if you could choose, would you rather read a short story collection or, hmmm, let’s call it “creative non-fiction,” set in Nicaragua in the early 1980s, during the contra war, told from the perspective of an American child living in Managua, whose parents are peaceworkers? In other words, would you rather read what could have happened, or what really did? Be honest.
Here is the other thing my agent said (to paraphrase): You are meant to be writing, this is what you’re supposed to do.
It’s a tough thing for me to believe, sometimes. I know the work that will be involved, maybe. But I also know I could write what she’s suggesting. I could do it. And it wouldn’t have to mean giving up on the collection of stories, because the two would be quite different beasts.
The real problem is that contemplating taking on this project would be like moving that couch. What awaits beneath? Do I really want to know? And the things I’d choose to purge or to arrange on the shelf: are they even mine, or do they belong to too many other people, too? 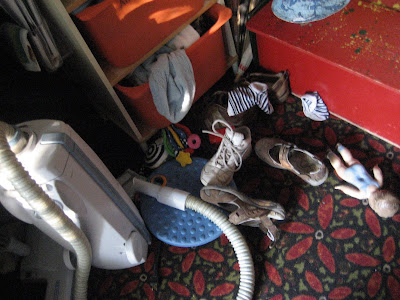 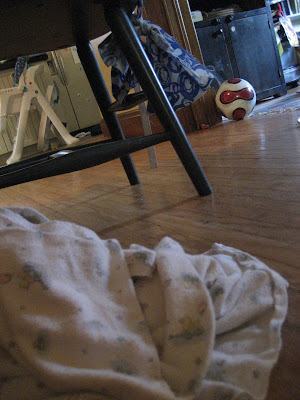 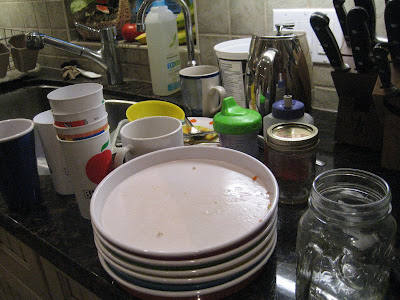 To summarize our weekend: rain, putter, party, mojito, party, mojito, party, slumber, wake, drive, bridal shower, munch, drive, coffee coffee coffee! mud! laundry! piles!
Yesterday evening, Kevin and I engaged in how-much-tidying-can-you-squeeze-into-fifteen-minutes-honey? And managed to dislodge a few crumbs, if not the bulk of the disorder accrued over days upon days of general household living. A place for everything and everything in its place: fundamentally, I’ve got that down. In practice, however, I am accomodating more and more the notion that layers, spills and dirty dishes add character.
In stroller news: friends have gifted us a replacement, and I’ve stopped creeping ebay and kijiji in a vain effort to find our old one. I want such losses to make me better; or at the very least not to make me bitter. Bitterness is such a self-disfiguring emotion. Life is loaded with hardships to overcome, and this weighs very lightly on such scales. So, better not bitter, better not bitter, better not bitter. Onward.
Supper plot: green pasta (arugula, sunflower seeds, olive oil, garlic, and fresh basil ground together into a pesto-ish paste over whole wheat pasta; add-your-own parmesan), and a side dish of tofu stir-fried with green garlic and asparagus and tamari sauce. To be continued … 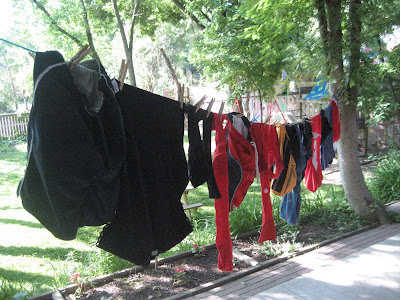 It’s a beautiful sunny day in a week that calls for rain, so naturally I’m throwing the clothes onto the line, when I turn around and say … hmmm, that looks kinda counter-productive. Today’s construction innovation involves great plumes of black smoke wafting from the half-filled pit. 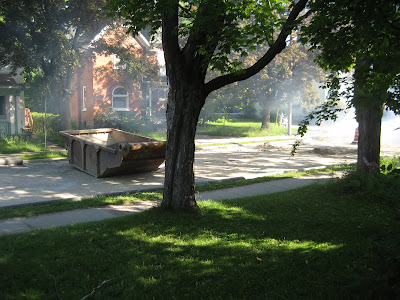 On another subject altogether, last night Mama treated the kids to delectable and questionable and surprisingly expensive ice-cream sandwiches to celebrate the end of this session of swim lessons; everyone passed, hurrah. The sandwiches sent the older children into some kind of fugue state of angelic behaviour, while having the opposite effect on Captain CJ, who literally lost his mind. I love the frantic treat-stuffing look in his eyes, below. 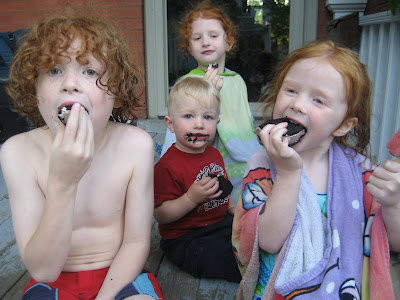 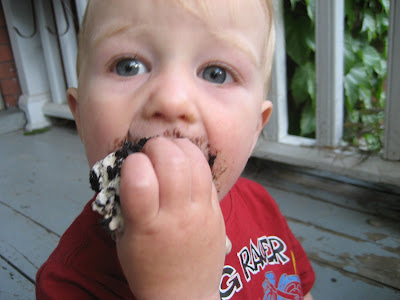 I’m currently employing a method of housecleaning that some of you may be familiar with. I call it “Wow It Looks Gross in Here,” and it has such sub-categories as “Was Someone Eating Something Crumbly in This Room?” and “How Much Water Actually Stayed in the Tub?” and “Oh No Not the Dress-Up Clothes.” Among others I enjoyed thinking up whilst vacuuming after supper tonight. 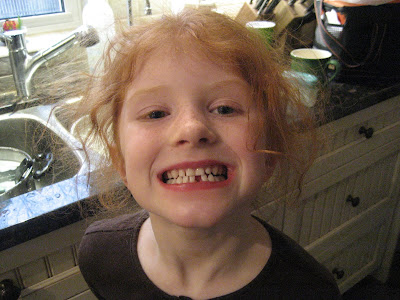 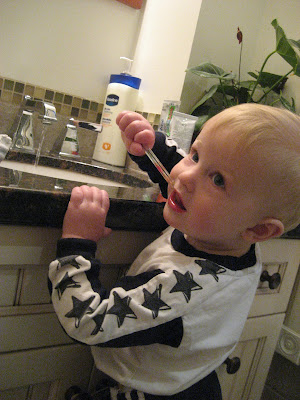 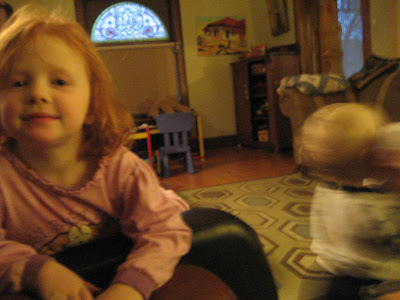 Inspired by Katie’s comment on the previous blog entry, and the website she suggested, I made a set of index cards with daily chores and weekly chores, and introduced the concept of an allowance to the kids. The oldest were ridiculously enthusiastic. Chore categories so far:

Daily: Wash dishes. Dry and put away dishes. Fold laundry. Set and clear table. Pack lunches.
Weekly: Vaccuum. Clean your room. Clean bathrooms.
Additionally, an all-family daily task: the 10-minute tidy!
The children are already saving their allowance toward a Bone book. And I already felt a weight lifted last night, the feeling that we were all working together toward the collective goal of a liveable house, not one person martyring herself to the domestic cause.

That’s been this blog’s focus, and I will stick with it. But. The question is a little bit larger than that: What is the tone underlying? Why do this? Looking back, what I most appreciate about these blog entries are the beautiful reminders of day-to-day life, the moments that transcend the ordinary while living within it. On some days, those moments can be hard to find, but even the process of looking for them feels helpful, feels like it’s building something good, and strengthening. And so easily forgotten, too. The photographs, too, have been an unexpectedly happy addition, and pleasurable challenge.
I have bigger blog ambitions, but can’t promise these will come to fruition. Daily themes: Recipes. Parenting ideas/questions. Writing. Doula-ing. Or today’s: housekeeping.
Page 20 of 25« First«...10...1819202122...»Last »