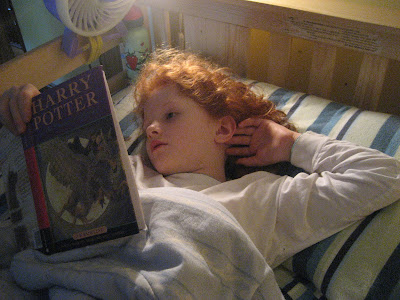 I’m writing again. And that means that most spare scraps of the day are poured into that work … and not into, say, doing the dishes, prepping supper, photographing my adorable children, or blogging. Gee, I still dislike that term. But can’t think of a better one.

Saturday, so we arose late, hoping CJ would sleep in (he did, a bit, following a just-before-seven nurse), and that the other children would go downstairs and play together (they did), and that they would FEED themselves. They didn’t. Inevitably, hunger arrived, wasn’t addressed, and led to an argument between Fooey (age four) and Albus (age eight). Over Duplo. Apple-Apple, meantime, has been in the position pictured above since waking this morning, save for a brief breakfast out of bed. It is now almost eleven. She’s reading the Harry Potter series at a rate of about a book per week, and is already on book three. Surely there is poetic justice in me having a daughter who cannot remove herself from a book–I get to understand first-hand how difficult that can be to watch. I fight the urge to jump up and down waving my arms while telling her: look at this wonderful world; don’t you want to go play road hockey with your brother?; wouldn’t you like to chat or something? But she’s lost in this other place. She doesn’t even blink.
“When you’re reading, it’s like you’re almost in another world, isn’t it, Mom? It’s almost like you’re a character in the book. And then when you close the book, the world disappears.”
Yup, like magic. I get it. I hope I’ll get there again, myself. I read all day long, but not in the same way. I skim the newspaper, dash through emails, scan other people’s blogs, troll through recipe books, I read aloud to the kids, process the endless stream of info that arrives in backpacks from school, lie in bed and savour a chapter or two in a personally chosen book before sleep arrives. Much of life revolves around text. Reading isn’t dead. But falling so deeply inside a book … that feels beyond my capacity to manage right now. There isn’t enough room, enough space in the day.
:::
This morning began like most Saturday mornings. I didn’t get downstairs till almost 10, though I’d been up for several hours. I changed the sheets on four out of five beds (couldn’t budge Apple-Apple), put away bales of laundry, tidied. Experience tells me that, when working on a project, it is unwise to move to another section of the house, even for a brief errand, because another project/child/need will suck me in. Last night, Kevin and I spent about two hours, post-supper and post-dishwashing PUTTING AWAY TOYS. We worked in tandem, sorting, organizing, throwing away, moving methodically through drawers and bins and across swathes of strewn carpet. Maybe we have too many toys. Or too many toys with tiny bits. Because we have places to put everything; that’s not the problem. It’s just that everything seems to migrate, up and down, piled into baby buggies and baskets, dumped and dragged, carted and reorganized for the sake of some marvelous imaginary game that it would seem cruel and foolish not to allow. Their methods of cleaning up, though sometimes quite enthusiastically practiced, don’t match up with mine. Albus, for example, would happily organize his room according to his own ideas, and it would look “perfect” to him: there would be multiple piles stacked on dresser tops and in the middle of the floor; there would be a forest of containers, each with three or four items rattling about within. “But I like it this way, Mom!”
:::
Made it downstairs. Have now breakfasted and self-caffeinated. Laundry is on the list, as is vacuuming. Unless I get called to doula at a birth! My friend is due–was due–this Thursday past. Every time the phone rings, Kevin looks at me and I look at him–is this it?
:::
Do any of you have Sigg water bottles? If so, the company is doing a voluntary recall due to tests that showed their old liners were leaching a nasty chemical. This week, we replaced a family’s worth of rather battered bottles for pretty new ones, which have a different liner. Which will leach heaven knows what, but hey. Better than disposable. Blue Skies Yoga and Eco-Store will exchange your bottles, no questions asked. That’s Apple-Apple’s brand-new ladybug bottle behind her in bed. Always hydrate while reading.
Swimmingly
Too Much Running?