Back to the Present 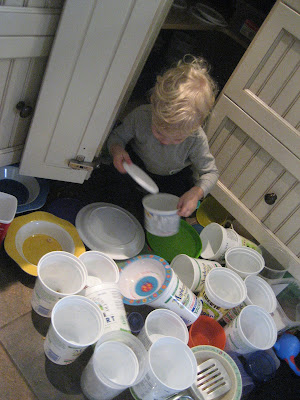 Attempting routine after a decidedly not-normal week, with ambivalent results. Three children returned to school, one jolly (the smallest) and excited about sub day, one with well-brushed hair, and one feeling queasy about entering school after a week off. I suggested coming to pick him up early, but he thought that would just be weird. I contemplated calling the school mid-way through the day to ask his teacher how he’s getting on, then realized that would be even weirder. From his point of view.
After a week of excitement and mealtimes askew and late nights and visitors we all feel unmoored, rattling about, dithering, sleepy. I am staring at a handscrawled list of to-dos, on which “blog” does not appear. This is what CJ’s doing on the floor beside me, chatting quietly to himself. Just noticed I’ve left a package of frozen hamburger thawing on the counter in a puddle of bacteria-laden mush. Sheesh.
And now the kid is throwing things. This is my cue to depart for the out-in-the-world errands that need doing, while it’s just the two of us, and we have a vehicle at our disposal.

Update, on a Rain-Spattered Day
Open