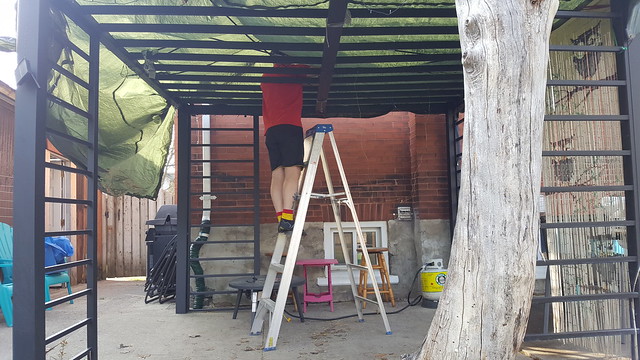 Inquiries for the universe…

A few years ago, after returning from a three-week writing residency in France, I put an idea out into the universe: hey, universe, could you send more cross-disciplinary collaboration my way? I’d worked with a wonderful actor / writer / translator as part of the residency, and both of us hoped to find a way to create together again. The universe didn’t align for the two of us to reconnect, though we tried; however, as so often happens, another door opened. In fact, a few different doors, one leading to the next. The first was that I began spending several mornings a week with a young woman who had recently come to Canada with her husband and children; she couldn’t get into a language program, so I volunteered to help her with some English studies. Really, what I remember most about those mornings are our conversations. I realized that my neighbourhood, my work, my friend group, even my church was its own bubble, a comfort zone, and pretty homogenous; and that I had a strong desire to connect with people across the possible barriers of language, religion and culture. The idea for The X Page storytelling workshop grew out of this friendship.

And lo and behold, The X Page became a forum for cross-disciplinary artistic collaboration, as well as new friendships and connections. Our third season starts this week, and will happen entirely online. We’ve adapted, but the goals remain the same: artistic collaboration and exploration, and cross-cultural conversations and connections. It genuinely feels like I sent an idea out to the universe, and the universe answered.

Today, I’ve woken with another kernel of an idea: Hey universe, could I expand on the X Page workshop somehow, to make its goals available more broadly, to many more people? Here’s the spark: Before drifting off to sleep last night, I read a New York Times article about an Australian community-building concept called “The Shed.” Apparently, these “sheds” began as retreats for retired and out-of-work men, and only recently have women started their own “sheds.” The story is about women taking over part of an unused school building; their shed is run by volunteers who are also participants, and it’s a mix of socializing (playing games, eating together) and crafts/ skills, like sewing, painting, gardening, cooking, singing in a choir. It’s a mix.

When I woke up, I was still mulling over the idea of “the shed,” which sounds a bit like a community centre, but which also seems more ground-up, or holistically invented and sustained.

It’s also all very post-pandemic, and impossible right now: gathering together, in person. But hey, universe: is there something here? What do you think? Maybe it’s the idea of a shared project, like “the shed.” Maybe it’s the fact that it’s free for all. Maybe it’s the concept of having space for a variety of activities, which I’ve found makes connections across barriers easier. I’m feeling this rather urgently right now: somehow we have to find ways to make more connections, especially outside of our bubbles, in order to nurture our sense of collective care. We’ve got big urgent crises to cope with. We need to find ways to have difficult conversations, and common ground. Social media does not work for these purposes; it seems almost designed to push us to greater and greater extremes. Belonging comes from something else, I’m convinced of it—outside of algorithms that fail to surprise us, that try to sell us more stuff, and that compete for our attention by exploiting our emotional weak points.

My attention is invaluable. So is yours. It is our time here on earth. It’s what we’ve got to give.

So if you’ve spent a few minutes of your attention reading this post, I send you immense thanks. And to the universe, I send this flicker of an idea: in what ways can I deepen my involvement in building community and connection on the ground, in the real world, both now and whenever we can meet in person again?