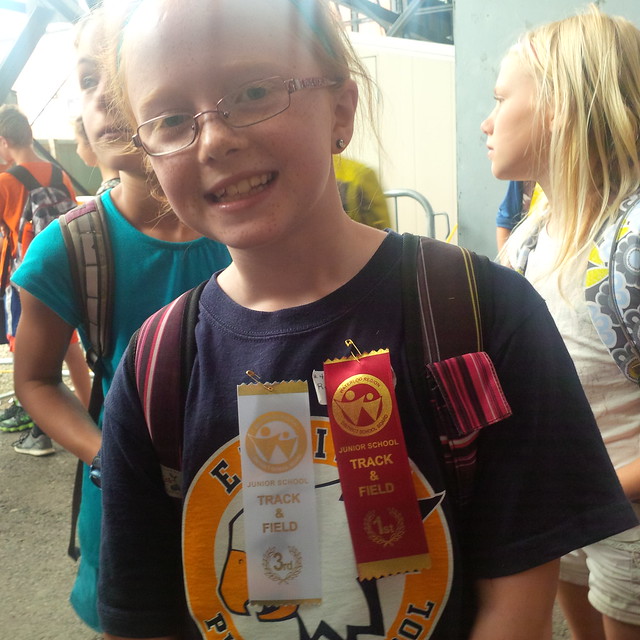 Another girl runner in the family.

This morning, I biked to watch my nine-year-old run her first ever race at a track meet: she was representing her school in the 60 metres. She was in the fastest heat and she placed third. She was glowing and proud. Then I sat in the grass and read a book and waited two hours for her next race. She popped by to sit with me a few times. She was nervous, proud, and excited about the meet.

Her second race was the 4 x 100 relay, one of the last races of the day. She was on the 9-year-old girls’ team representing her school against five other schools. All of the girls on her team are friends. She was running the anchor leg. They’d practiced and practiced at school, passing the baton, but this was the first time trying it out on the track.

I texted Kevin so he could be there too. We were standing near the finish line. I hoisted myself up on a railing to see better. Her friends are a speedy group, and when she got the baton, she was already in first place. I can see her running, running, running, arms pumping, up the black track, face shining. She crossed the line and knew she had won. The juniors at the school had walked over to watch the meet, and they were in the stands, all cheering for her: what a moment! Her second race ever. She crossed the line and her face broke wide with the thrill of it, the joy of it, and she jumped with her hands in the air, turning toward us. I won’t forget it. I’ll keep it here in my mind’s eyes, where I can see it anytime. She was shining.

I was crying, a bit.

What is the mixture of emotions that rise when watching your child accomplish something like this? She’s played soccer for many years, but she’s never competed as an individual before. We didn’t even know she could run so fast! Suddenly, I’m seeing my younger daughter with new eyes, seeing her as competitive and spunky and fierce and willing to throw herself into the race. So the emotions that rushed through me (and rush through me even now as I see that moment in my mind’s eye) are complex: pride, awe, joy, love. There is something amazing about seeing a child attempt something brave, something that requires courage, that asks the child to put herself—her effort, her identity, her physical self—on the line.

Were you nervous, I asked her afterward, and she grinned and nodded, Yeah, really nervous!

She was nervous but willing. And her nerves showed she cared.

In parenting, the reward is getting to see your children make their attempts. But it can also be heart-rending. There is a lot risked when we care and they care, no matter what it is we’re caring about—a big race, a tough test, a friendship, being on a team, performing at a recital or on-stage. These are risky moments that make us vulnerable—they are vulnerable and we feel vulnerable too. I don’t talk often about parenting through the experiences in which effort goes unrewarded; but those happen too, and those experiences are among my most gruelling parenting challenges, especially when the child cares deeply.

This is the parent I strive to be: See the child; respond to the child’s needs and individual character.

Where we've been: notes from away
Let's see where this goes