Where we’ve been: notes from away 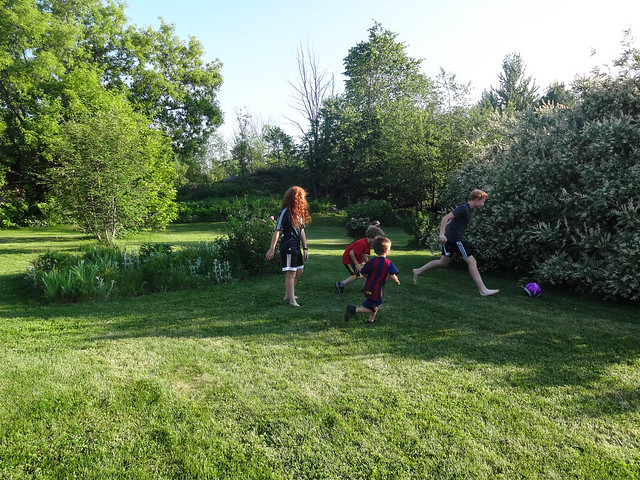 We’ve been on a whirlwind adventure, and now we’re home, with all the laundry that implies. I am trying to write this with a chatty 7-year-old nearby, who is missing out on his class’s field trip to the African Lion Safari due to an upset stomach (barfed on the bus, apparently; luckily this occurred before this bus had left the school grounds). So, yeah, we’re home.

Where have we been? 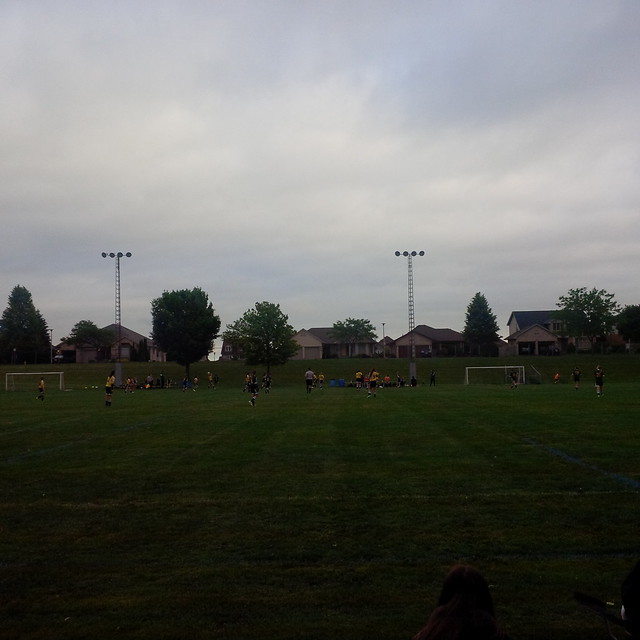 On Friday, I drove to Stratford to pick up AppleApple, who had been to see a play at the Stratford Festival (The Diary of Anne Frank). We had a bite to eat, then drove on through ominous weather to London, where she had a soccer game. So, here is another soccer field in my summer 2015 series.

Up, early. Packing for a variety of activities and adventures: everyone in the truck, and we’re off! 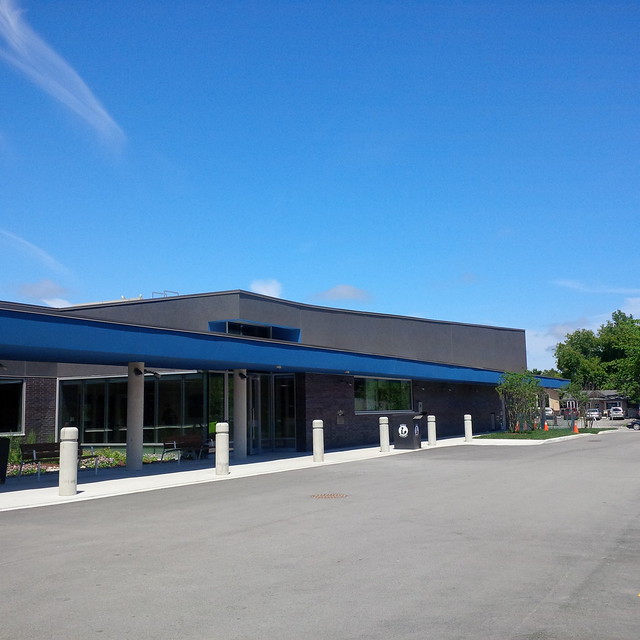 First stop: Innisfil, Ontario. Brand-new library. (Brand-new everything, from the looks of it; this is a fast-growing town.) Reading from Girl Runner. Kids had fun too. All good. Back in the car, headed down the highway. 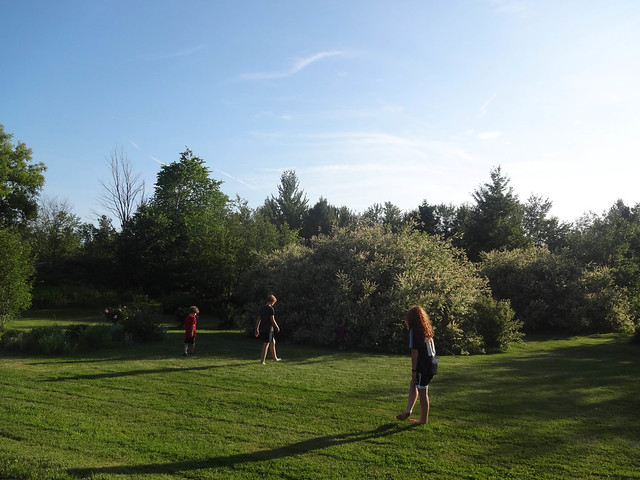 Second stop: Seeley’s Bay, Ontario. Visiting Kevin’s family, cousin-time, playing soccer and badminton, sleeping soundly, sleeping in! (Fooey appeared at bedside to inquire “Why are you still in bed, Mom? It’s 9 o’clock!” And it was …) Kevin and I even went for a run together, and managed not to get overly competitive (there’s a reason we don’t play Scrabble anymore). Packed a lunch, then back in the truck, headed down some back roads. 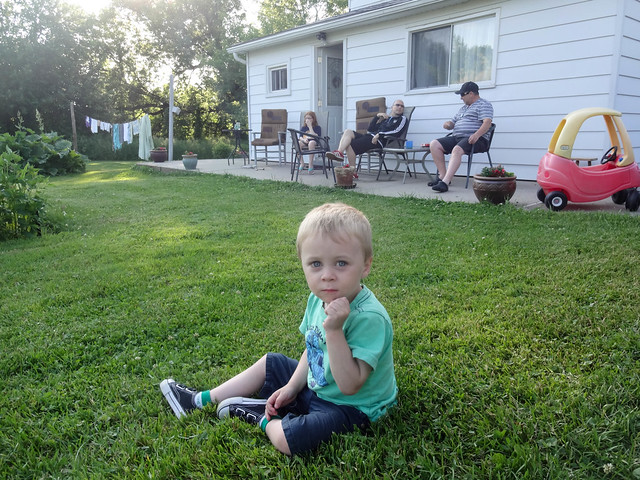 Third stop: Brockville, Ontario. I interviewed the son of Myrtle Cook, who won gold in the 1928 Olympics. What a treat to hear his stories about his mother’s career, both as a young athlete and later as a sportswriter, the only woman in the section. The kids were generously welcomed by our hosts, and treated to a swim in a nearby pool, and cookies and juice. It reminded me of my own childhood, when our family was frequently hosted by kind strangers, so often that we almost took it for granted that we would be welcomed no matter where we went. Maybe I still carry a bit of that with me. (This was a two-way street: our family home was also open to strangers and friends alike, and I remember playing with any kid or set of kids who happened along; my siblings and I could mix in with anyone, boys, girls, older, younger, didn’t matter, by dusk you’d have to holler to get us to come inside, we’d be having so much fun. It was an advantage of a peripatetic childhood.) Interview over, we were back on the road, with some pits stops for supper … and bathroom breaks … and more bathroom breaks … 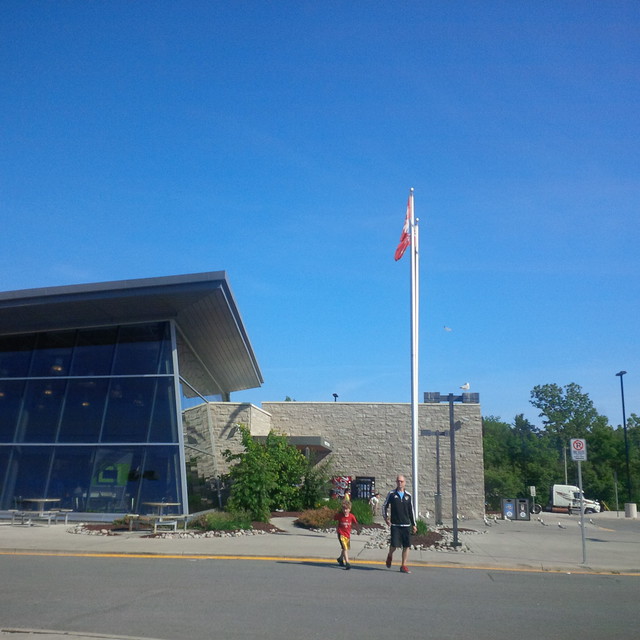 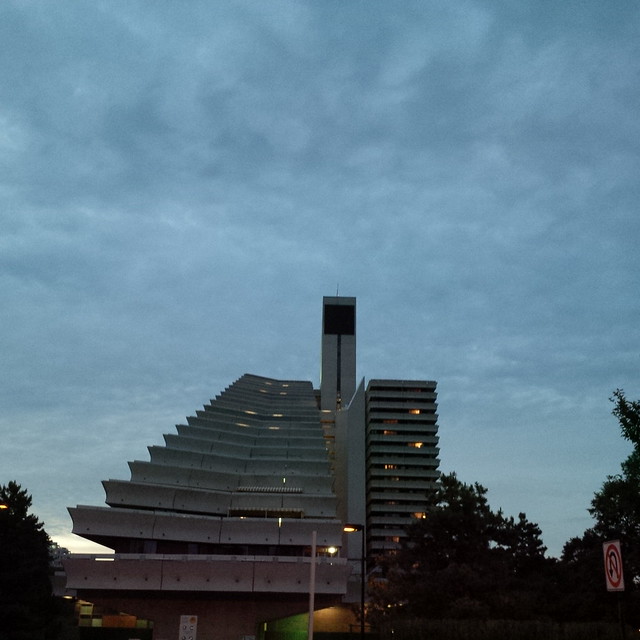 Fourth stop: Montreal, Quebec! We stayed near the Olympic Stadium for two nights, and went to a women’s world cup match: Canada v Netherlands (which ended in a 1-1 draw). There were 45,000 or so people in attendance, and the place was humming with energy. Such a fun game to watch: cheering, shouting, clapping, oohs and aahs, highs and lows, fresh-squeezed emotions. I do love live sporting events. While in Montreal, we wandered the neighbourhood, and found ice cream at a place with a banner that read: “Cremerie/Sushi.” 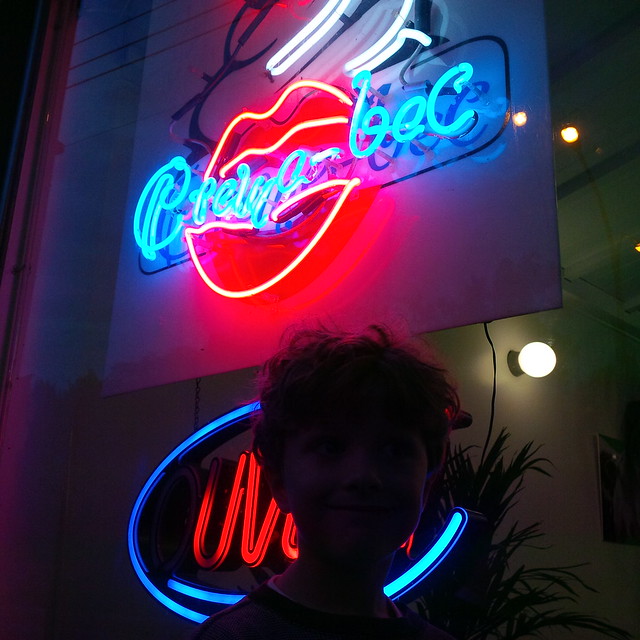 CJ at the Cremerie/Sushi spot

We rode the subway. Tried to walk to Mount Royal, but were defeated by a) the distance and b) more importantly, the whining about the distance. So we stopped for poutine instead. We found a bakery selling the most delicious Portuguese-style custard tarts, and visited a famous bagel shop. The kids swam, I went for a run in a beautiful park. It was a holiday. Everyone was so relaxed. 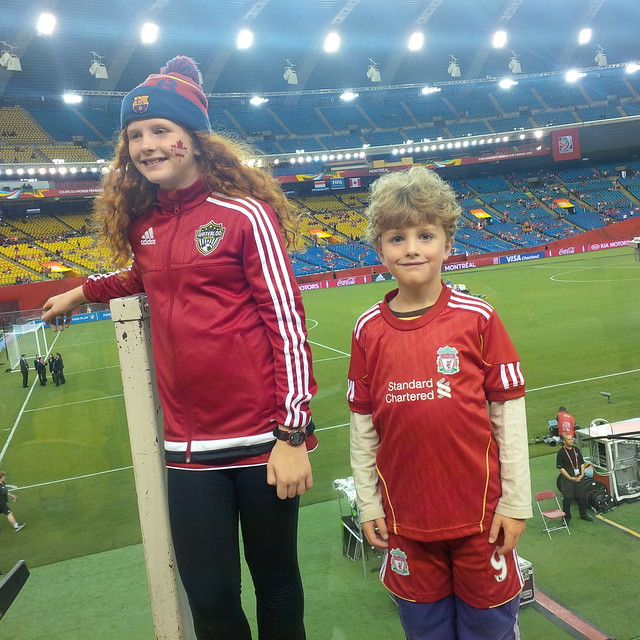 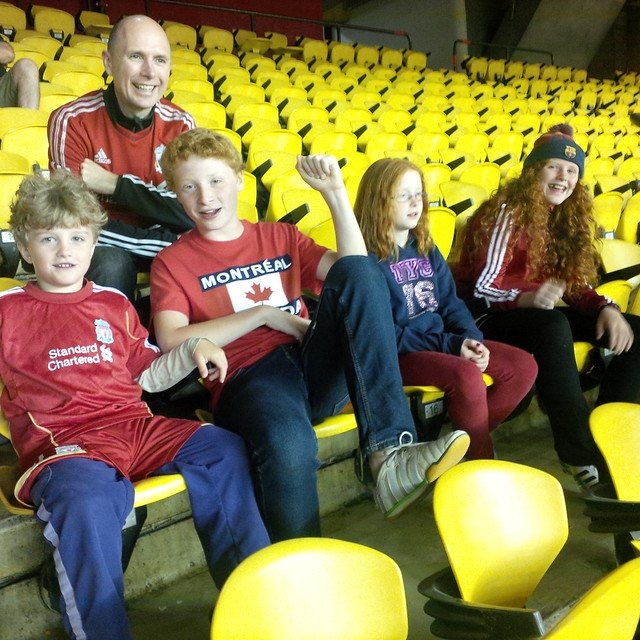 We arrived early. Very early. This makes it look like we were the only people in the stadium, but we were soon surrounded. In the excitement I forgot to take more photos. 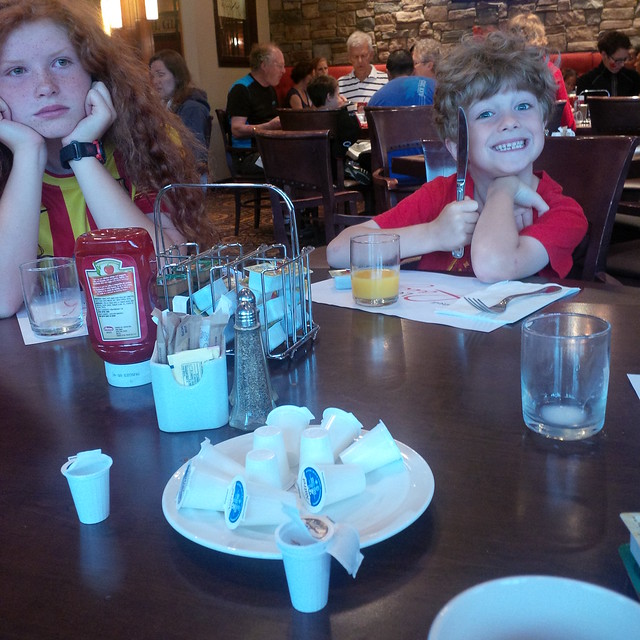 And now, home. But despite the sick kid nearby, and the immensity of the laundry pile, I feel that holiday feeling lingering. It was hard to get packed up and leave, but once we were gone, it was easier and easier to be away, to imagine ourselves somewhere else, leaving everything behind. Not that we would, and we’ve got a lot to come back to; just that it’s possible to imagine escape and adventure when you’ve removed yourself from the physical trappings of home. It’s a kind of wonderful feeling, I must admit.

A personal philosophy of time management
See the child