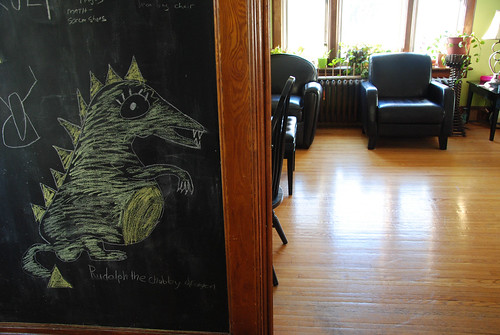 Some days I don’t have so much to say. Some days I’m teeming with ideas. Today is the former. I find myself a bit dazed and distant, wandering my treadmill (though I promised not to mention it). Maybe it was being awoken at 4:44 AM by a whining dog, and then submitting to the realization that I wasn’t fated to fall back asleep, given that my alarm was set for 5:05 AM. And the dog would not stop whining. Even after I took her outside.

I brought the dog inside. I drank a glass of water and brushed my teeth. I woke my daughter for swimming. I dressed and did yoga in the dark of the living-room. And then I went out for a run (-19C). It was a bit earlier than I usually go, and the streets seemed especially dark and empty. My eyelashes became bejewelled with droplets of ice. Cold seeped through my double and triple and quadruple layers. I ran as fast as I could, but I couldn’t run myself warm. I saw three people during my entire run, and a single vehicle passed me. The neighbourhood felt that emptied out, that silent, that blissfully asleep. And I was blissfully awake. I am a complete convert to the early morning.

Before kids and jobs, as a university student, my interior clock was switched around. I did my best work after midnight, and had difficulty rising in time to make my 11 o’clock classes. Maybe waking early is just another version of that devotion to the hours when most of the world is asleep. I think that’s what I love about being awake early. I love the quiet. The illusion of solitude. The sense of being a watchful eye on the sleeping houses.

My daughter was so happy when I picked her up at the pool, maybe for the same reasons, though I don’t know for sure.

I’m not saying it’s easy to set the alarm, or that it comes naturally, even now, after several years of practice. Oddly, it’s actually not. It’s actually something that I have to remind myself, almost every single time, will be worth it. If there’s a secret to discipline, it’s this: the first step is the hardest one to take. I forget this regularly, and learn it again, regularly, very often at 5 o’clock in the morning when my resistance is low and I’m somehow willing to stagger forth. The first step is the hardest.

Meditations on This Bright Abyss
It isn't meant to last