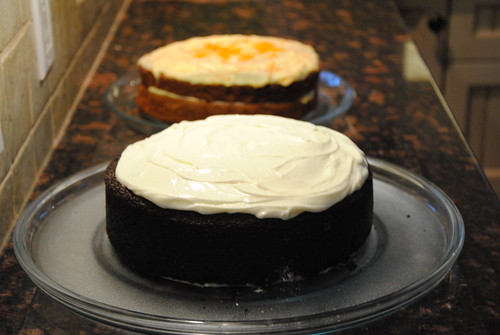 Please note: I have not personally attempted these recipes yet; these are recommendations from friends who have baked them. None involve a boxed mix. Come the next kid’s birthday party, I’ll be clicking this link in my virtual recipe box, and trying one of these out. If you try one too, let me know.

Yellow Butter Cake
{This is your basic not-chocolate cake for layering. I like it – it’s dense and yummy}

2 sticks (1 cup) unsalted butter, room temperature {No! DO NOT grease your pans with butter! I will explain at the end}
1 1/2 cups all-purpose flour, plus more for pans
1 1/2 cups cake flour (not self-rising) {you can use regular flour. The cake police won’t come to get you. It just won’t have as dense and crumbly a crumb}
1 Tbsp baking powder
1/2 tsp salt {optional}
1 3/4 cups sugar
4 large eggs
2 tsp vanilla extract
1 1/4 cups milk

Preheat the oven to 350. Grease two 9×2 inch round cake pans.* Into a medium bowl, sift together flours, baking powder, and salt.

In a separate bowl beat the butter and sugar until light and fluffy, 3 to 4 minutes, scraping down the sides of the bowl as needed. Beat in eggs, one at a time, then beat in vanilla. Add the flour mixture in three parts, alternating with the milk, beginning and ending with the flour; beat until combined after each addition. {me, I cheat. Half the dry, all the milk, other half of the dry}

Divide the batter between the prepared pans, and smooth. Bake, rotating the pans halfway through, 30 to 35 minutes. Transfer pans to wire rack to cool 20 minutes. Invert cakes onto the rack. Reinvert the cakes and let them cool completely, top sides up.

Ugly truth: I use shortening. That hydrogenated oil stuff we’re not supposed to eat because it’ll give us heart disease. It’s my only use for shortening – I don’t use it anywhere else but to grease pans. We’re talking about a teaspoon between two cake pans when I make a cake, so I figure I’m not poisoning my family. But it works like a dream for keeping cakes from sticking. When I use this, and then flour the pans, the cake comes right out. Every time. I have tried with butter and no parchment, and it was not pretty. Butter plus parchment works ok, but it’s more work, and I’m basically wasting paper.

{This is white because there are no egg yolks. Good day to make custard. Or tiramisu. Or lemon curd to go between the cake layers. Turn this into a layer cake by using two 9-inch cake pans, just follow baking directions above for times. You do need to separate eggs. But it only takes a minute, and then a few minutes to beat the egg whites, I promise!}

Preheat the oven to 350. Line two standard 12-cup muffin pans with paper liners. Into a medium bowl, sift together the flour, baking powder and salt.

In a separate bowl, beat the butter and 2 cups sugar until light and fluffy, 3 to 4 minutes, scraping down the sides of the bowl as needed. Beat in the vanilla. With mixer on low speed, add flour mixture in three parts, alternating with the milk and beginning and ending with the flour; beat until just combined.

In the clean bowl, beat egg whites on low speed until foamy. With mixer running, gradually add remaining 1/4 cup sugar; beat on high speed until stiff, glossy peaks form, about 4 minutes. Do not overbeat {I love this instruction. How are you supposed to know until it’s too late?! But do beat it a lot – makes for a fluffier cake.} Gently fold a third of the egg-white mixture into the butter-flour mixture until combined. Gently fold in the remaining whites.

Divide batter evenly among the muffin cups, filling each with a heaping 1/4 cup batter. Bake, rotating pans halfway through, 20 to 25 minutes. Transfer pans to wire rack. Invert cupcakes onto the rack; then reinvert and let them cool completely, top sides up.

{This one is a bonus. It doesn’t fit the easy party cake criterion, but it’s so delicious! Maybe when you have a little more time someday? (it’s not really *that* much longer than just a regular cake…) It’s meant to be baked in a bowl (so it’s a dome), but I think I just made it as a layer-cake in 9-inch pans. Anyway, take it or leave it, but it is my favourite white cake so far.}

Preheat the oven to 350. Generously butter the inside of a 10-inch stainless steel bowl (4 1/2 to 6 inches deep). Dust with flour, and tap out the excess; set aside.* Into a medium mixing bowl, sift together the flour, baking powder and 1/4 tsp salt.

In a separate bowl, beat butter, 2 cups sugar, and vanilla seeds on medium speed until light and fluffy, about 3 minutes, scraping down the sides of the bowl as needed. Add the flour mixture in 4 parts, alternating with the milk, and beginning and ending with the flour; beat until just combined.

In a clean bowl, beat the egg whites and the pinch of salt on high speed until soft peaks form. Add the remaining tablespoon of sugar, and continue to beat until medium-stiff peaks form, about 2 minutes. Whisk a third of the egg-white mixture into the butter-flour mixture to lighten, then use a rubber spatula to gently fold in remaining whites until just combined.

Pour the batter into the prepared bowl, and smooth the top. Bake, rotating bowl halfway through, until the cake is golden brown and a cake tester comes out clean, about 1 hour 40 minutes. If the cake begins to get too dark, cover loosely with aluminium foil) {if you’re baking in cake pans, just bake it about 30-40 minutes}. Transfer bowl to wire rack to cool for 30 minutes {20 for cake pans}. Invert cake onto the rack and let cool completely.

1. preheat oven to 325F
2. in a large bowl sift together first four ingredients (me, I just mix them together with a fork)
3. add everything except egg whites and cream of tartar, mix on low
4. in separate bowl, beat on high egg whites and cream of tartar until soft peaks
5. mix in about a third of the egg whites to rest
6. fold in remaining egg whites–don’t over mix
7. add to tube cake pan, bake for 75 minutes
8. when done, take out of oven and cool upside down over wine bottle

Marita’s Notes:
1. Because I am lazy and cheap, I use only two lemons. If I’m lucky, the rind is about right, if not, I don’t sweat it. I also measure the water and lemon juice together, adding the lemon juice of two lemons first to the measuring cup, with water to make up the rest. Sometimes, the lemon juice makes up most of the 1/2 cup. It doesn’t seem to affect anything but taste, being more lemony.
2. Don’t use butter. I had to last time and it tasted fine, but it didn’t rise enough and end up being only about half as tall as normal.
3. You could ice this, but I always just put whipped cream and strawberries on top.
4. Don’t grease pan otherwise it won’t rise properly and it will fall out when inverted to cool.

{I also make Apple Cake with Maple Walnut Cream Cheese Frosting every autumn, either for my birthday or for equinox. I put in dried cranberries instead of raisins and use whatever tart-ish apples I have on hand. The icing is amazing!}