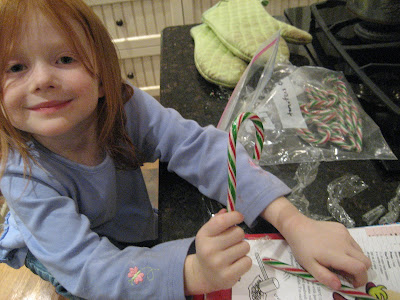 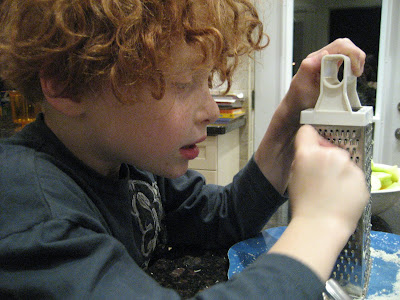 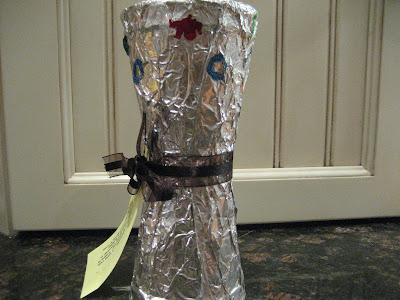 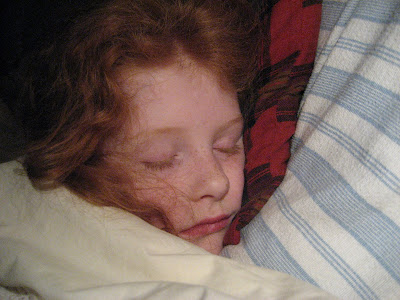 Today has been a kitchen day. I like kitchen days. I feel, mostly, competent in the kitchen. I feel free to experiment, to explore, to attempt. And I’ve got some devoted helpers, suddenly, too. Fooey’s been all over the kitchen ever since last weekend’s supper extravaganza. And I’ve been letting her help more, too. There’s more mess, but so be it. She helped last night making Christmas cookies, unwrapping candy canes and smashing them with a rolling pin, then sprinkling them into our stained-glass cookies. And she helped again this morning, following along with a children’s recipe, and reminding me at various points: “I can do this, because the little boy in the picture is doing it!” And she can.
:::
It was Albus’s turn to plan and make supper. He chose lasagna, and was agreeable about what went inside. “Meat and cheese,” he wanted, and agreed to chicken and roasted red peppers (both of which we had frozen in the freezer), and even though he’d never heard of ricotta, he went along with the suggestion. He set up “stations” at the counter. One station for resting and drinking water. Another for grating cheese. A third without a stool. He also spent a long time chopping veggies for a raw veggie platter, which I’ve served with great success on a couple of recent occasions. But only because I’ve been cheating and buying non-local sweet peppers and cucumbers which might be grown in greenhouses in Ontario, but are probably harvested by exploited migrant labour.
:::
Supper was dominated by Fooey and her kikombe cup, which she made at school and brought home with chocolates inside to share. This is what the label said, for those not familiar with the Kwanzaa celebration (like me): “This cup represents a kikombe – a unity cup used in the celebration of Kwanzaa. There is a wrapped goody for each family member in the cup. Pass the cup during the holiday celebration to symbolize your family’s unity.” We passed the cup as soon as Kevin got home from work on Wednesday (Fooey’s last day of school before the holiday). She’d barely managed to wait for him to get home, she was so excited about it. So, the cup obviously means something special to her, and it’s not just about the chocolate. Tonight, she asked me whether we could pass the cup and put chocolates in it. I said we could pass the cup and put cucumbers in it, as we were in the middle of supper. She thought that would make the cup messy (she was right), so she agreed to pass it with imaginary chocolates for everyone. But we didn’t follow her rules properly, and so every attempt to pass the cup was prematurely halted by a Fooey screech: “Nooooooo!!! Now we have to start again!” “Mmmm, my favourite chocolate candy,” was a verboten phrase, for example. This went on and on to the point of intense comedy, until we were all in stitches, even Fooey, who apparently could at least dimly grasp the absurdity of her demands. I’m not sure we ever successfully passed the cup. (Kevin and I both told the kids that neither of us had learned anything about the celebrations of other cultures and religions, when we’d gone to school. The kids were genuinely puzzled. “Hannukhah can be spelled at least seven different ways,” AppleApple informed us.)
:::
And there she is, moments ago, fallen asleep in our bed, where we let her read till Fooey falls asleep (they disagree about whether the door should be open or closed when falling off to sleep; plus AA likes to read at length before bed–where did she get that from?).
And if you haven’t guessed, yes, you are looking at a genuine Fooey-made replica of a kikombe, above.