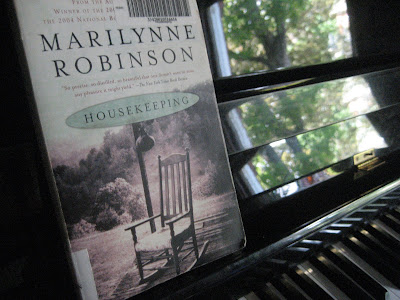 I mentioned this book in my last post; and finished it yesterday in what amounts, in my current life, to a marathon of uninterrupted reading, which in my pre-kids life would have added up to a walk across the parking lot. I used to read non-stop, everything and anything, and devoured multiple books each week; and will again when interruptions slow and cease. This is just a sweet taste of times to come. And what a book. The kids had listened to half a chapter on Saturday, and were bounding around impatiently as I ate up the last few pages, so I summed up the ending and then read them the final paragraph. Apple-Apple had tears in her eyes, as did I, though I hesitate to give anything away by summarizing what you might want to go and experience for yourself. Those final few sentences are so full of longing and loss, of the grief of separation, and tell of the ways we work so hard to keep ourselves sane and normal, our interior and exterior “housekeeping,” the order we invent communally and individually to protect ourselves from the wild uncontrollable arbitrary and mysterious forces that surround us, that will ultimately claim us, too.

The best part, for me, was talking with the children afterwards about these two sisters, who lived two such different lives, one transient and lost to the “ordinary” world, the other cleaving to it. Which sister would you rather be? I asked them, and Apple-Apple and Albus knew immediately they’d rather live the life of the ordinary sister, who likely grew to marry and have children and a house. But then Apple-Apple pushed her thinking further. She observed that if she were reading a book about someone, she’d rather it be about someone like the sister whose life was sadder and unusual. In essence, she understood the nature of fiction-writing/reading: that we end up writing/reading lives we wouldn’t want to live, in order to illuminate the lives we do.

Can I give you the final sentence? I don’t know whether it will have as much meaning out of context, but it’s so beautiful, it called out (to me) to be experienced again and again: “No one watching this woman smear her initials in the steam on her water glass with her first finger, or slip cellophane packets of oyster crackers into her handbag for the sea gulls, could know how her thoughts are thronged by our absence, or know how she does not watch, does not listen, does not wait, does not hope, and always for me and Silvie.” The power is in that final rhythmic chant-like repetition of phrases that in denying, finally, uphold. And always.

I am now left with that empty, lost feeling after finishing a truly extraordinary book. Hard to know where to go next. But it’s redeemed the novel for me, as a form to seek out and enjoy.

A Day Among Days
Last Day of School Photo Montage