A Day Among Days 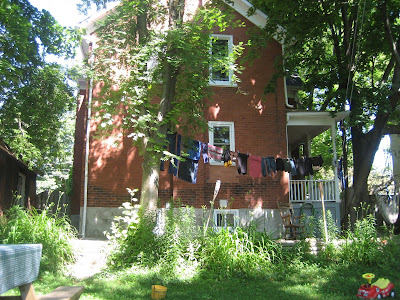 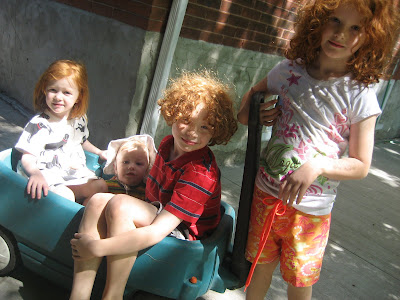 Too too late, but feel like recording a few of today’s really lovely moments. I was home alone with the kids, which is an odd way to spend a Saturday, and the day proceeded like all the days of this summer holiday will, if I’m a blessed and fortunate woman.
The backyard was where we spent all morning. Hammocks. I brought out a mid-morning snack of lemonade and popcorn, ran inside for something else, and when I came back out again, CJ had climbed himself into one of the lawn chairs with his sippy cup. At one point, three of the kids loaded themselves into the wagon and Apple-Apple pulled them around to their “house” (where I was the grandma, Fooey informed me). After lunch, CJ went down for his nap and I introduced the concept of The Siesta (they weren’t keen unless it involved “screen time,” a term I don’t recall ever using myself). Thanks for the siesta idea, Janis; this is going into my summer routine. I dozed and the kids played games, not of the video variety (“you’re the meanest mommy ever”): Bananagrams, Jr. Boggle, Rush Hour, Snakes and Ladders. Siesta hour ended with a book on the couch (a grownup book with no pictures); the sight of Mama prone and absorbed filled everyone with resentment, so on impulse I began reading it out to them. I’m reading Housekeeping by Marilynne Robinson, which is brilliant, dreamy, dense, complex, elliptical, with occasional terse dialogue, ie. not what one would imagine holding a child’s interest … but it did. All three gathered around in almost absolute silence to hear these quite astonishing words read aloud. The book was even better consumed in this way (though I don’t plan to torment Kevin by practicing this regularly before bedtime).
Quickly, before CJ woke, we made pizza dough, though I wasn’t as patient as I should have been with Fooey’s interminable stirring. I know other parents are better at this; I could be better, should be better. Lordy. I just wanted the darn dough stirred. Apple-Apple kneaded. She’s got a career as a baker (a baker, farmer, teacher, mother, dancer, writer, artist, I believe the current plan is). Beautiful dough, like silk. We left it to rise and headed out to the little park where we actually lay in the grass for awhile and made pictures out of clouds. Every cloud was a pirate device or weapon in Albus’s eyes. I will not let this trouble me. Nor was I troubled by the body part jokes that wended their way throughout our day. SIGH. When do these topics stop being so Highlarious? What was that? Never?? Darn, ’cause I seem to have outgrown them.
After supper, CJ discovered his own ears. He loves other people’s facial features and is thrilled to have them pointed out on himself, but this is the first he understood that he has two ears. Two of them! He pulled the tops out and perpendicular to his head, and with a huge grin of pure delighted discovery he ran through the obstacle course that is our living-room floor, ears in hands, to show his Daddy, home from work.
A brilliant moment in a solid, good day.
Hopscotch Cookie-Baking
A Good Book