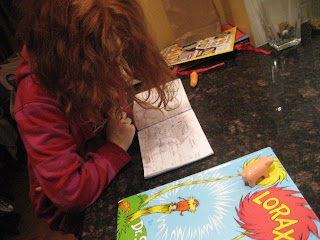 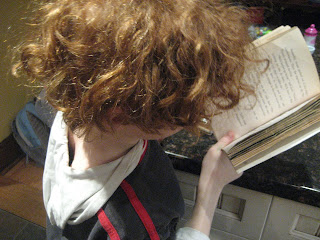 Reading has transformed our mornings and evenings. The two eldest children have graduated to chapter books, and are utterly drawn to the written word. Apple-Apple and Albus both read in bed, and it’s meant we can tuck them in earlier, while letting them stay up a bit later. And in the morning, Albus gets up early and snuggles in a blanket on the kitchen floor … with a book. (I should add that the kitchen floor is heated, and it’s his favourite place to read). The difference between an hour spent devouring a book, and an hour spent sedated before the television is quite remarkable. Television, while temporarily diverting, inevitably leads to “TV Brain,” as we call it: you know what I mean–that irritable, bored, restless state of mind and being. The kids raise their eyes from a book wanting to talk and share and describe.
That said, Fooey does watch television most every day, because I rely on that “quiet time.” But both Albus and Apple-Apple seem bored by it, and it is never be their first choice for an activity.
Grandma's Sugar Cookies
Local Food Rounder-Upper