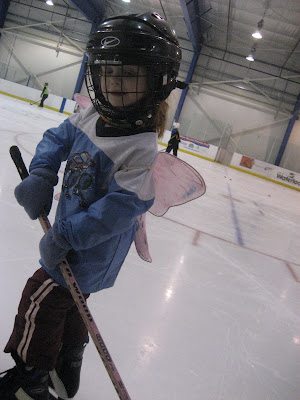 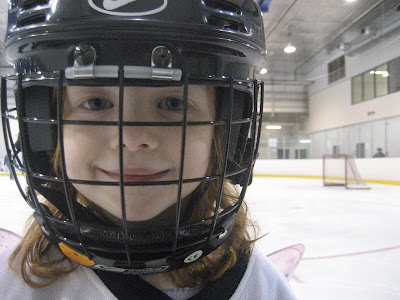 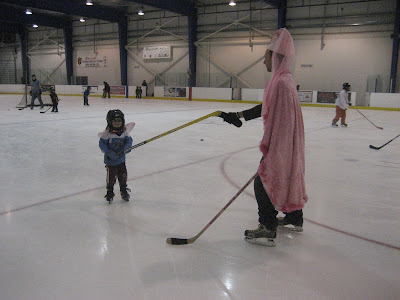 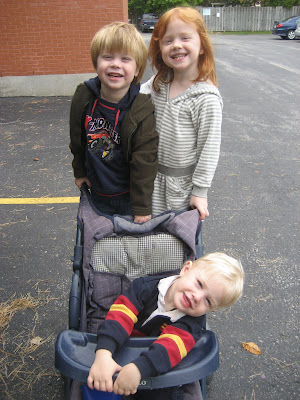 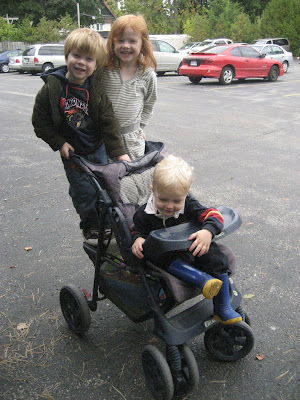 This is how we get to preschool. The extra child pictured is my occasional charge. I get a kick out of the way his hair lies almost precisely between Fooey’s and CJ’s, along the colour continuum. Fooey loves when he comes to play because he is fun (for example: they like to play a game in the backyard where they pretend to watch TV; taking turns changing the channel; his favourite involves racing cars), and because he will let her boss him around, most of the time.

Our discussion today, on the way to preschool, was about how long they could expect to ride around in strollers, and from the sounds of it, no one was eager to retire from the privilege anytime soon. Oh, before you know it, you’ll be walking everywhere, I assured them, and, nope, not us, they assured me.

My photos are loaded onto a different computer. I may add some in later, but will not let lack of illustration get in the way of a small update. With a life packed perhaps slightly too full, there seems no time to blog. And I miss it. It’s like journaling, which was something I used to do every day, by hand (unfortunately–of perhaps fortunately, depending on one’s perspective–those journals are essentially illegible, written in code, due to my “handwriting” which is a cross between cursive and print–an unsuccessful, take-it-behind-the-barn-and-shoot-it cross. Except I can’t because it’s all I’ve got).

Darn. Tangents always seem to happen in Blogland.
Here are some of the things currently filling my days …
Books: I’m writing a review for a former colleague at the Post, who is now publishing a magazine called Lake Simcoe Living; we’re rounding up some books to recommend for holiday giving and reading, and as such, I got to thumb through catalogues (not literally, because everything’s online now), make a shortlist, consult with her, then call publishers for review copies, which was something I used to do almost daily, but haven’t for years. Of course, all the publicists I used to talk to have moved on. But publicists are friendly; it’s their job. I’ve got two beautiful books already sitting at my elbow, waiting to be read and reviewed (that’s on my to-do list for this morning)–one of them I’m especially excited about: it’s called Earth to Table: Seasonal Recipes from an Organic Farm, by Jeff Crump and Bettina Schormann. The photos are gorgeous and make me want to fondle vegetables, and then cook them.
:::
Mark your calendars: I will be reading at the launch of The New Quarterly’s fall issue on October 22. That’s a Thursday. Which is the same evening that I also happen to have my first midterm. Seriously. Did I mention that I’m taking a women studies class? The professor thinks I’ll be finished in plenty of time. I’m excited about this class because I’m focussing my major paper on midwifery and doula’ing, and have already spoken to her about it. Yes, I’m a keener. Why the heck else would I be taking a class, if not to squeeze all potential learning out of it?
Tangent. Whoops.
October 22, Art Bar, which is in the Centre in the Square, in Kitchener. I’ll be reading around 8:45pm, but doors open much earlier. Details to follow.
:::
Kevin’s in Toronto running a slate of training classes, and this morning was HAIRY. I was a chicken with its head chopped off. Picture a cartoon Carrie suspended mid-air with legs and arms stretching in four different directions. And her head popping off. But we made it. And I enjoyed a brisk jog too. Which reminds me that I meant to blog about exercise. Am I fitting it into my life? I felt in better shape this summer with all the family biking we were doing. But I do bike to and from campus once a week, at a racing pace (why am I late, no matter where I’m going?). Biking after dark sure gets the heart pumping. I am covered with flashing red lights, but still feel only an invisible obstacle away from mangling myself. I also run home from school a couple of mornings a week. And I walk to school every day to pick up the kids (briskly on the way there, as, yes, I’ve started leaving later and later, because, really, why be early, when you can enjoy the adrenalin rush of not being sure you’ll quite make it in time?).
Does a joking tone translate in Blogland?
Stop typing. Stop typing, now. Time to work! 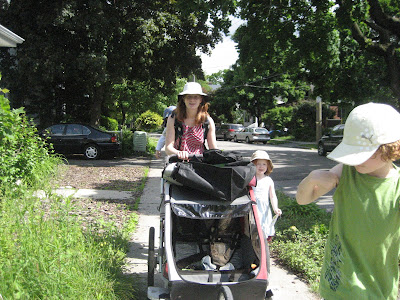 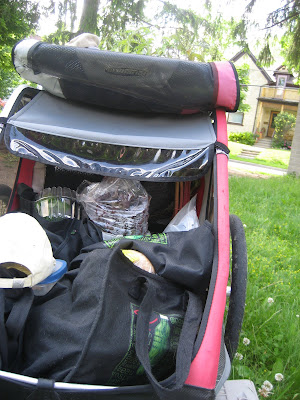 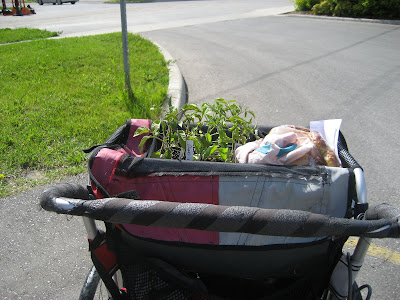 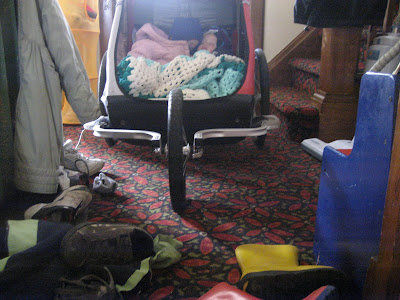 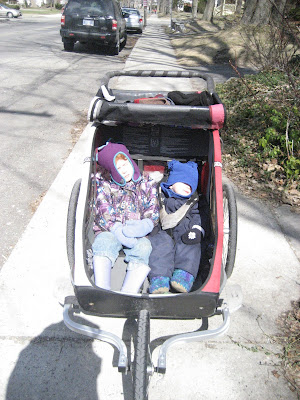 It’s my constant companion when out and about. It’s been in our lives since Apple-Apple was an infant; that’s longer than we’ve had our car or our house. I fill it with children, school bags, groceries, library books, cookie crumbs. It goes uphill and down, through rain and snow and sun, and requires nothing more than a jolly stride to operate. Someone took it off of our front porch in broad daylight this evening. It feels like someone’s stolen a part of our family’s history. That sounds silly … but those were our fresh cookie crumbs someone walked off with, and they won’t mean a thing to whoever’s taken it and is hawking it online right about now.
Thanks to our friends for their instant offers of stroller loans, especially to one who walked over a stroller less than an hour after we discovered ours was missing. I’m getting a little teary right now.

Just to say: Kev’s home, no surgery, leg splinted into place, and we’re figuring out his limitations and abilities. He’ll go back in a week for xrays and another consultation. The surgeon wasn’t keen to perform surgery under the smashed and splintered circumstances, but will leave it to nature to heal. After which, Kev will get rehab. Hey, at least finding a physio shouldn’t be a problem.

I ran the children to the walking school bus this morning. Of course, we were late. Sprinted would be more like it. We had to holler the last half-block to flag them down (stop! wait for us!). Fooey insisted on coming too (she’s experiencing irrational fear of her dad’s knee and crutches), but she couldn’t sprint quite as fast and trailed behind howling like a banshee. An A+ mothering moment.

Walk in the Snow

That photo of CJ looks so old now; well, he looks so young. Yet when I started this blog it wasn’t so far out of date. Time, time. I’m just back from a walk in the snow. Last winter I walked virtually every evening during the final three months of my pregnancy, and tonight was very reminscent. The snow falling, the pull to go outside, but not quite wanting to go to the bother, feeling tired, couch and snack calling. And yet. Trusting it would be worth the effort.

I often start my walks feeling resistant to the work, to the same old boring route; and without exception that sensation disappears by the top of the first hill. Without exception. Which prompted me to reflect, tonight, on that peculiar human truth– that so often our most rewarding activities are also the hardest to begin, to keep as routines, to follow through on. How much easier to pick up a magazine or newspaper than a book, for example.

And, also, how much easier to drive than to walk. Having spent part of this afternoon running errands in the family vehicle, crouched behind the wheel, muttering softly, I’m firmly in walking’s camp. Not to say the car isn’t occasionally my friend, and not to malign the wonders of a good old-fashioned road-trip; but happiness doesn’t come in car-form. Feet upon ground. Exposed to the surroundings. So, yah, it’s colder, damper, sometimes. Sometimes I choose not to go somewhere just because I can’t bear to bundle up my kids one more time for one more trip. But, then, I’m never in quite the same panicked hurry; probably because it’s impossible to panic and hurry, to floor the gas and cut people off, and therefore I usually leave myself enough time for error and last-minute bathroom emergencies. Usually, I said.