A hint about our day 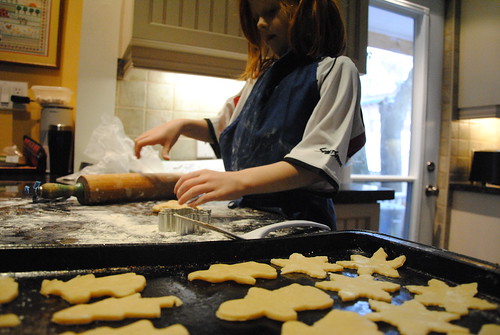 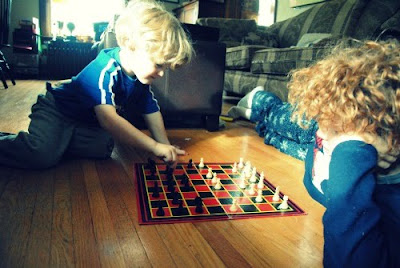 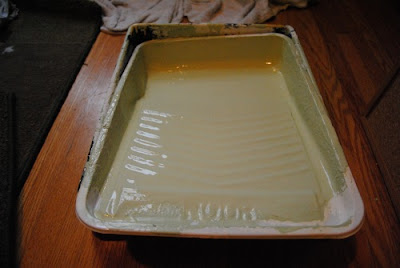 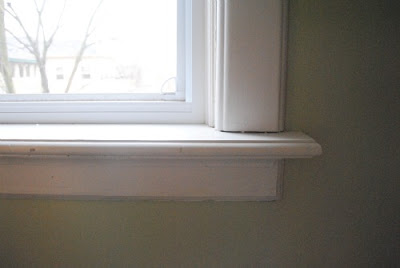 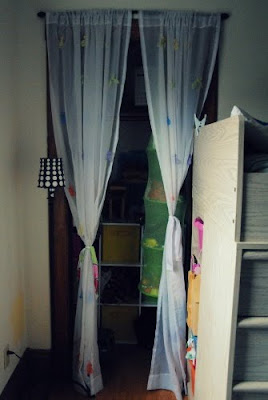 I’m not done yet!

But here’s our weekend in a few snapshots …

But also: Two rooms painted, lots of baking, and two piles in the kitchen organized into oblivion. I took a photo, but it wasn’t very impressive. Absence rarely is. Just the toaster and the kitchen counter. I also organized one junk drawer, cleaned three shelves in the refrigerator, and filled three bags with baby and maternity items (attic) to donate. It’s not everything, but it’s something.

Next up: Soccer practice and a run in the rainy dark.

And then: Supper? This week’s chalkboard schedule? Going through the kids’ school bags and starting a new pile? 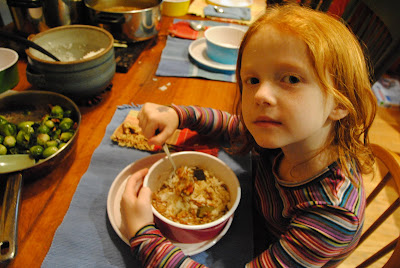 **Monday’s menu: Roasted salmon with teriyaki sauce. Steamed rice. Mashed sweet potatoes. Stir-fried napa cabbage.
**Original plan: Fish. Originally because I’d expected to serve supper to a friend who likes fish (or so I hear), but then plans changed, different friend came over, and the child who despises fish suppered elsewhere, therefore: fish. Remarkably like the original plan, just took a different route to get there.
**In the kitchen: Prepped and cooked immediately after school. Finished the napa cabbage with the juice of one lime. It was good. Ran out of time on the fish, left Kev in charge, drove a truckload of girls to theatre rehearsal.
**The reviews: Mostly good, but the stir-fry was under-appreciated by all the children.
**The verdict: Kev made leftover salmon into sandwiches for school lunches.
**Note to self: Do not gobble delicious dinner moments before going for a run. Or, optionally, cancel run in favour of gobbling delicious dinner. Just don’t try to do both. You will be sorry.

**Tuesday’s menu: Curried lentil-barley stew in crockpot. Bought falafels with pita and hummus.
**Original plan: I knew the crockpot would be involved, but devised no further plan. (This is bad, this lack of planning ahead. Like last week, I quick-jotted an ingredient list and I’m winging it.)
**In the kitchen: Started crockpot first thing in the morning. Smelled fabulous all day. While running errands, passed yummy Middle-Eastern cafe and stopped to buy a dozen fresh-made falafels and some hummus (the owners were having a shouting argument behind the counter while pausing periodically to smile at me, which was a bit unnerving, but hey. The food’s good). Consumption was casual. Kevin got home a few minutes before we burst in from swim lessons; he’d put together falafel sandwiches for himself and Albus, which the pair of them devoured before racing out the door to their first indoor soccer practice. The rest of us ate at a more leisurely pace.
**The reviews: “I don’t like falafel.” “Well, I like falafel, but I don’t feel like eating it right now.” “What it’s called, Mama? it’s a waffle? A fafafal?”
**The verdict: We’ll eat that stew tomorrow. No one touched it but me. And it’s yum.

**Wednesday’s menu: Pasta with pesto. Leftover sweet potatoes revived with cream, maple syrup, and pecans. Bread and cheese.
**Original plan: As above, more or less.
**In the kitchen: Made pasta post-piano lessons. Warmed up sweet potatoes. Toasted pecans. Used half a container of thawed (homemade) pesto, plus a whole whack of fresh-grated parmesan.
**The reviews: Everyone likes pasta with pesto.
**The verdict: Perfect for a quick supper.
**Random kitchen accomplishment: Made four litres of yogurt before breakfast this morning.

**Thursday’s menu: Soup! Squash/bean soup. Curried barley-lentil stew. Leftover rice. Brussel sprouts with pecans. Bread and cheese. (pictured above)
**Original plan: No plan. Needed to use up leftovers.
**In the kitchen: Warmed everything up after school. Spiced up squash/bean soup with cumin and lime (this was a combo of two leftovers languishing in the fridge).
**The reviews: Squash/bean soup surprisingly popular. I ate the stew. Apparently, I am the only one eating this stew. It’s starting to look like a lot of stew.
**The verdict: Not exactly inspired, but passable. Did not tempt me from my supper-hour run, let’s just say.

**Friday’s menu: Bailey’s pick-up, leftovers, and for me, poetry book club.
**Original plan: Where have my plans gone? Must get more organized next week.
**In the kitchen: I did nothing other than unload and store Bailey’s order, and fill a lunch bag with picnic items for soccer girl, who was busy all evening; I also packed an apple and egg for me, after my run.
**The reviews: Heard nothing, saw nothing. Post-soccer and running, I was out the door to my poetry book club where I filled up on snackie goodies (including something known colloquially as an “orgasmatron”). Plus wine, and happy conversation.
**The verdict: My standards sink pretty low by Friday. Good luck to us now that Friday pickups at Bailey’s are over.

**Weekend kitchen accomplishments: Buckwheat pancakes. Four loaves of bread. Three loaves of pumpkin bread. [pained aside: Is that all???? Why did it feel like I spent all of yesterday in the kitchen? Gah!!!!]

What got done this weekend? 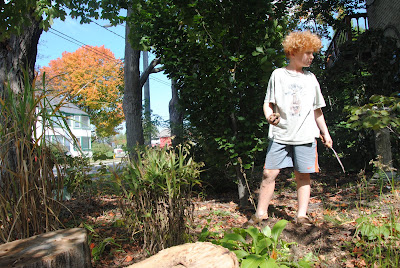 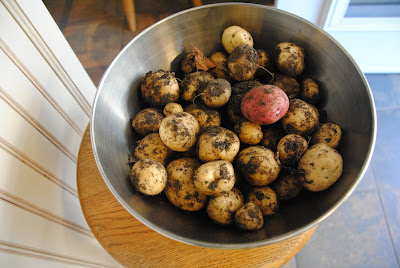 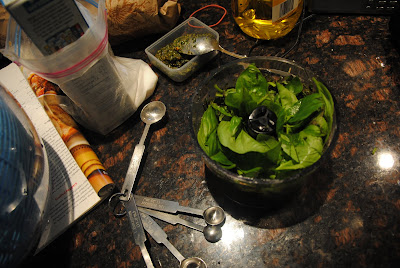 Kitchen drudgery: baked four loaves of bread; transformed shrivelled plums into a sauce; whirled and froze five meals’ worth of pesto; roasted and pureed tomatoes as a base for tomato soup and lasagna later this week; baked cookie squares with new baking soda (going on the theory that bad soda caused my treat fail last weekend).

Plus laundry. That’s what comes of having four children and a family involved in multiple sports activities. Also, I’m mildly obsessive compulsive about hanging it to dry. 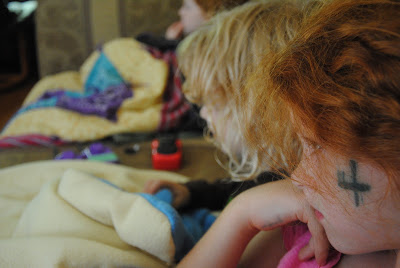 Soccer tryouts for this child, Saturday and Sunday morning. Lucky me, I got to take her and start both days with a long run on a beautiful autumn trail beside a river. 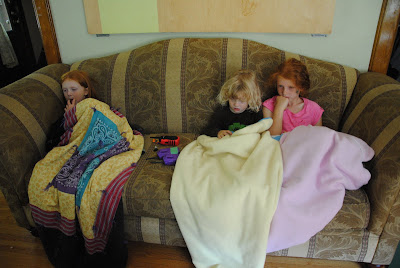 Vegging and movie-watching. These kids, both afternoons, the same (fairly awful) movie: Cats and Dogs. Plus Kevin and I got out on our own last night and saw a (fairly good) movie: Crazy Stupid Love. 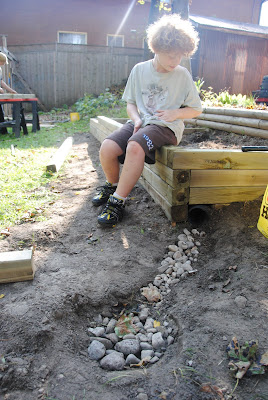 Work on the new garden beds for next spring.

Which leads us to the question: What didn’t get done this weekend?

Taking the kids to the Harry Potter matinee uptown today.

Signing up for a marathon in November. But I’ve got the registration window open on my browser, so maybe I’ll get up the guts to do it before the day is over. 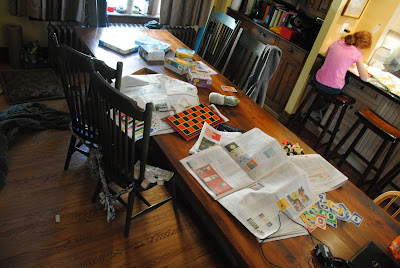 Cleaning and tidying. As you can see. (Are those MY socks on the table???? Oh crumbs, they are. Guess I can’t blame the kids for everything). 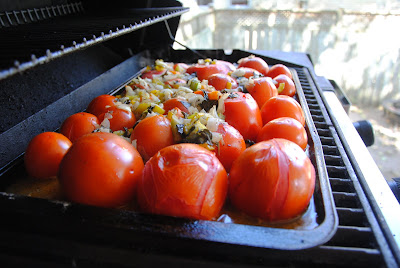 I can’t get enough of these photos 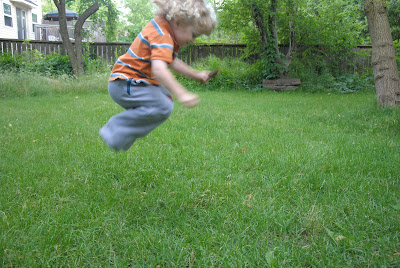 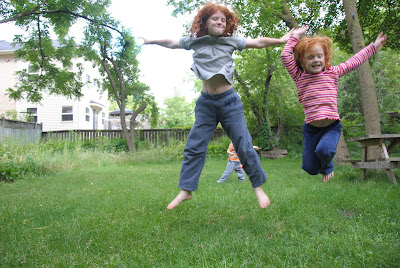 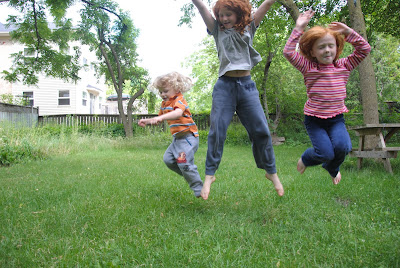 Yesterday, I got a taste of summer. A whiff. A tingle of this is summer. (See above).

Today, I am getting prepared. There are four more days of school, and then we shall hurtle headlong into the beach, overnight camp, strawberry picking, food preservation, swimming, and a multitude of mini-adventures … such is the hope.

So, I started today in the kitchen (can I return happily to the kitchen after losing all interest this past month? Well, I can try). I baked a batch of bread; didn’t take long, actually. I did dishes. The living-room is moderately tidy. Piles of papers have been sorted and recycled (more remain; and more are on their way home from school, no doubt).

AppleApple helped me make a giant (messy) poster of ideas for summer activities: our categories are Plans (dates for things we’ve already signed up for); Away (ie. zoo, beach, Children’s Museum); and At Home (ie. canning and freezing, making magazines/comics, playing with friends).

Kevin is in the middle of painting us a chalkboard wall: for messages, reminders, planning, and scribbles. Photos to come. (Inspired by this friend).

I am defrosting the freezers. One down, two to go.

And the kids have spent hours together in the backyard, even though it isn’t particularly warm or sunny out. The sidewalk is being chalked. A rung on the climber has been broken. The potatoes are thriving. Wouldn’t it be great to have a treehouse? A trampoline? Another tier of garden beds? Chickens? A dog? I’m looking around and seeing lots of potential.