We are living in a very particular moment 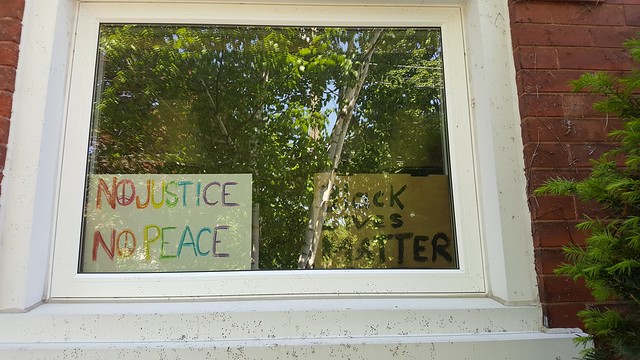 Today, I’m researching power structures in late-Elizabethan England, but I’m thinking about power-structures in 2020 North America, and especially, I’m thinking about self-expression. The freedom to think and express what is on your mind. The freedom to be yourself. What does that even mean? I think we’re getting a glimpse into what that means to people of colour living in white supremacist systems; and for those of us who have had the privilege of expressing ourselves freely no matter the circumstances (by and large), it’s a wake up call. I’ve been watching Amber Ruffin’s stories of her encounters with police, on Seth Meyer’s show this week. I want to shout: I can’t stand this! It’s not fair!

It’s not fair! Why did I think things had changed? I think I wanted to believe that in some way, we could all live as equals, especially here in Canada. Easy for me to think. I have white skin. So do my kids. I have never, not once, had an encounter with police where I thought: I might die. Listen to Amber’s stories. What struck me about the one I heard today, which I’ll try to embed below, is how the situation forced her to comply, even to agree with the cop who was threatening Amber on her own front porch—she had to agree, to comply, because it was the only safe thing to do. She couldn’t say: lady, you are lying. She had to swallow the lie.

Freedom of expression: erased. The ability to say what she was thinking: erased.

I get that as individuals we “police” ourselves all the time, we decide what’s safe to say or not say given the circumstances, and that there are legitimate reasons to self-censor, including to be polite, or not to hurt others. I get that. But this isn’t the same. It’s always chilled me to think about what happens to artists in countries where everyone is expected to think the same—or to pretend to. I’ve tried to imagine what I would do if I could not write freely. If every word I placed on the page had to be weighed, or coded, if I was forever compromising the truth of my own experience, hiding it from view. How would it change me? How would I survive self-negation? Well, guess what, Carrie, this is happening right now all around you. You just haven’t wanted to see it.

To be told who you are by someone else: happening now.

To be constrained by pre-judgement: happening now.

To alter your behaviour so as to survive: happening now.

I’m gonna quote Scott Woods’ blog post, titled “5 Things No One is Actually Saying about Ani Di Franco and Plantations,” written in 2014, which has been making the rounds, because he says all of this, and much more, much better than I can:

“The problem is that white people see racism as conscious hate, when racism is bigger than that. Racism is a complex system of social and political levers and pulleys set up generations ago to continue working on the behalf of whites at other people’s expense, whether whites know/like it or not. …

Here’s the deal with racism:

Racism is an insidious cultural disease. It is so insidious that it doesn’t care if you are a white person who likes black people; it’s still going to find a way to infect how you deal with people who don’t look like you. Yes, racism looks like hate, but hate is just one manifestation. Privilege is another. Access is another. Ignorance is another. Apathy is another. And so on. So while I agree with people who say no one is born racist, it remains a powerful system that we’re immediately born into. It’s like being born into air: you take it in as soon as you breathe. It’s not a cold that you can get over. There is no anti-racist certification class. It’s a set of socioeconomic traps and cultural values that are fired up every time we interact with the world. It is a thing you have to keep scooping out of the boat of your life to keep from drowning in it. I know it’s hard work, but it’s the price you pay for owning everything.”

We are living in a moment. It is a very particular moment. It’s not the same moment we thought we were living in, scarcely a week ago. Now it is another moment, replete with other images, some combined with where we were and still are (masks), and some brand new (protestors). 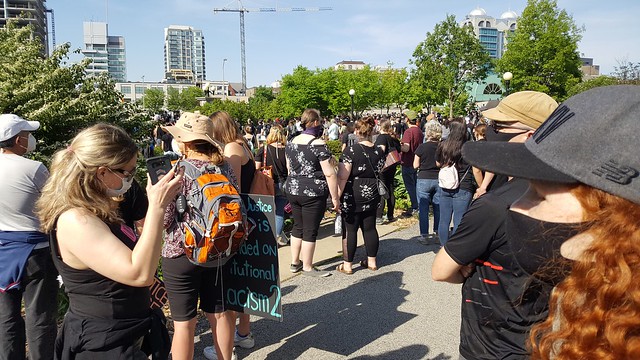 I decided, this week, to attend the protest organized by Black Lives Matters in my home community. I did so even though I’ve been faithfully quarantining and have scarcely left the house for the almost three months. (Yes, I wore a mask and so did almost everyone in attendance.) In Scott Woods’ list of the manifestations of racism, I see myself. I see my privilege, my access, my blindness, my errors. I know that I stick my foot in my mouth time and again due to my ignorance and that others have been generous enough to forgive me for this. I don’t claim to understand beyond my own life experience, despite living a life of imagination. I do not understand. But I can’t stand living like this—in ignorance, in a place where others living next to me are not free to move, speak, be, because of the colour of their skin. I refuse apathy.

When Trump held up the Bible, I recoiled. I’m Mennonite, and even though I have my own arguments with the Bible, the image looked utterly blasphemous to me. I thought: his understanding of the Bible is so superficial, he thinks it’s just a prop, used to intimidate, to confer power, to rally to violence. Oh, and he is right, because it has been used like that, and for that.

But for many of us, our relationship with the Bible is much more complex. Conflicted, maybe, yes, but we also know it as a comfort, with words that connect us with others who are seeking truth, who are suffering, struggling, who know Jesus as a shit-disturber, someone who sought to turn the power structure upside down, a healer who invited tax collectors and women to join the circle, who asked his followers to give everything away and come with him. Give everything away! I don’t think Trump has read that part.

But the truth is, even though I have, I haven’t given much away, let alone everything. I’ve sacrificed almost nothing, really. I’ve been assuming that goodwill and kindness would be enough to bring everyone along on equal terms, and holy shit, that is nowhere near enough. So I ask myself: What am I willing to give away? What am I willing to sacrifice, to challenge, to dismantle, to disrupt, am I willing to feel discomfort and get over myself, and get out of the way?

Discomfort. I think that’s step number one for me, and dammit, isn’t that a doable ask? Lord, grant me the humility to get comfortable feeling discomfort. Being challenged. Admitting when I’m wrong. Although the truth is, step number one has been GRIEF and RAGE.

Because this can’t go on. There’s too much at stake.