Biographical blurb: write your own 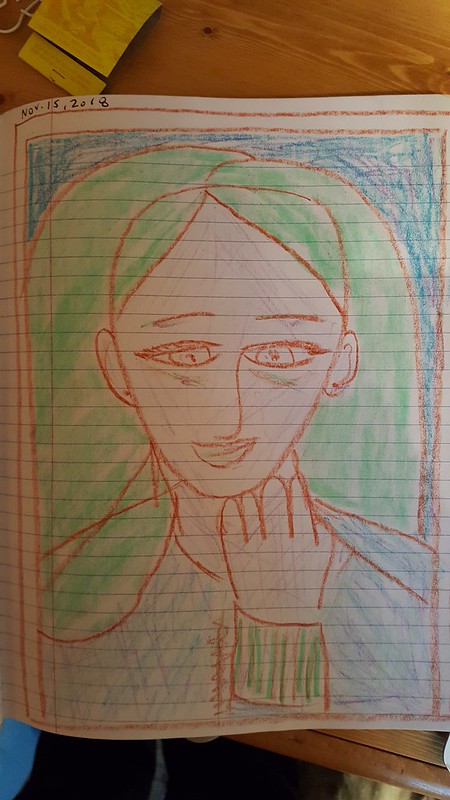 Who will you be in 25 years? This is an exercise I’ve done twice this fall, with different results each time. The first time, I was led through the exercise by someone else. Today, I led my students through the same exercise.

Here’s how to do it, if you want to try:

Draw a self-portrait as if you were posing for an author photo on the back of the book you’ve always dreamed of publishing. Use crayons. If you have a notebook, draw the portrait on the very last page. (10 minutes)

Next, write your author bio blurb. Remember to write in the third person. Cast yourself deep into the future (25 years or so), and discover who you imagine yourself to be. (10 minutes)

Here’s mine, from today. (Note: I draw self-portraits as if I were 25 years younger …)

Carrie Snyder has devoted her life — or the better part of it — to the pursuit of an ideal self that she first imagined into being as a seven-year-old child, when, as a reader of far-ranging taste with a wild imagination she said to herself (and to anyone who would listen): I’m going to do that too! I’m going to write books! While the perfection of her notion would prove impossible to achieve, the truth of its imagery was uncanny (she saw a forest path and a treehouse hideaway, which, as she grew, became representations rather than literal spaces). Through writing, Carrie found herself transported, frequently, into a deeper understanding of her relationship to the world itself and to its many mysteries. She came to a kind of peace with its mysteries, by holding them to the light and examining their facets with care and attention — and love. Love figures heavily in Carrie’s work, specifically in her discipline to craft, and to sharing the joy of a discipline with others. She has not yet finished, and she hopes she never will. What has changed, with time, is her understanding that finishing something is temporary, and that what lasts is the pull of discovery itself. The process. The adventure of it. She will never be satisfied nor think her work on earth complete, and that is the fuel that invites her to continue — to be the ideal self she imagined at age seven: an artist. Someone who by alchemy transforms the ordinary into the extraordinary. Someone who sees what is possible. Someone who looks at the world and loves it with her attention.

Here is the original exercise, completed in October, with a different result (except for the youthful portrait). 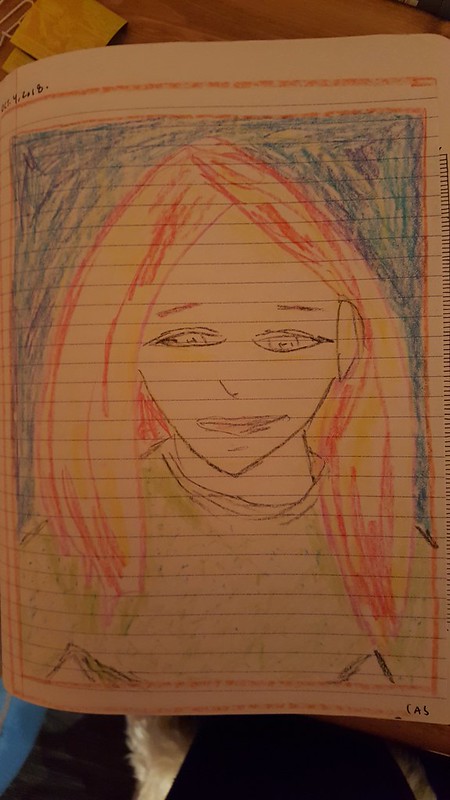 Carrie Snyder, despite crippling bouts of self-doubt, has managed to put herself forward, into positions of service, of leadership, roles that demanded the ability to see herself as more powerful and more capable than anyone else did, and by believing, to become. She was not always confident. Was not always the presence she presented. At times, she thought she was doubled, the face to the world not the face she turned to herself. Was it possible to live doubled like this? What did it mean to do work that challenged and frightened her to her very core — could she get up the next day and rise again? But something deep inside ran like an engine or furnace, the flame of desire, the flame of meaning, and she knew she could live in no other way — could she? She tried listening to reason, to her heart, to her spirit, but the fire was the constant that gave her life, renewed her desire to inhabit bodies and minds bigger and braver than her natural own. She said: If I can do it, then I will. She said: Be the change you want to see. And she was. And that was marvellous to her. Because if she could do this, anyone could — anyone loved and believed in and cherished. Carrie Snyder cherishes herself, believes in herself, loves herself and that has made her strong enough to love, believe in and cherish each of you —

each of you — beautiful, aching beings

PS It’s tempting, when presented with two things, to compare them … but let’s not. I like that both of these projections into the future are, in fact, deeply embedded in the emotional reality of a present moment. Like putting a thumb-tack onto a map to say: I was here.

I want to write about clearing space
What would you change if you could?