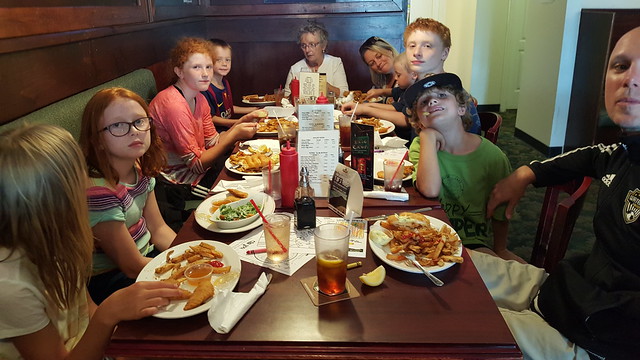 I have no voice.

After writing my previous post, I promptly got sick and spent most of last week shivering on the couch, feverish and dizzy. I dragged myself off the couch to coach a soccer game on Tuesday evening, heavily dosed with Tylenol. I’d recovered enough by Friday to embark on our trip to Kingston, with a detour to Sauble Beach to pick up CJ at camp. Kevin and I drove separately; he spent the weekend with AppleApple’s team, and I spent the weekend with Fooey’s team — same tournament, two different teams. Thankfully, we played at the same field, so we could spend Saturday near each other. The boys stayed with their grandma. It felt like we were all dispersed. One of my happiest moments of the weekend was during game two, when I looked across the field and saw a whole bunch of redheads watching from the sidelines: it is the only time everyone has come to see Fooey’s and my team play. Everyone got to see AppleApple play the following afternoon, when her team made it to the semi-finals.

Coaching was fun. I still had a voice, and I was feeling much better. The girls started the day slowly, but played a solid second game, and by game three they were firing on all cylinders. It was exciting to see the team play up to their potential. They played like I’ve imagined they could, with intensity and togetherness, and skill. It was thrilling.

We ended the day with a swim and a pizza party, and some late night goofing around at the hotel.

I woke up on Sunday with laryngitis. I could still speak raspily enough to be understood. But after another long day that included a family brunch, supervising five children (we had an extra child on the trip with us), three more soccer games, dinner out at a pub to watch the Euro Cup final (photo above), and a five hour drive home (many pee stops), my voice was done.

I woke up yesterday with nothing. A whisper.

I shouldn’t even be whispering, as it’s hard on the voice and will slow recovery.

What I’ve been reading

What I’ve been watching (too many to list, so here are just a few)

Scenes from the annual burning of the homework
Grey day