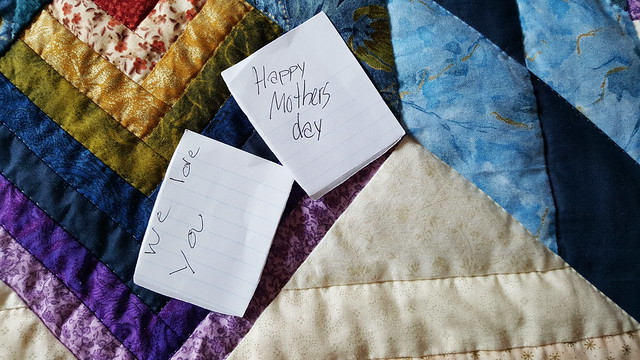 Last Sunday, I posted this photo along with the following caption on Facebook: I have been given these two notes and told to wait in my bedroom while the gifts are being hidden. Meanwhile in the bedroom across the hall, the eldest child is still asleep; and down the highway, the second eldest child is playing a soccer game in Oshawa. I’ve already walked the dogs, fed a neighbour’s cat and planned today’s soccer practice, and I’m wearing running gear in hopes that it will inspire me to go for a slog/run in the sunshine later this morning. What are you doing for mother’s day?

Here’s what happened next:

Daughter opens bedroom door, hands me a note, which instructs me to look for a remote control toy car in the bedroom she shares with her brother (oh yeah, we mixed up the bedroom configuration again: the two eldest get their own rooms, and the two youngest are sharing; I agreed because they came to the solution together and everyone agreed).

Anyway… I walk to bedroom, find remote control car, which has note affixed to it: Follow me!

Son proudly but silently picks up remote control car and heads to the front stairs.

Daughter: (admonishing tone) Those are the wrong stairs!

Son looks confused, drops remote control car, car tumbles as if in slow motions down to the bottom of the wrong stairs, breaking into pieces as it goes. Moment of shocked silence.

Daughter: (to her brother) You’ve ruined everything!

Me: Can I help you look?

Daughter: This was his idea!

Son: (silently trying to get remote control car to work)

Daughter: We should go with Plan B! That’s my plan! Not his plan!

Daughter: (retreats to nearby room where the secret surprise is waiting) It doesn’t matter anymore. Everything’s ruined.

Me: (quietly to son) What was Plan B?

Son: (whispers) I don’t know, but I think we were going to use string.

Me: (louder to daughter) Should we come down the other stairs instead?

On the table is a jar of freshly picked tiny spring wildflowers from our backyard, and a paper bag with a gift that son has carefully carried home from school on Friday. It is a clay bowl, the fourth one I’ve now received for Mother’s Day. Apparently there is a kiln at school, in the basement, it is reported to me. The clay bowl is full of notes detailing all the things I can now get for free: 1 free help clearing the table, 1 free walk the dogs, etc.

Me: But this is lovely! (sits down)

Daughter: (bursts into tears) I don’t even have a gift for you! Because I wasn’t in school on Friday! [she was sick] And then he had to do his plan.

Me: But you picked these flowers! And these notes are from you, aren’t they? Or is your brother supposed to give me all this free stuff by himself? (joking tone)

Daughter: (wiping tears) No, they’re from me too.

Me: All I really want for Mother’s Day is to see you having fun together, and it sounded like you had so much fun planning this….

Son: (a bit miffed) You already have four of those clay pots?

Me: (shouldn’t have mentioned it) Now I have four. I only had three before. (pause) I guess this will be my last clay pot.

So … the construction of the above scene may give you a hint as to what I’m working on now, perhaps foolishly, definitely without provocation. I just want to do it! I’m writing a play. It is not a play about Mother’s Day, it is not autobiographical, and I have no idea what will happen when I’m done writing it (assuming it’s any good), because a play is meant to be seen and performed, not read like a book. And what do I know about that?

In unrelated news that my brain wants to make related, the Canada Council has just announced a juicy one-time grant in celebration of Canada turning 150 next year. The grant is called the New Chapter. I would love to figure out how to participate by pitching a project that would “encourage public engagement in the arts” and “promote outreach locally, nationally, and internationally.” (Not sure I entirely get what that second clause means in practical terms.) I want to be a visionary, but my strength is doing stuff, not making stuff happen, not pulling together a bunch of disparate pieces and spinning them into something like the amazing Terres des Paroles arts festival I participated in while in France (which would be an example, to my mind, of what a New Chapter grant could and should be used for here in Canada) … where X artist from discipline A works with Y artist from discipline B: i.e.  writers and actors collaborate to create performance pieces in small Canadian museums; or actors perform readings from books; and it all happens in small towns.

Is anyone out there applying for this grant? I’m curious to know whether artists even know about it. It sounds like an opportunity for collaboration. And just thinking about it makes me feel a little bit lonely and disconnected, in all honesty. I can’t seem to imagine who, what, where, when, and most of all how …