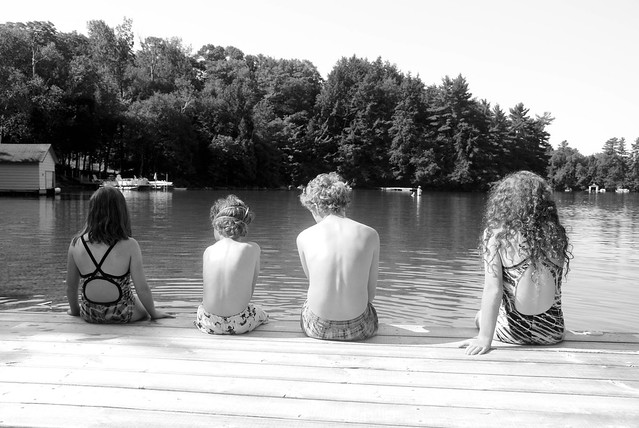 A wall of green hides me, hangs over me, stands before me. I am hidden from the people walking by on the sidewalk, but they are hidden from me too; I have to duck my head, crane my neck, follow their movements deliberately. An old man on a bicycle, pedalling vigorously, upright, with a wicker basket on his handles and a sunhat, and sunglasses. A student carrying grocery bags in each hand, heavy, his backpack loaded and heavy on his shoulders too. Cars are a steady stream, accelerating and slowing, accelerating and slowing, their engines grumbling, whining, squeaking, roaring.

A white butterfly darts through the bright green branches of the lilac, which leans into the porch before me. A car waits to turn the corner, blaring top forty pop: I recognize this song but can’t name it.

A woman walks by with her crying baby strapped to her chest, pushing an empty buggy—a fancy big-wheeled buggy like Princess Charlotte would be pushed in, which looks impractical. An SUV knocks a construction sign set in the street near our house and the vehicle sounds like it’s losing a part from its undercarriage.

“No you’re not. You are being punished. You don’t get what you want.” The woman in a floral print shirt, brown khakis and sandals speaks to a small child whose hand she is holding. The woman is so much larger than the child that I see nothing except for his or her shoes, pink sneakers. They are already gone and out of sight. Her voice was loud, irritated. I’m sure I’ve spoken to my own children with such loudness and irritation at times, although one rather wishes not to do so, especially in public. It depends on the day one is having. It depends on the patience already drawn upon, how deep the well. You don’t know, you haven’t been with us all day, you don’t know how many times I’ve kept my temper—sometimes I would think this as I would hear myself speaking with irritation to a truculent child.

But my memories are rose-tinted now, and I can hardly remember children being truculent or me being irritated, I only remember the luxurious pace of our hours, pushing a stroller with a child on a tricycle before me, pushing her along with the front of the stroller, slowly slowly progressing home from the library. Caroline Street was so hot in the summer. We would look for the pool of shade under the lone mulberry tree. I wasn’t sure the children should eat the berries that fell from the tree: “We can look it up when we get home, so we know for next time.”

A man drives by in a silver sedan, both hands on the steering wheel, a cigarette on his lower lip, his mouth open, big black headphones over his ears, sunglasses over his eyes. Why does his image stick in my head after he’s flashed past?

The leaves of the lilac are enormous, very bright where the sun strikes them. Ivy clings to the roof of the porch. By summer’s end it may trail across the roof and along the bricks by the front door. I love the way it hangs, green leaves cascading from thin brown vines.

A wall of green. The birch tree with leaves hanging heavy. The young maple tree in the front lawn beyond ours. The dark green of a coniferous bush by our front window. Green grass and clover in our yard, and a green and white hosta with tall searching stems atop which white flowers may bloom, soon.

The porch boards are grey, and dirty. They should be swept.

I haven’t cleaned anything in a very long time.

A pair walks by on the opposite side of the street, boy and girl, the boy has a full-sleeve tattoo, which seems almost ordinary these days, if I may say so without sounding elderly, and I suppose that I can’t. Kids these days … The pair walks in perfect lock-step, though I doubt they know it. Step, step, step, their legs scissoring together and apart in perfect rhythm with each other.

The hum of insects rises, falls way. I wonder why it rises. I wonder why it falls. A child is shouting and running, a very small child in a yellow t-shirt, running with his arms pumping strongly, shouting words I don’t understand. He stops and walks. His mom and dad walk behind him, and he waits for them to catch up. “Ryan, you want Brother to move out?” “Just till my birthday, and then he’ll come back …” Maybe they aren’t mother and father after all. I can’t make sense of their conversation. They are past me. No one stops on the sidewalk and finishes their thought for my benefit.

Would these strangers mind if they knew I were writing about them?

Why do people accelerate their cars so enormously when they can see a stop sign coming up ahead? Isn’t it a waste of energy? Delusional, almost? Thinking they can get themselves to their destination faster if only they press the pedal to the floor between stop signs and turns? Do I do the same thing?

A man carries a cellophane bag of washed baby spinach in one hand, a cup of take-out coffee in the other, rubber sandals, white t-shirt, brown khaki shorts, and sunglasses on his head. He looks peeved, but I think that is just the expression he carries between his eyes, the crinkle, because of the sun. Why doesn’t he put on his sunglasses?

A woman with dark skin and long curly hair also wears her sunglasses on her head. She is staring at her phone and walking briskly, head inclined downward, dressed all in black, black pants, black tank top, black glasses, black phone. She treats the phone as if it were part of her hand. She is not thinking about walking down this sidewalk, she is somewhere else, thinking abut something else, somebody else. Smiling, the edges of her lips lightly upturned.

This is not a story. It has no end.