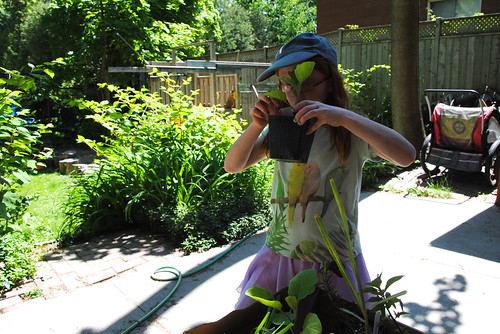 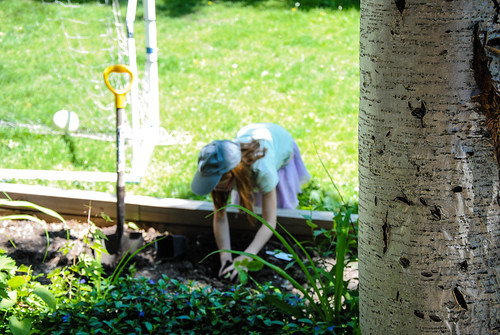 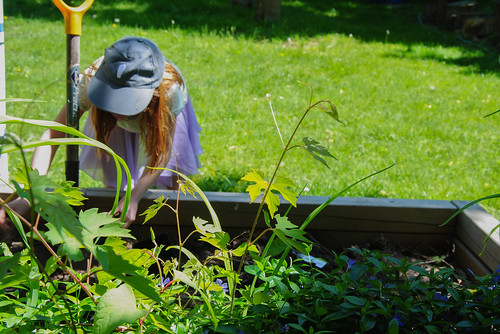 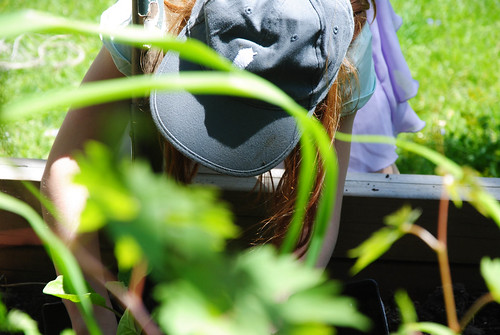 We don’t always have a ton of luck with the vegetables we plant in our raised beds, but every spring we give it another go. One year we scored with a broccoli plant that was still producing in November, but that never happened again. Cherry tomatoes work best, and herbs grow well, but any squash or zucchini that’s sprung forth has been quickly gnawed by our ravenous population of squirrels, which even the dogs can’t keep away all the time, though they relish the battle.

Fooey brought home a very healthy bean plant from school, which she planted with the beans that we’d started for AppleApple’s science fair project. Fooey’s teacher told her she had a green thumb, and it seemed that Fooey took that idea to heart. She’s planting two eggplants in the photos above. Good luck, eggplants! And beans! (I’m already stir-frying you in my imagination.)

This morning I am more tired than I’d like to be, and perhaps slightly more emotional too. I’m in the kind of mood where I’m practically weeping over a story in the newspaper (this one — about a kindergarten teacher in Toronto, who died tragically young). I’m hoping no one turns up at the door. I love stories about people who live outside the box. And I love stories about people who care deeply for the well-being and dignity of children; my son’s kindergarten teachers are amazing, and we’re constantly impressed at the ambitious yet simple events and outings being planned on the kids’ behalf. Life is so much richer when it’s blessed by people who care. 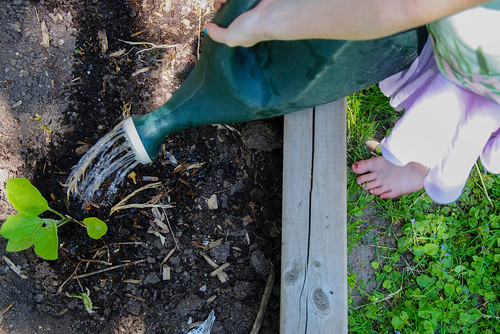 I’ve been to Toronto and back two days in a row, contributing to the tiredness of today.

Last night, I went in for the National Magazine Awards gala, and did not win in my category (the prize went to Liz Windhorst Harmer, who was radiant in her excitement). I went mostly to be a fly on the wall, having never been before, and to celebrate the career of Kim Jernigan of The New Quarterly, who was being honoured with a special prize. It was an odd experience, made pleasant by the company; but in truth I’m not sure I entirely understand award galas. I understand the value of awards themselves, to those whose careers are lifted by recognition, but I don’t understand the gala part. These must be expensive to produce, and as a writer, were I to win an award, I’d much prefer a cheque to a flashy ceremony. This is probably an heretical opinion to express, and I will now be karmically banned from ever being nominated ever again, but I guess I would wish for a celebration of writing to be more, well, celebratory, less American Idol, less winner v losers. What is our mania for making winners and losers out of individual creative efforts? I can honestly say that being nominated was a gift and a complete surprise, but that “losing” last night had an equally surprising effect of making me feel, well, like a loser, at least temporarily. That may say more about me than it does about award ceremonies, but it did get me thinking about the double-edged sword of recognition. One wants recognition, as a writer, and if one wants a viable career, one may in fact need it, but it comes at a cost we’re not so willing to discuss, attached as it is to corrosive emotions of envy and greed. Shake hands with the devil.

I can think of only one response to counteract corrosive emotions: get grounded.

Like Fooey’s doing in the photos above: Get into the earth. Dig in. Get dirty. Plant. Hope for harvest.