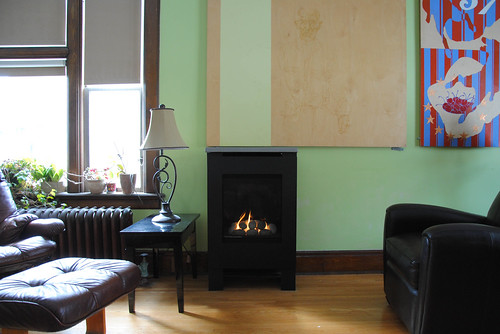 We’ve added an element to the house: FIRE. It’s a gas stove, not wood-burning, placed in the centre of the wall in our main room. I’m sitting in front of it as I type, with my feet up (sorry, treadmill desk; I’m cheating on you with my new flame). As you can see from the photo below, this room remains a long-term work in progress. Kevin and I have two plans, one a total dream and the other something we could hack together ourselves with some help from Ikea. The latter is likely the route we’ll take… when we get a spare moment. Meanwhile, the room looks like this: I read to the kids in front of the fire last night, snuggling up for the first chapter of Farmer Boy, which CJ had strongly objected to reading (but I can’t read any more Calvin & Hobbes comics, which he loves but totally doesn’t get, requiring a lot of difficult explication). After some stomping around, and “I’m not listening to that,” he came around to “Fine!” when he realized what he’d be missing out on — namely the snuggling in front of the fire.

Farmer Boy begins with children walking through deep wintry snow to a schoolhouse that seems remarkably lawless and dangerous, the scene of potential violence and humiliation where big boys want to “thrash” the teacher and the teacher is considered especially kind because, unlike previous teachers, he does not beat a little boy for not knowing how to spell. The Wilder children are close in age to our family: Royal is 13, Eliza Jane is 12, Alice is 10, and Almanzo is 8. Almanzo, the littlest, has to carry the dinner pail (CJ, the littlest: “That’s not fair!”). By chapter’s end, CJ was hooked. Here’s what the Wilder children found in their dinner pail: bread and butter and sausage, donuts and apples, and one big flaky apple turnover each. (CJ: “Do they only have one nutrition break?” Me: “Yes, but they call it dinner, not nutrition break.”)

We only read one chapter, but it took ages; the conversation around the story could have gone on and on. The little kids were tucked into bed quite late, and Kevin left for hockey. When I came downstairs, the big kids were so perky and happy and chatty that I couldn’t send them to bed. It was the fire. We just couldn’t help but gather and linger and talk … about everything and anything. I learned more about Albus’s school day than I’ve heard all year. They wanted to know what school subjects I was bad at (domestic science and art), and what I looked like in grade 7 (plain and unfashionable: I mostly wore my hair in braids), and I could see them wondering, would I have liked Mom? I’m pretty sure I wouldn’t have been cool enough for Albus. But I grew up so differently from them: never staying in the same place for more than a few years, often the new kid at school, shifting between countries and cultures. By age 12, I’d lived in four different countries, and moved approximately 10 times. The life I’m offering to my children is a settled one, rooted, with privileges that they take for granted, and that I remember not even bothering to envy as a child, because they weren’t things I wanted or needed. Swim lessons, sports teams, fancy gadgets and the “right” shoes and clothes. I was a clueless 12-year-old: dreaming about getting a pony. At the end of grade seven, we moved to a farm and I got a pony! I never felt deprived.

It’s funny how we want to give our kids the things we didn’t get (i.e. swim lessons); but also give them the things we valued from our childhood. I valued my freedom to explore, and I valued being an outsider. It gave me a special status, a special vantage point from which to observe. My kids aren’t getting those things; they’re getting rides to soccer fields instead, and new jeans. What terrifies me is raising entitled kids. I struggle constantly not to do too much for them, to ask them to pitch in for the benefit of the family (and not to earn an allowance, another perk they have, which I did not grow up with). I want them to do the right thing; but more importantly, I want them to choose to do the right thing, not be forced or punished into doing it. You know? I want their inner fires stoked. So here’s my slow-burning hope. Gathering, talking, sharing, instilling values (one hopes), connecting, laughing: these years go by so fast. Last night, I let the kids stay up late. It seemed like a rare occasion, but I hope it happens often, now that we have something to gather around, something warm and ever-changing and comforting.

Imagine your way to success
The truth stays the same