The truth stays the same 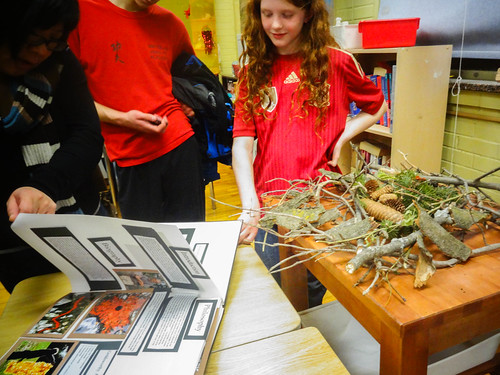 Can an evening be both packed and relaxed?

After piano lessons yesterday, Kevin and I tag-teamed supper prep: chicken fajitas with leftover refried beans and accoutrements from Taco Farm (radish salsa, pickled jalepenos, cabbage crudito). We were all home to eat together. 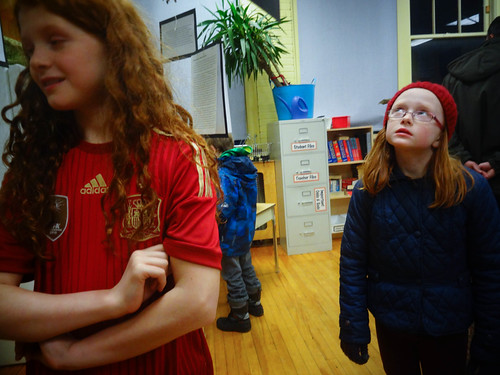 I left Kevin with the cleanup, and the girls and I headed off to AppleApple’s open house, where the students had set up displays on their arts projects. (They do a project on social studies in the fall, arts in the winter, and a science project in the spring.) Among the topics were cake-decorating (with slices on offer), magic, opera singing (the student composed and performed her own aria), and radio drama. AppleApple’s scrapbook on Land Art was well-written, beautifully illustrated, and seemed to be well-received; I observed two dads reading her text and commenting on the fascinating strangeness of Andy Goldsworthy’s art. It struck a chord. 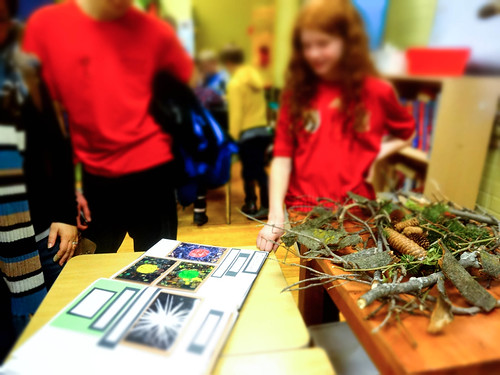 After some cake, Fooey and I left AppleApple to mingle with her friends, and we headed off to gymnastics, picking up a carpooling friend on the way. In the quiet car, on the way back to the open house, I caught part of a well-produced profile of Buffy Sainte-Marie. Almost the first thing I heard her say was (and I paraphrase): “I’ve travelled all over, and the lies are always different, but the truth stays the same.” She was saying that the universal truths that resonate between cultures and times don’t change; it’s the lies that are shifty. So speak your truth, people. That’s what I took, anyway. She also reflected on her parentage, saying she was sure she wasn’t pure Cree, but had some European blood in her, somewhere along the line. She put it like this: “It was either an act of war or an act of love.” I was struck by the stark clarity of that dichotomy of possibilities. 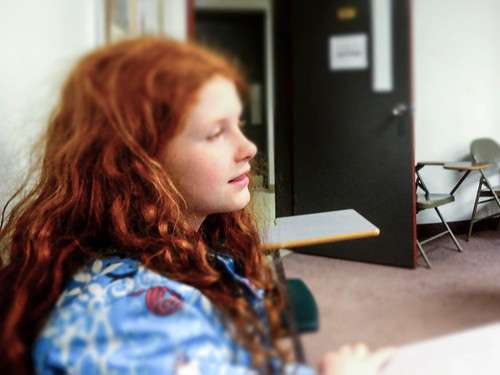 I picked up AppleApple and we headed over to the university, hoping to arrive in time to hear Lisa Moore read. It was really cold last night. We got to St. Jerome’s and discovered in the frigid blowing wind that we’d need $4 in change to park in the lot. I had $1.75. “I can’t believe we’ve made it this far, and we might not get to go!” Luckily we discovered meter parking nearby, and purchased an hour, spending every last nickel we could find in our pockets and in the car. After a quick detour to the library to drop off books (some of them on Andy Goldsworthy, in fact), we settled into chairs: just in time.

“Is this what university classrooms look like?” AppleApple wondered. “How do students fit their notebooks onto the tiny desks?” Lisa Moore, before her reading

I worried a little bit throughout the reading that it might be too intense and at times too imagaic and densely poetical for my 11-year-old, but she listened raptly and clapped with enormous enthusiasm at the end. We were fascinated by Lisa Moore’s answers to questions about her process: she described setting herself a problem when writing her novels, usually of form or structure, that she worked to solve, such as telling the story entirely in flashbacks, or telling the story entirely in a forward-moving trajectory, or telling the story from a cacophony of viewpoints (all different problems for her different novels, obviously). She also talked about being part of a writer’s group, and how important feedback is to her process: she described button-holing family, friends, strangers off the street to read and comment on her work-in-progress. I shuddered to imagine it. My own process is so intensely private. No one reads my first drafts, a) because they’re terrible, and b) because I fear that critique at that early stage could kill or muddle my long-term vision for the project. Discussing this on the way home, AppleApple wondered if I was insecure about my writing in the early stages, or maybe too much of a perfectionist. Either theory might be true. But I guess what works for one writer doesn’t necessarily work for another. I am a meticulous and hyper-critical editor of my own writing. It isn’t that I don’t want critique, but I don’t want it until I know the project is ready for it.

Here was AppleApple’s take on Lisa Moore’s reading: “She had such a good presence. She was very confident and calm, kind of laid-back but also serious. It’s so different hearing someone read their writing than reading a book.”

“Would you like to do that when you grow up?” I asked AppleApple, who certainly has a facility with language.

“Well, I’m going to be doing that again, very soon,” I said. And I realized I’d spent the reading taking mental note of the very things that AppleApple had observed: Lisa Moore’s calm and welcoming presence, her intensity mixed with humour and lightness, her frank and open manner. I was recalling how much effort and discipline and practice it takes to make a presentation like that flow so naturally — how much energy it takes to be the person at the front of the room; a fully present and true version of yourself. And I was reminded that readings can be quite wonderful events to attend. I’m glad we found that parking meter.