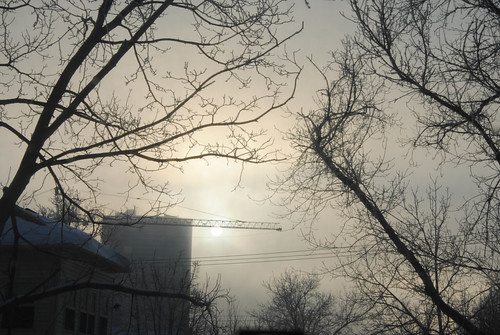 So much on my mind today. I couldn’t shut it down, not even in yoga class this morning. The word I used to meditate as I held poses was “strength.” I want to be strong. I think I am strong. But sometimes I wonder, at what point does “strength” become “unwillingness to appear weak”? Is it better to grit through a difficult pose, or to give in to the desire to rest? Maybe sometimes it’s one, sometimes the other. I heavily favour the former, of course.

I do believe, however, that our greatest strengths are also our points of greatest frailty. So I have to be careful.

Let me tell you about yesterday. It was a pretty crappy day, if I may be frank. Writing time vanished as I had to take one daughter to a doctor’s appointment. Vanished some more due to errands and piano lessons. And then the truck slowly but surely started breaking down. Right in the middle of the fairly complicated back-and-forthing between school, piano lessons, school, birthday party. Three kids were directly counting on me to be in specific locations at specific times.

The truck refused to shift into reverse.

I never realized how frequently I use reverse, when driving. Maybe this is a life metaphor. We’re not meant to be stuck going forward at all times. We need to be able to back up, too.

The situation was stressful. I was worried the whole time and couldn’t find my “happy place,” shall we say. But I recognized, too, that the day was not nearly so crappy as it could have been. Kevin and I worked together as a team. We were only about ten minutes late for the second piano lesson. The truck did not need to be towed. The children adapted to the changing plans. We belong to a carshare!

Home at last, I felt so tired — not physically, but mentally. Fooey wanted to play an imagination game while I was hanging laundry. It was all I could do to manage the most banal responses.

It also happened that I was due to Skype in to a book club in Toronto at 9pm. Well. I made a pot of peppermint tea, brushed my hair, and sat down in my office. We made contact. But we couldn’t work the video. In the end, we decided just to chat. I looked at my own video smiling back at me (not sure whether they did the same), and we spoke for about forty-five minutes. My tiredness evaporated. Their questions were thoughtful, respectful, insightful. We talked about how daughters view their mothers. We talked about being mothers. We wondered, will mothers ever get cut some slack?

I hung up feeling so much better.

I don’t know what’s going to happen with the truck. The two eldest kids wonder: would this be a good time to become a car-free family? “I’ve been thinking about it, Mom, and it would make us be more eco-friendly and more organized….” I’m proud of the values we’ve instilled in them, but, oh, I like having that truck waiting for me on freezing dark mornings when I’m headed for a spin class.

I don’t know what’s going to happen with the book. The editing is so slow. One foot in front of the other. One small step and another and another. Many, if not most, of my writing days are shortened by other necessities that take priority.

I don’t know what’s going to happen with my applications for writing grants and midwifery and The Amazing Race (thanks for watching the video: we’ve had tons of excellent feedback already!).

I feel as if so much of my life is up in the air right now. Strength. I’m calling on strength as I hold this pose.

Side project: Amazing Race Canada audition
The need to sleep