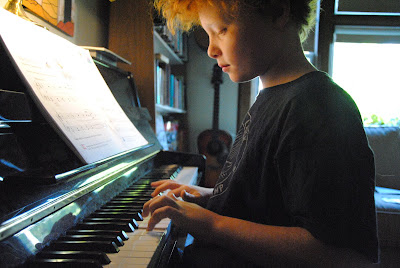 Do reward systems work, as a parenting method? I’ve been pretty firmly against them, on principle. On principle, I believe that kids should do their jobs to help the family out, as participants in a collective effort.

But it turns out that our eldest is highly motivated by reward; and highly not-motivated by his mother’s principles. This summer, to earn money, and completely of his own initiative, he worked for his grandma on several very hot afternoons. The work was gardening, which he blithely ignores at home, but at Grandma’s he threw his whole heart into the job. They went to the library and researched plants. They went to the greenhouse, and he picked out flowers and plants based on his research. Then he dug the garden beds and planted the flowers and plants, and watered them. For which he earned some money. And he took great delight in the connection between working hard and earning a reward.

Which got me rethinking my original no-reward system of family governance (or, more precisely, the-reward-is-in-the-happy-feeling-you-get-from-helping-out-your-family system). I’m not abandoning that system, or the concept of responsibility. The kids do have responsibilities, and important ones, like walking to school, and making sure younger siblings get safely to and from school. And going to bed when told. And doing their homework.

Which brings me around to the grey area of piano lessons. They kind of have to take piano lessons; perhaps they would want to even if the choice were wholly theirs, but the truth of the matter is, their mother wants them to take piano lessons, and three out of four children are doing just that this fall. It’s Fooey’s first year, and A and A’s third. Now, before this round of lessons ever started, Albus heard from a friend that the friend’s piano teacher gives out stickers for “good” practices, which, if enough were earned would eventually add up to actual prizes (Albus heard giant Lego ships; I’m thinking portions of this story might be apocryphal).

But in any case. Intriguing. What counts as a prize? For AppleApple, it’s a book. For Albus, it’s Lego. And what counts as a “good” piano practice? Basically just focus and attention. Also, as a rule, play each song at least three times. Albus was over the moon: imagine getting stickers just for practicing the piano. And I thought, imagine children practicing the piano just for getting stickers.

So I made up sticker sheets for each child (CJ could not be left out, and he actually sits at the piano and hammers away to earn his sticker). The rule is only one sticker can be earned per day. I hope it won’t discourage kids from taking an extra turn on the piano if they are so inspired, but I sensed that sticker madness followed by sticker burnout might quickly occur if limitations weren’t instituted.

Before getting all hurray-for-stickers, I will allow that it’s early days, just the second week of lessons, but hurray for stickers! Piano practice, and lessons, have thus far been completely pain-free, even pleasurable. The only issue is children fighting for time on the piano. Practice has been happening first thing in the morning, before school. Best of all (and this is my reward), the extra practicing is paying off: music is being made daily in our living-room.

Big words
The edits have arrived ...