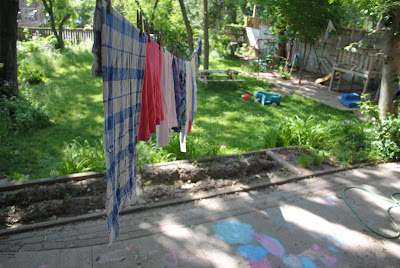 Ever feel like you’re just not into the domestic necessities? I can usually find some smidgen to enjoy in some portion of the daily chores that Must Be Done. But not right now.

Right now, due to soccer-all-the-time, I am washing dishes in a grumpy stupor after 9pm. “Remember when I got to wash dishes right after supper while listening to ‘As It Happens’?” I said to Kevin last night, who was also in the kitchen, putting together lunches for school. “Who knew that was such a treat?”

And hanging laundry–an often peaceful activity, a moment of quiet in a noisy day–right now, feels like a relentless intrusion on my time. There’s so much of it and so many stages to the doing of it: gathering, washing, carrying the basket up and down stairs, hanging inside or outside, gathering, folding. The only thing I refuse to do is to put away the stacks of clothes neatly piled and arranged from youngest to oldest, on my bed. C’mon. It’s the least they can do.

Even cooking is not drawing me these days. I haven’t baked bread in over a week. I’ve been stocking up at the half-off shelf at our nearest grocery store (and because our grocery store is frequented by a lot of students, the half-off bread is usually the best they sell: multi-grain or spelt or Red Fife wheat).

I haven’t baked a cookie, square, or cake in ages. I offered my two youngest a half-bag of cheesies to snack on while we sat waiting in the hallway for AppleApple to be done her final piano lesson. I’d assumed we’d be alone, because the music school is pretty much shut down, but of course there was a mother across from us, watching my offspring coat themselves in sticky orange powder. I pretended no shame.

Maybe I wasn’t even pretending, come to think of it.

I am consumed, right now, by two major projects. One is the triathlon, which will happen next weekend (not this one). I am training heavily, and it is eating a great deal of my time, mentally and physically. What I’ll do after it is over, I just cannot fathom. I can’t really think that far. I love the early mornings, but they take a toll. I would like to get together with friends and enjoy a drink of an evening, again, for example. But meantime, I am aimed like an arrow at a target, with a focus I just can’t turn off.

My other major target, on which I feel just as significantly and undistractedly aimed, is my Juliet Stories, several of which I am reworking in quite radical ways. I am rolling with ideas, especially after a conversation this morning with my editor, and trying to be patient and to work within the limits of the time that is put aside for writing work. I am grateful to Kevin, who is taking over everything this weekend, so that I can write.

And so the kids are eating cheesies, and I am resenting the laundry, and we are doing a lot of last-minute barbequeing.

I just realized something. It’s not pretending. There’s no shame. I’ve lost whatever guilt I once had, as a mother, about pursuing interests that don’t revolve around my children and my household. Right now, I am wired tight as can be, focused, excited, energized, exhausted, stretched, and it’s all good.