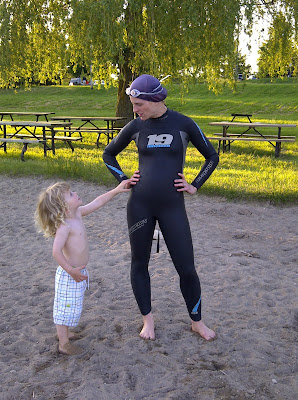 Day One: The Idea
Tonight in yoga class I felt strong, fit, stable. It was a wonderful feeling, a feeling of digging deep inside my body and working with it, in a very submerged fashion. No worries, no thinking about being somewhere else; my focus for the class was “patience.”

Afterward, in the shower, I thought, I’d like to be in the Olympics. But I’m thirty-five years old. Is it too late? Um, yes, endorphins, it is. But then I thought, okay, it’s too late to be in the Olympics, but it isn’t too late to train my body to do something it’s never done before … like becoming a triathlete. The thought jumped ahead: and it’s not too late to write another book, a completely different book from the ones I usually write. This one won’t be made up. It won’t resemble fiction at all. I’ll write about this–this exact idea, and about how I go about doing it. I’ll stop saying that I’d like to run a triathlon, and I’ll just go ahead and do it. I’ll do it and I’ll write about the process.

Some little time later, getting dressed, drying my hair with a towel in front of the mirror, I thought, this is one of those things that you’d never do if you knew how hard it was going to be.

I am thirty-five, relatively fit and active, but I’ve never run a race longer than 5 kilometres. That was nineteen years ago. Another obstacle: I can’t swim. I took one week of swim lessons. And failed. That was twenty-seven years ago. My kids swim better than me: I’ve forced them into the pool in all seasons and against a good deal of grumbling because goshdarnit they are going to know how to swim.

Is it too late for me to learn? Can I swallow my pride and hop into the water and take adult swim lessons? Swim laps, learn to turn my hand the right way, breathe to the side, kick the proper kick?

What else do I need to learn to do in order to complete a triathlon? I know how to run, but my feet get hot after an hour’s worth. Do I need to look into special equipment, a special diet, training regimens? Where will I begin? Alone?

But sitting down before the computer to brainstorm and write, I can think of nothing but obstacles. The idea sounds ridiculous. I might as well be typing out a bit of fiction.

Time. That might prove the biggest obstacle of all. My youngest child is two. What’s he going to do while I’m at swim lessons? Am I going to send him to daycare in order to train for a race that I really don’t need to run? I imagine getting to the end of the story. I imagine discovering something new and amazing, experiencing pain and suffering (self-inflicted) and arriving at an emotionally salient insight. A big one. Significant. Uh oh. What if the insight is: go back to looking after your family, you ridiculously selfish woman? You were riding a bicycle while your two-year-old turned into a three-year-old, and you missed experiences that cannot be replaced or found again.

My husband thinks it’s an awesome idea. Maybe he’d like to join me, and do it too.

And tomorrow, 325 days later, I will compete in my first triathlon. I’m not destined for the Olympics (sorry, self), but I haven’t regretted anything about the process so far. I’ve enjoyed a small writing gig out of the material (though probably will never write a whole book). And the three-year-old is doing just fine. I’m just so grateful that this idea came to me, that I considered it seriously, accepted it, and pursued its existence into reality.

Thanks for your good wishes! And thanks especially to those who joined me along the way. Here’s to Day 325.

Sport and Art
Day of Triathlon