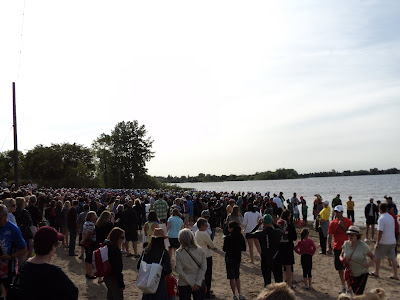 The crowd of competitors on the beach, just before the race starts. I’m at the back. With my jaw dropping. It was a beautiful sight. So overwhelming that I kind of got lost in it, and forgot to put on my goggles. Remembered after I’d swum about 100 metres. Gee, I can see really well, but I have to keep closing my eyes underwater. 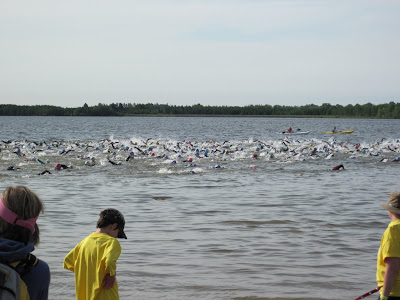 Again, it was just awe-inspiring to see the churning arms and bobbing heads, and all the waves. Weirdly, I felt no hesitation or fear running after the pack into the water. I said to a woman nearby, “Isn’t this beautiful?” 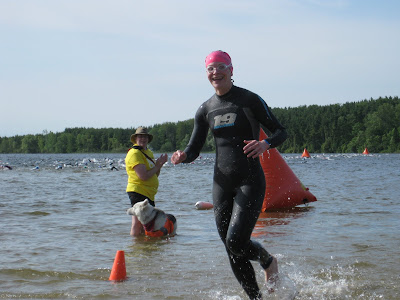 Totally geeky photo, but I guess this is what I look like in goggles. Now you know. The pink cap indicates that I estimated my swim time to be between 33-35 minutes, which was the second slowest group. Should have taken that white cap, because what with the wind and the waves, I actually got lost at one point and swam for the wrong buoy. Lost a few minutes. The 1500m swim took me 38:41, but I think that includes the arduous run up the hill to the transition zone. Hardest run of the day. I felt absolutely exhausted and couldn’t catch my breath. 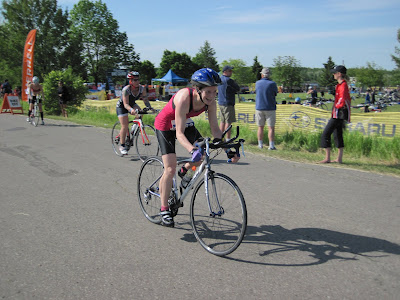 Until I hopped on the bike, that is! I love cycling! I was so emotional here, at the start of the bike race. I almost wept. I’d finished the swim! 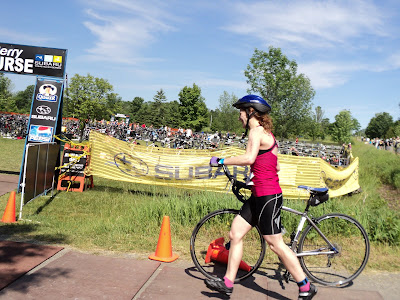 Finished the bike race on a high. Forty km in 1:18. I felt so powerful. My knack for climbing hills came in handy, and the weird thing was that I got faster and faster as the race went on (or else the people in front of me were getting slower). If it hadn’t been for the strange ticking noise my bike started to make with about 15km left, the whole ride would have been pure pleasure. I was thankful to have no mechanical issues in the end. I really felt I like I could have kept going and going and going. 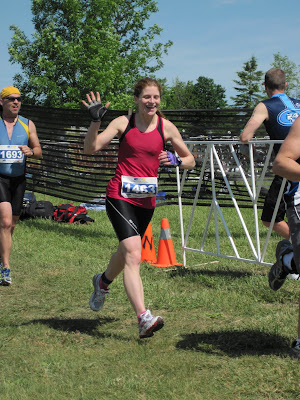 Which is a good thing, because I still had some race left to complete. I do run 10km regularly in training, but it must be said that it’s very different to run it post-bike-ride. But the “brick” runs came in handy (training runs immediately following bike rides), and my legs made the transition without much complaint. By two kilometres, they were ticking like normal, and I thought to myself, Hey, I know how to run! That’s when I picked up my pace. I pushed as hard as I could, though the last couple of kilometres were, well, gruelling. I used every mental trick available: feeling gratitude for the hours put in, picturing my children, and, finally, just running like I was doing a solo run–I always run hard on those. 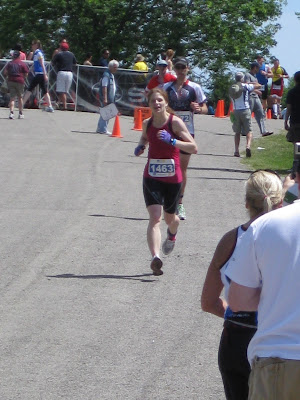 The race organizers kindly arranged for the final couple hundred metres to be oriented downhill. I could hear my friend Tricia and her husband Jeff (who took some of these photos) and then my own family (including my mom!) calling out my name, and I just sprinted as hard as I could. The time on the clock was 2:53:17, under three hours, like I’d hoped. 10km run in 51:23 (not sure whether that includes transition time after hopping off bike, but if so, it’s close to my PB). 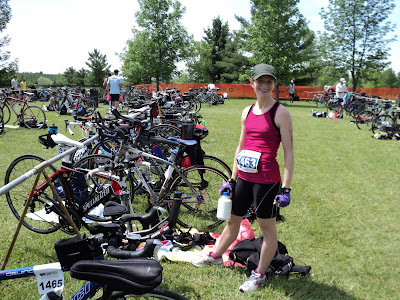 Packing up afterward in the transition zone. Note the bike gloves. I couldn’t rip them off fast enough after the cycling, and then I forgot they were there. Ah, the face of a happy woman. Holy bleep, people, I actually did it!