A Week in Suppers: 7 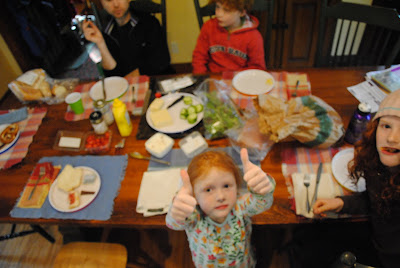 Monday supper. Bailey’s food pick-up! Hurray! And thumbs up all around. Buns, cheese, ham, salad greens, a sheep’s milk cheese spread. Lemon loaf for dessert. This was a good end to a day that included standing by, dripping wet in my swimsuit, whilst my youngest wept his dear heart out in the pool. When we got to the showers, 15 minutes later, there was no water. None. Lovely to get home to a non-grumpy husband. He had decided to change his attitude about the Bailey’s pick-up, to “think like Carrie” and check for every item on the list, and not to be in a hurry. He did not have to go back to pick up even one forgotten item. Yay! 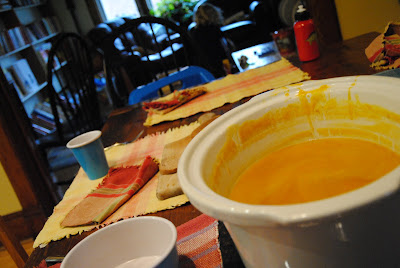 Tuesday supper. Coconut sweet potato soup. Very very gingery and spicy and delicious. Recipe on the blog, here. I skipped out on supper and went to yoga instead. I was surprised, on returning home, to discover that the soup had been popular with almost everyone. It had a good bite to it. Of course, there was bread on the side, just in case. We attempted to carpool to soccer, and AppleApple was ferried there by another parent, but when I went to pick the girls up, it turned out that the other child had left already with her dad. (Maybe I should have arrived early, too??). It was so cold that AppleApple was quite literally frozen. She had to cry as her toes thawed out on the drive home. I held them in one hand while I drove, and that seemed to help. And of course, we stopped for a hot chocolate, just for her. None of the other kids complained. They understood. It was 2 degrees and raining. I kid you not. Those soccer kids are tough. When I asked, “Are you crying because it’s just too hard?” She said, “No, I’m crying because my toes hurt.” And awhile later, she mused that though she loves soccer, she would draw the line at losing her toes for soccer. Kev ended the day with his last hockey game of the season. Now he will add a second night of soccer to compensate. 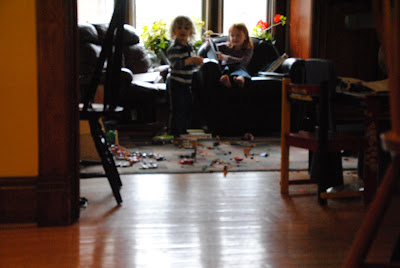 Wednesday supper. This is not a photo of Wednesday’s supper. This is a photo of the little kids playing and reading while the noodles boil for Wednesday’s supper. Beef stew with potatoes and yams, in the crockpot. The flavours were exotic and, frankly, delicious, but not one of the kids ate more than a small, token bowl. The spices included: cloves, cinnamon stick, whole pepper corns, and fennel seed. Kevin and I enjoyed the leftovers for a few days. It was a full writing day for me, and I worked hard on a new project, which I plan to announce tomorrow, if all goes well. I left the writing cone of silence to head directly to music lessons with a load of children, and then Kevin had a soccer coaching clinic from 6-9. That meant supper alone with the kids, and bedtime too. My brother Karl came over after supper for guitar and drum lessons, and he kindly drove Albus to his piano lessons, and then Albus walked home (it was still light out at 8pm). That eased my evening a great deal. I was in my pajamas as soon as the kids were, though. Four early mornings in a row this week. 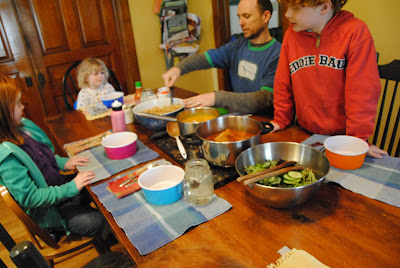 Thursday supper. More pasta. Leftover exotic beef dish. Leftover soup. Green salad. Yum. Oh, and also super-easy. The kids loved it too. I had such a sweet morning. I swam early, I napped early, I took the kids to a friend’s house to play, I got a massage on my painful shoulder (one of my friends is a massage therapist!!), I went straight from the blissed-out massage (in the middle of the living-room floor, surrounded by curious children) to a chiro appointment, and the shoulder pain eased significantly following that one-two punch. Then the kids and I nipped into the grocery store, but we were running late by that point, and did not make it home in time to meet with the a potential porch contractor. Oh well. The afternoon went from there: playdates and happy home-walkers and relaxed supper prep and mealtime, and then Kevin and I went to our last kundalini class of the session together. I am sad that it’s our last, but alas, soccer season has its demands. The class celebrated with champagne and brownies and fruit. I will miss it! 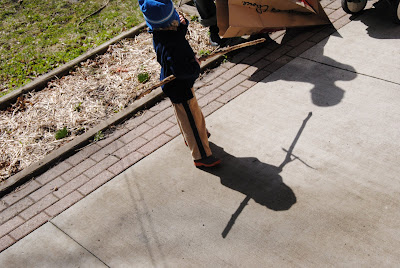 Friday supper. This is not a photo of Friday’s supper. Or even of Friday (I forgot; I spent a large portion of the day writing, with Kevin home for the holiday, then I dashed to yoga, then the kids went for a sleepover at their grandma’s, all except the littlest, whom we picked up before bedtime). So this is a photo of the next morning, when it was just two parents and one giddy-at-his-fortune three-year-old. For supper on Friday night, Kevin and I went to Ye’s all by ourselves, and super-early, because we were soooooo hungry and that’s what we felt like doing. Ye’s = all-you-can-eat sushi. Then we caught up on tv shows. Happy day. (But we didn’t tell the kids where we’d eaten because we knew they’d be jealous; luckily they do not read this blog; to my knowledge, that is). 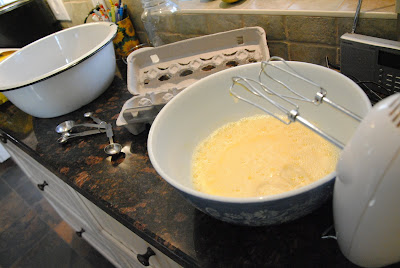 Saturday supper. This is not a photo of Saturday’s supper (striking out again!). This is photo of the paska that I started on Saturday, then let rise when we went to pick up the kids from grandma’s, then let rise again when we went to our first Easter meal of the weekend: ham, scalloped potatoes, corn, etc., and none of it cooked by me. Perfect. I stuffed the oven with loaves of paska and baked them all upon getting home. The recipe made rather more than I’d anticipated. Yum. Dessert and school lunches taken care of for weeks to come. 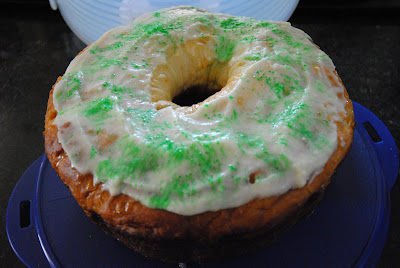 Sunday supper. This is not exactly a photo of Sunday’s supper; but it stands in as a good representation. This is one of my finished loaves of paska, frosted with sprinkles, whoopee! My first attempt at paska was several years ago, and it was a big-time refuse-to-rise hard-as-a-puck fail. My second attempt, this weekend, was far better: a doughy, sweet, citrus-flavoured bready cakey treat. I took a round loaf to our second Easter gathering, which was more of a lunch meal: paella, scallops, steak, salmon, potato salad, and none of it cooked by me. Perfect. We were still stuffed at suppertime, so we made a batch of popcorn, cut up some apples, and served paska for dessert. And ate everything in the living-room in front of a movie. And thus ended our Easter. (Though the kids are still working hard on the candy; and we plan to have devilled eggs, perhaps for supper tomorrow night).