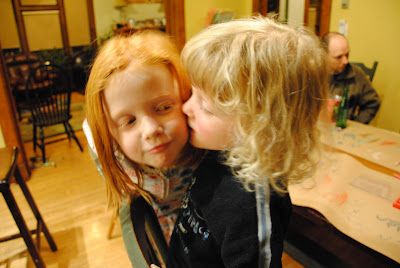 Temper. Blaming. Complaining. Comparing. Name-calling. Stubbornness. Picking on. I’ve just been lying here, post-early-morning-exercise-nap, thinking about the negative behavior that can sometimes be observed in my children … and it occurred to me: wow, I’m guilty of much of that same behavior, only in more subtle, grownup ways.

Example. Blaming. I have a habit of saying, “Someone must have done such and such.” Someone forgot to close the front door. Someone’s made a mess of the bathroom. Someone must have put the scissors in the wrong drawer. What I’m saying is: hey, I didn’t do this and therefore one of you lot must have! Hardly a productive response to any situation, and not so very different from one child saying to another, “You lost my [insert precious possession here]! I know it was you! It was here when I left and now it’s gone!”

The opposite of blaming is taking responsibility. As I tell the child, owner of said precious possession, “If it’s very precious to you, you need to keep it in a special place, and not on the counter.” And if I don’t like that someone’s made a mess of the bathroom, I need to instill a greater sense of ownership and responsibility in my children for keeping the house tidy, rather than grumbling while cleaning it up all by myself.

(If someone can tell me how to do that–how to instill a sense of responsibility in my children–please let me know).

I’d like to think I don’t call names. But I do say things like “that was a dumb thing to do.” Which is next-door to name-calling, and even if it’s true (which let’s face it, in some situations it just might be), if dumb isn’t a word I want kids to use, why am I using it?

I won’t go through the whole list, calling out each of my less-than-worthy-role-modeling. Instead, I’m thinking about the alternatives.

Okay. Blaming. Taking responsibility.
Temper. Finding other expressions for emotional distress or disturbance. Apologizing as immediately as possible after the fact is helpful, too. Nobody’s perfect.
Complaining. Thinking of ways to change the situation causing the complaint, or at the very least to change my response to the complaint. There is always something that can be done.
Comparing. Celebrate and consider each family member as an individual.
The opposite of name-calling? Uh. Don’t do it, I guess. (Though there are some situations in which name-calling and poking fun can be positives and can reinforce relationships, and in fact are markers of a trusting and close relationship).
Stubbornness. Flexibility.
Picking on. I don’t believe that I do this. But I do see it happening in my family: two siblings subtly teaming up to bait another sibling. Not pleasant. And we call it out and separate them, but haven’t found a better way of curbing it. Maybe maturity will do the trick. I remember my brother and I picking on our younger brother (who we just knew was our mother’s “favourite,” and who was so darn cute and better behaved than us). And we’re all good friends now.

A week in suppers: 2
Actual conversation with actual child (who shall remain nameless)