A week in suppers: 2 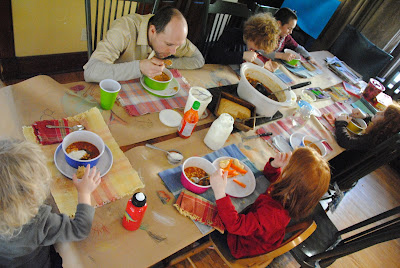 Monday supper. Veggie beef soup in crockpot (made with one steak that simmers all day in the tomato-y liquid until it is rendered meltingly soft). Cornbread. Cut up raw veggies. Albus doesn’t like cornbread, which is a pity, but there’s always someone who doesn’t like something. Fooey didn’t like the soup–too much corn. The corn and green beans were from last summer, frozen. That’s it for the green beans. Albus had a friend over for a sleepover. They went to bed very sweetly and slept soundly until about 5 the next morning, when they woke up and decided to play wii. Mama Bear, up for an early spin class, did some growling, and they turned it off and went back to bed. For half an hour. It’s the thought that counts. 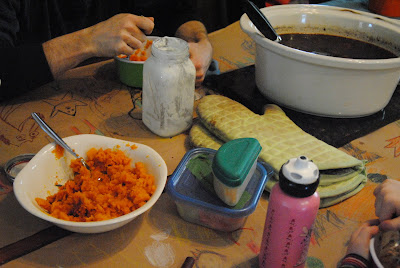 Tuesday supper. Chili in the crockpot. Were the black beans leftover from the week before, or did I cook them up fresh on Monday? I can’t remember. I also made yogurt at some point this week, perhaps today. I made a vegetarian version of chili, with few additions. Baked rice and baked squash on the side. The squash was divine–one of the last remaining in the cold cellar, a sweet keeper variety. I love a good orange veggie in this lean month of March. I also baked a tray of ginger cookie-bars that morning. We’d had friends over for lunch (leftovers and sandwiches), and I was tired, on this the second day of March break. Not so much napping with all the kids home. I skipped yoga and went to bed early. 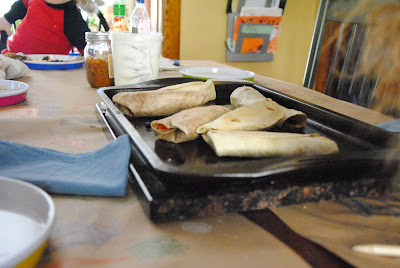 Wednesday supper. Tortilla wraps baked in the oven, using the leftover beans from the chili, the leftover squash, the leftover red peppers, the leftover rice, and some freshly grated cheese. Assembled by Kevin, who came home early so that I could go to a yoga class and regain my sanity. Big thumbs up from everyone. I ate late, alone. Kevin made two especially for me, and heated them up for me when I got home. He also did the dishes. Then we watched a movie together as a family: School of Rock. Must be said, I’m starting to enjoy March break. 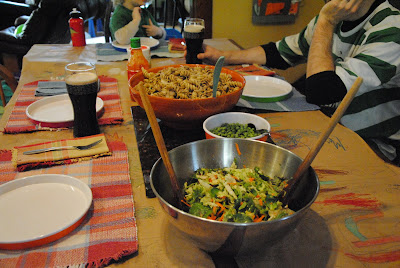 Thursday supper. Spring is in the air! And drunken university students are stumbling in their green mini-skirts down the street. Must be Saint Patrick’s Day. I took the kids to a movie this afternoon: Yogi Bear. Supper was simple and good. And green. A big bowl of pasta with homemade pesto (toasted pecans and sunflower seeds, basil from the freezer, olive oil, two cloves of raw garlic, salt). Buttered green peas, frozen last summer. A big green salad using up the last of our local greens from Bailey’s buying club. Apple-Apple said it was the best dressing ever (olive oil, cider vinegar, maple syrup, salt, and tamari). Fooey said the pasta wasn’t green enough. The cook’s feelings were hurt, and Fooey wasn’t invited to the table until she apologized. We have a rule: no complaining about the food that is set before you. Well, smallish complaints are okay. It’s okay to say, for example, This isn’t really my favourite. It’s not okay to say, Yuck! Disgusting! There is not way I’m ever going to eat that! Add: That pasta is not green enough! to the verboten list. (Especially if said with a certain whiny disgust and disdain). The good news is: she apologized. The other good news is: Kevin discovered two cans of Guinness in the basement. 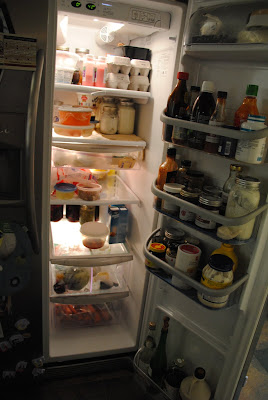 Friday supper. “Leftover surprise.” In other words: I cleared out the fridge (this is the after photo). It was actually quite a spread. Leftover pasta with pesto. Two kinds of soup (the chili, without the majority of its beans, was a bit thin). A fresh loaf of bread gifted to us by a neighbour. Cheese, butter. The kids had skating, but no soccer. The evening was blissfully free, so naturally I filled it with baking: I made granola and breakfast pitas. After the kids were in bed, Kevin and I caught up on my favourite tv shows (currently): Parks and Rec, and 30 Rock. 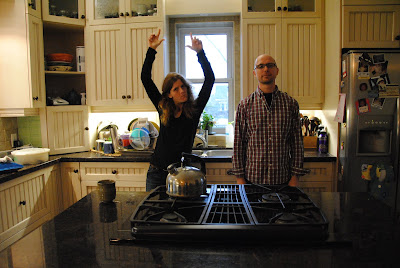 Saturday supper. Macaroni and cheese, baked in the oven. The kids ate it, and I didn’t take a photo. Instead, I took a photo of me and Kevin dressed up and ready to go out for supper at a fancy restaurant uptown. Whoo-hoo! (Though after the photo was taken, we both changed our minds about our outfits and fancied ourselves up a bit more). The day contained a strange mixture of activities: I ran 18km in the morning, came home and quickly showered and changed to go to the funeral for my kids’ crossing-guard, came home and picked up all the toys spread all over the house after a week of March breaking (with help from Kevin, but sadly, very little from the kids–which is our doing, not theirs–we need to get them helping more regularly), and then I made supper for the kids. Kevin and I ate a bowl each, too, because our reservation wasn’t til 8:15. For my supper, I had: a mojito-like martini, smoked salmon with house-made onion rings, a salad of escarole and sheep’s milk cheese, a sirloin steak with green beans and potato croquettes, and an apple donut-like dessert with whipped cream, with the first three courses paired with wines, and the last with a decaf cafe au lait. Put your hands in the air! 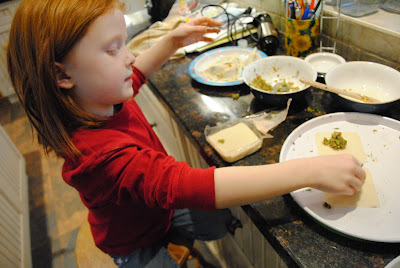 Sunday supper. Fooey’s menu: make-your-own-soup, with steamed homemade wontons, noodles, spinach, bean sprouts, and shrimp. I helped season up the broth, which was made from frozen homemade stock (I added miso and tamari). Kevin and Fooey are wonton experts–this is the second time they’ve made them, and he grinds together shrimp, spinach, ginger root, cilantro, and last night he added leftover peas when the stuffing ran low. Thumbs-up from around the table. Something for everyone. Kevin and I tag-teamed the dishes, and ran around like chickens with our heads cut off trying to get organized for school/work/routine the next morning. It was a late night, but I went to bed with the feeling that everything was under control.