A week in suppers: 1 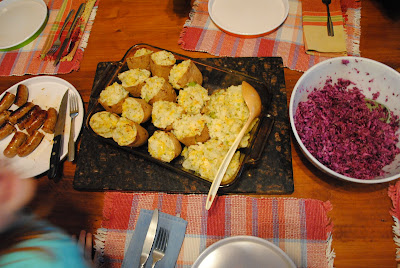 Monday night. Twice-stuffed potatoes, sausages, red cabbage salad. Potatoes leftover from Apple-Apple’s supper the night before. Excellent re-use of leftover baked potatoes, sliced in half, emptied out, insides mixed with cheese, crema, and mashed up brocolli and cauliflower. Red cabbage salad recipe from a friend (onion, mayonnaise, vinegar, and maple syrup). We cut each sausage in half, because there were only five. Kevin and I got one half each and the kids divvied up the rest. 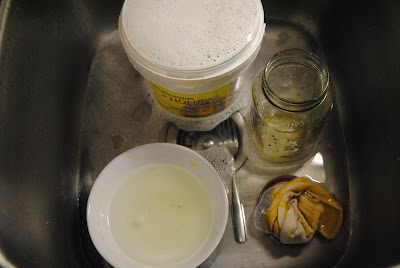 Tuesday night. I ate alone. The kids went to a pancake supper at their grandma’s church, with Kevin, while I went to a yoga class. I made a house-favourite, mashed-potato soup, to be served as supper the next day. This “mashed-potato” soup contained quantities of squash. Basically anything goes into this soup, which does contain potatoes, too (though not mashed). Once it’s cooked, I zap it with a submersible hand-held blender, and hurray, instant happiness around the table. But I ate a bowl alone, tonight, and stored the rest in the fridge. 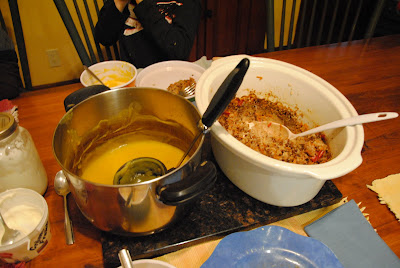 Wednesday night. Wednesday is always a crockpot supper. I tried out a new recipe with underwhelming results: a lentil and rice pilaf, which would have been far superior cooked on the stove. It was mushy, though smelled pretty good while cooking (cinnamon stick). Luckily, there was also mashed potato soup to warm up and serve. We ate together, between music class and Apple-Apple’s soccer. 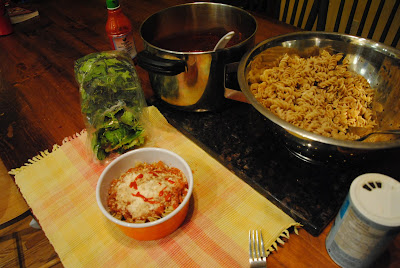 Thursday night. I ate alone. The family ate pasta with red sauce. Kevin forgot to put out the greens. I cooked up the red sauce from scratch earlier in the day, and Kevin cooked up the noodles. It’s a good meal for the evenings when I’m out at yoga class. Which is where I was. I came home, and devoured a couple of bowls of pasta, along with the greens. That night, our youngest got sick, so we cancelled our babysitter and I missed kundalini yoga. 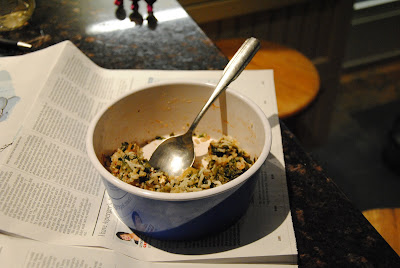 Friday night. I ate alone. This is starting to look like I eat alone a lot, but I feel like this week had to have been an anomoly. Kevin took the two girls to a pizza supper at one of our churches, Albus was at a friend’s house for pizza followed by the boys’ soccer (lovely parents feed our boy pretty much every Friday), and CJ was home with me, sick. I fried up a package of frozen spinach with cumin and garlic and onions, and ate it over leftover quinoa. Then I ate two pieces of pizza, which Kevin brought home for me. Kevin dropped off Fooey, and immediately left to take Apple-Apple to her goalie practice (soccer, again). Did I mention the pre-supper skating? The kids were all worn out. But also excited, because it was the start of their March break holiday. 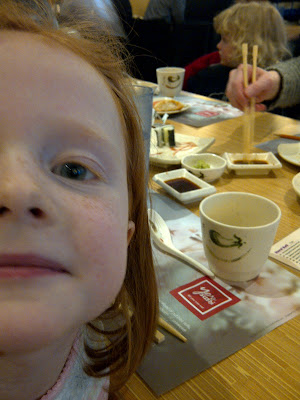 Saturday night. Supper out! We went for all-you-can-eat sushi, and ate our money’s worth. Even CJ, who was still sick, discovered a fondness for cucumber maki, and ate at least six. This was such a treat, and it felt like we were on holiday, for real. We pretended we were at Disney (a place I fully intend never to go). I don’t know why, but it really felt like we were in Florida. We stayed for almost the full time limit, and everyone was beautifully behaved, not greedy, and shared the food. When we went home, we had a family drawing time at the dining-room table, and then a short dance party in the living-room. Considering the still-sick child, and the interrupted nights, and the 16km run that took up a large part of my afternoon, it felt like a real holiday. 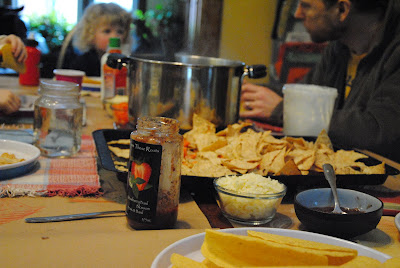 Sunday night. All I wanted was not to have to cook supper. Yay! Kevin did it. CJ and I took a nap in the late afternoon, tucked up together in a chair. Kevin made tacos with black beans (which I’d cooked earlier in the day), and hamburger, and lots of fixings. It was an excellent meal, but with the time change, we realized it was nearly 7pm by the time we’d finished, and therefore too late for our planned family movie night. The kids were disappointed, but we let them watch part of a Harry Potter movie, while I did the dishes and the laundry. Everyone got to bed late, but slept soundly. I woke up feeling much more like myself again.