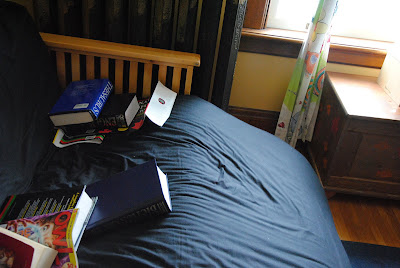 I put this on Facebook, so forgive the repetition between social media. Yesterday evening, I attempted to get all the kids in bed early, but the older two are used to staying up til 9pm. I pictured myself in pajamas and under the covers before that hour, so I requested that they put themselves to bed. They could read in the office/playroom, and they could use Albus’s watch as an alarm clock so they wouldn’t lose track of time. They were pretty pleased with the idea, and when I came to check up on them, the alarm was set, and the two kids were sitting together on the futon surrounded by books. Heavy books. Books from my office shelf.

“What are you guys doing?”

“We’re playing a fun game!” said Apple-Apple, and she went on to explain that she was looking up words in the thesaurus and reading out all the similar words, and Albus was guessing the original word–to which end, he had several dictionaries on the go.

I’m sure there are equivalant moments of delight for hockey parents and soccer parents and musical parents, and etc. This was just such a moment for me. My kids, playing with words, spontaneously, for fun.

One of the books in the pile is a book of fairly tales–originals–which I bought a number of years ago when I was a grad student interested in the history of children’s literature. Earlier this week, Apple-Apple said she’d been trying to find real fairly tales at her school library, “not the Disney kind,” and I remembered this book. She’s been poring over it, very excited to be reading the “real” stories, though I need to caution her that in the case of fairy tales there probably is no “real” version, in the sense of there being an absolute original. That could be the start of another interesting conversation.

On a different subject altogether, I am thinking about people in Libya and Japan, among many other troubled places here on this planet of ours. Thinking, praying. The security we hold to and assume to be rightfully ours is so fragile. I am not sure whether it is right or wrong to feel gratitude for the ordinariness of today, with its ordinary problems and ordinary pleasures that might not seem so ordinary under different circumstances. But I do feel gratitude; it is mingled with a kind of helpless grief.

Dear Blog, I Miss You
A week in suppers: 1