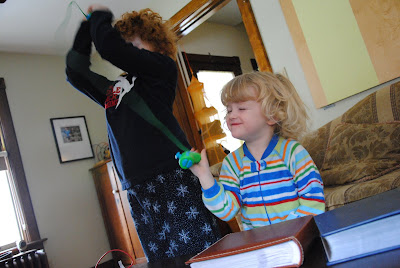 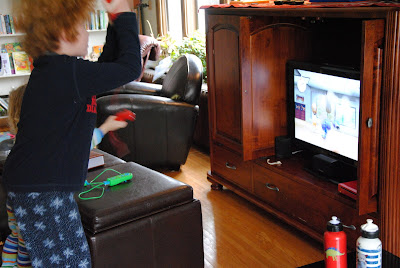 Did I ever tell you (confess might be the more appropriate word) that we got our children a wii for Christmas? Yes, despite my determined rhetorical stance against electronic gadgetry, screentime, and giving in to the whims of trend, after much consideration and discussion, Kevin and I decided to get a “family gaming system.” Even just typing out those last three words makes me sigh. Kevin was the more enthusiastic of the giving parents, but I did indeed agree. What swung my vote was the fact that the children were already exposed to screens in a variety of forms. They watched movies, and played games on online sites like Poptropica and TVOkids. Albus played a computer game on Saturday mornings with the others gathered around the tiny screen to watch. We had limits in place on these other uses of the screen, so we figured we could treat the wii in the same way.

And it’s been … fine. Actually, in some ways–not to endorse family gaming systems–it’s proven to be a place of bonding between siblings.

Here’s what’s happening right now: Albus is playing a game with CJ that is easy enough for CJ to play, too. They are active and bouncing and laughing and taking water breaks. I’m not saying this bonding couldn’t happen in many other ways, because it can and it does. But this is okay, too. Okay. Guess that’s as enthusiastic as I can get in my acceptance of the family gaming system.

Compromise. Even I can do it.